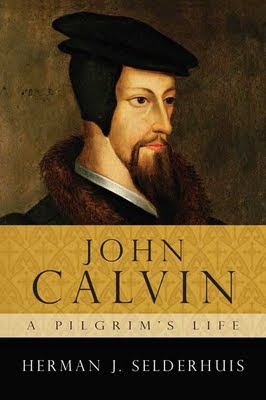 John Calvin: A Pilgrim's Life,
by Herman J. Selderhuis, IVP, 2009, 287pp
With this year being the 500th anniversary of Calvin's birth it's a good time for a fresh appraisal of his life. The secondary literature on Calvin is prolific, but Selderhuis bases this account mainly on his reading of the Reformer's copious correspondence. He claims that the way to get under the Calvin's skin is through his letters. Has Selderhuis succeeded in his aim, does he give his readers a glimpse into Calvin's interior life? He certainly has a good try.

The Calvin who emerges through these pages is neither a flawless Reformation hero or a vindictive heretic burning fiend. Those looking for hagiography or hatchet job will not find what they are looking for here. Selderhuis paints a richly detailed portrait of Calvin as a fully paid up member of the human race. We are introduced to Calvin the student, refugee, preacher, friend, husband and leader of the Reformed cause. Calvin was a sinner saved by grace, no more and no less. He was capable of showing kindness to those in need. He was a good friend and patient in afflictions. He enjoyed a good wine and knew what it was to laugh as well as grieve. He was unswervingly loyal to the truth as he understood it. But Selderhuis does not flinch from revealing some of the less savoury aspects of Calvin’s character. He could be bad tempered and petty. He showed monumental misjudgement in the Servetus affair.

The book follows the narrative flow of Calvin’s story taking us from his childhood to his monumental labours in Geneva. His life is described against the backdrop of the tumultuous years of the Reformation period. Selderhuis carefully pieces together Calvin’s early days, showing how his humanist education impacted on his work as a Reformer. His love of brevity and clarity of expression can be traced back to the formative influence of the humanist school. Renaissance ideals drove him back to the sources of Scripture in the Hebrew Old Testament and the Greek New Testament.

Selderhuis gives us some fascinating insights into Calvin's personality. The Reformer is often accused of being a control freak, the “Caesar of Geneva”, who always had to have his own way. But as it is pointed out, a key aspect of Calvin's character was that of almost unquestioning submission to father figures. It was at the behest of his father that he gave up studying for priesthood to pursue a law degree. Calvin meekly complied with this change of direction in his studies. Likewise it took another rather insistent father figure in the shape of Guillaume Farel to persuade Calvin to abandon a life of scholarly seclusion in order to help lead the Reformation in Geneva. When it turned out that the Genevans did not want a Reformation of the kind envisaged by Calvin, they swiftly booted out of the city. When the good people of Geneva decided that they couldn't live without "that Frenchman" as they called him, they invited Calvin to return. He was somewhat reluctant to leave Strasbourg, where he was happily engaged in pastoring a congregation of French exiles. The prospect of returning to the place that had earlier caused him such grief was none too inviting. But when Martin Bucer decided that Calvin should go back to Geneva, he submitted to his fatherly advice as if it were the will of God.

Doing God’s will, even when God’s plans clashed with his own was a determining factor in Calvin’s life. Armed with the certainty that he was where the Lord wanted him to be, Calvin was willing to endure all things for the sake of the gospel. He threw himself unstintingly into the work at Geneva. He preached not only on Sundays, but also frequently in the week. He delivered lectures to students and corresponded with other Reformation leaders. On top of all that he took time to offer practical assistance to needy people. He barely had a spare moment to himself. Calvin carried on with his work in the face of ill health. A chapter on Calvin the 'Patient' details his various ailments and infirmities. 2 Corinthians 12:9 comes to mind.
Despite what some have suggested, Calvin didn't always get his own way in Geneva. Even during his second period of his ministry in the city he faced numerous problems. They didn't even award him citizenship until 1559. His attempts at reforming the City and its Church were often frustrated. He wanted a self-governing Church that was free from state interference. This was a long time in coming. But at last the City authorities granted the Church the right to exercise discipline over its members and ban impenitent sinners from the Lord's Table. As Calvin had argued for many years, the power of Church discipline should reside in the Church, not with the Magistrate. The Reformer was prepared to suffer hardship and opposition in the service of his heavenly Father. As the book’s subtitle suggests, he saw himself as a pilgrim whose life in this veil of tears was a preparation for the glory that is to come.

While this isn’t strictly a theological biography, Selderhuis discusses Calvin’s theology with sensitivity and care. Misunderstandings are cleared up and prejudices challenged, enabling the reader to get a handle on key aspects of the Reformer’s thought, such as predestination and the Lord's Supper.
Selderhuis writes with clarity, verve and wry humour. Those who know Calvin mainly from his Bible commentaries and the Institutes will be introduced to the man behind the books. He was a rounded yet flawed human being, a sinner saved by grace alone. The writer has a fund of sympathy for his subject, but rightly he does not bend over backwards to exonerate Calvin when he feels that he was in the wrong. If the biographer does succeeded in getting his readers under the Reformer's skin, he promises to let us out again. You'll have to find out for yourself whether that promise holds good.
Calvin’s rich legacy is of lasting benefit to the people of God. We could do with his God-centred theological vision, dogged determination to serve the his Master, and tireless zeal for the Reformation of the Church. We have cause to be grateful to the Lord for “that Frenchman”. Through this compelling account of his life, he challenges us to follow him on the pilgrim road to glory.
Posted by Guy Davies at 8:00 am

Great review. I haven't had the chance to read the book myself yet, it's still sitting on my shelf. Selderhuis came to visit our seminary earlier in the year and he gave a few lectures on Calvin. Very interesting stuff. If you're interested, you can find them on the RTS iTunes site.

By the way, I always enjoy your book reviews. They're thorough and thoughtful. I appreciate them a lot.