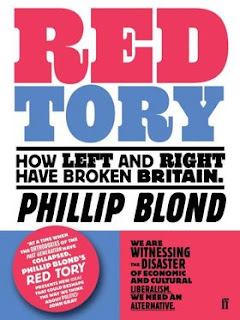 
By their Gurus you shall know them. Will Hutton's The State We're In influenced the thinking of new Labour in the 1990's. Although it has to be said that rather than take on board his radical proposals for restructuring the economy, almost all Labour seemed to do was pinch his catchword, "stakeholder" and use it as a label for a cheapo pension product. If they'd paid more attention to the substance of his argument against City obsessed laissez faire capitalism, maybe we wouldn't be in the state we're in today. Blond is the man behind David Cameron's talk of the "Big Society" where, "We're all in this together". No, our Great Leader hasn't been watching to too much High School Musical, he's been reading Phillip Blond. Interestingly, some of Blond's ideas on the associative civil sate have more than a passing resemblance to Hutton's stakeholding economy. Blond argues that state employees should be empowered stakeholders in the service they provide rather than salves to centralised controls and targets. In a further twist, Hutton, whose book was a damning indictment on Thatchernomics has been appointed to lead a review of public sector pay of behalf of the Lib-Con coalition. Gurus eh?

Anyway, Blond's book attempts to do exactly what it says on the cover, which is to show that both left and right wing policies have broken Britain and then put forward some proposals for putting the country back together again. The author is presently director of the think tank ResPublica. Prior to becoming a full time policy wonk Blond was a theology lecturer, teaching at the Universities of Cumbria and Exeter. Blond's work is informed by his Christian theology, but is not explicitly based on engagement with the text of Scripture. In fact, in the one place where he alludes to the Bible  - "the truth...shall set you free" (on p. 161-162), he attributes the words to St. Paul rather than Jesus (see John 8:32). Blond is an Anglican.

The writer begins by describing 'Broken Britain', setting out the economic, political and social mess we're in. With both public and private debt at record levels something has gone badly wrong with the economy. Participation in politics is at an all time low as evidenced by the declining turn out at successive General Elections. The parliamentary expenses scandal has further undermined the public's trust in politicians. Too much power has accrued to the centre, distancing government from the people.  The social fabric of the nation has been torn apart by the evils of poverty,  welfare dependency and family breakdown.

Blond rightly identifies the breakdown of marriage-based family life as one of the major factors in the shattering of British society. Marriage is often seen as an outdated institution, derided by the sexually liberated as repressive and feminists as oppressive to women. But, refreshingly, Blond argues that marriage is in fact a socially progressive institution and that widespread marriage breakdown has been a disaster for women and children,

For the family offers the site of both sharing and nurture: it is where people learn to limit their desires and give to the greater good. It is the site of character formation and life orientation. In short, the family is a profoundly relational institution and, since it places individuals within a context of obligation and responsibility, it embodies the essence of mutuality. The fact that many now celebrate its destruction as somehow part of the liberation of women only testifies to the destruction of the chance for a real feminist founded on what most women want - marriage and children alongside creative work and social engagement. (p. 91).

It's good to read of an influential voice in the world of politics saying something like that. I hope the Conservative Party will not altogether abandon its manifesto pledge to recognise the value of marriage in the tax system. The duty of the State is to encourage and reward good behaviour in its citizens and marriage-based family life is a solid basis for the good society.

According to Blond the policies of parties on both the right and left of the political spectrum have added to the problems facing the UK at this time. Thatcherism placed too much trust in the untrammelled power of the markets and gave rise to a highly individualistic consumer society. When elected in 1997, new Labour did little to challenge this state of affairs. The dominance of the City remained unchallenged and the gap between the richest and poorest in society grew ever wider. Added to this, in the Blair/Brown years central government became more powerful.  Public services were micro-managed through target setting. Countless CCTV cameras have been installed so that the Big Brother State can keep a watchful eye on its increasingly unruly citizens.

Blond lays much of the blame for the current malaise on what he calls "The illiberal legacy of liberalism". Liberalism denies the existence of objective truth and fosters moral and cultural relativism. In that context the duty of the state is not so much to promote that which is good and virtuous in society as to arbitrate on the rights of competing interest groups. The Christian basis of our national life has been eroded. Long held religious liberties have been compromised. Gays are accorded the right to adopt children, resulting in the closure of Christian adoption agencies.

Under the weight of sustained attack from moral relativism, instant self-gratification has replaced private virtue. ASBOS now have to do the job that was once a matter of decent neighbourliness. As David F. Wells reflected,

We live precariously on the knife-edge between chaos and control. What was once an open space between law and freedom, once governed by character and truth, is now deserted, so law must now do what character has abandoned. (Losing Our Virtue, IVP, 1998, p. 63)

Or as Blond puts it the illiberal legacy of  liberalism means that, "a supposed monopoly of power exercised by the sovereign individual is really...a mask for the monopolising authority of the sovereign state." (p. 156).

So much for "Broken Britain". How does Blond propose that we fix it?

He wants a restoration of moral ethos based on moral absolutes and public virtue. Blond challenges neo-liberal economics where amoral market forces rule, arguing for a more ethical approach where social justice is valued as well as profit. He suggests programmes for the creation of popular prosperity that will benefit the less well off. The writer also proposes a radical overhaul of public services. He wants public services to be freed from centralised controls and front line workers empowered to act as innovative stakeholders in the service they provide.

This is Blond's  'Red Toryism', "Red because it caters for the needs of the disadvantaged and believes in economic justice; Tory because it believes in virtue, tradition and the priority of the good." (p. 35). Blond has hopes that David Cameron with his talk of the 'Big Society' might well be a Red Tory too (maybe with a tinge of orange in deference to his coalition partners?). We'll have to see how much of the Guru's programme is actually implemented by the Lib-Cons.


Red Tory provides much food for thought for Christians reflecting on the world of politics in 21st century Britain. Any attempt to wed private virtue and personal responsibility to social justice is surely to be welcomed. But I wonder whether Blond's diagnosis of the problem facing 'Broken Britain' at this time is sufficiently radical. The moral and spiritual brokenness of our country is not simply the effect of liberalism or the misguided policies of left and right. It is due to man's sinful rebellion against God. As the apostle Paul surveyed the moral wasteland of 1st century Rome he saw a society that had abandoned God and was subject to his just wrath, Romans 1:18-32. The only hope for Rome was the gospel of salvation, Romans 1:16-17.

It is a fact of nation's history that the greatest periods of social reform have followed Christian revivals. William Wilberforce successfully campaigned against slavery abroad and a multitude of social evils at home in the wake of the Evangelical Revival of the 18th century, associated with George Whitefield and the Wesley brothers. The Tolpuddle Martyrs, early trade unionists, were Methodist Christians. Lord Shaftesbury's agitation for better working conditions for those who toiled away in the "dark satanic mills" of the Industrial Revolution was inspired by his Christian faith. Similarly with George Muller and his orphanages. In the 19th century Nonconformity exercised a powerful influence on the Liberal Party. This is not to say that we must wait for another revival before trying to change society for the better. At all times Christians have been called to be "salt and light",  bearing witness to and  living out  the good and wholesome standards of God's Word in public life. But I'm afraid that it will take more than Blond's proposals to fix 'Broken Britain'. God alone can do that, Psalm 85:4-7.
Posted by Guy Davies at 11:30 am