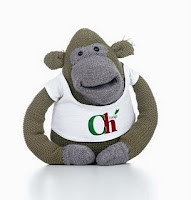 ﻿﻿﻿﻿﻿The Exiled Preacher's pet monkey, David Sky had found romance in the isles of the local Co-Op store. He lost his heart to Bathsheba Earth, a beautiful (at least to him) girl monkey. It seemed too good to be true, but thankfully, life is sometimes like that.

David was on the run from Taffia Don, Dai Corleone. But his thoughts were now so full of love and happiness that the obsessive terror that had once dominated his life, the fear of being caught by the Don's  henchmen had all but evaporated. He began to get careless. Sky stopped glancing behind him to see if he was being followed. He would boldly stride around street corners where once he had paused to see if anyone might be lurking in darkened shop doorways, waiting to nab him and drag him back to Corleone's lair.

But something happened to reawaken his old neuroses. He had arranged to meet Bathsheba at the Co-Op's fruit aisle, near the bananas one Wednesday afternoon at 4.30pm sharp. Eager to see his true love, he left home a little earlier than was necessary. But there was Bathsheba, waiting for him. As he got closer, David could see that she was speaking to someone on her mobile. She was so absorbed in the conversation that she didn't notice David approaching. On hearing his cheery voice greeting her, Bathsheba suddenly broke off the call, trying her best not to seem flustered. When he asked who she was speaking to, the girl monkey sounded evasive. She even seemed a little cross at his intrusiveness, an emotion he had not seen in her before.
David Sky wondered what it all could mean. Was she two-timing him perhaps? Or worse, could it really be that their assignations were part of an elaborate honey trap devised by Dai Corlene to ensnare him? These thoughts troubled the poor monkey's mind. He needed no Iago to stoke the towering flames of jealousy. But his jealous rage was as nothing when compared with the rampant paranoia that now engulfed his soul. Every customer he laid eyes on in the Co-Op, however innocent looking, was viewed a suspected Taffia Goodfella, ready and waiting to pounce.
Heartbroken and  terrified, David Sky turned from Bathsheba Earth and hurriedly made his way home. Perfect fear had cast out love. The monkey was last seen leaving the brightly lit shop and heading out into the gathering gloom of a damp winter's afternoon. Whether he will make it to the sanctuary of the Exiled Preacher's study has yet to be seen. There seems little hope of a happy ending to this story. But hope, no matter how slender and fragile, is better than the empty despair of having no hope at all.
Posted by Guy Davies at 8:00 am

I heard he'd got a call to a church in the USA...or am I completely mixing up what I'm reading on different peoples' blogs?

(It says something about me, I think, that I don't comment at all on Vanhoozer, theology and a host of others issues, and then chirp in as soon as a comedy monkey appears!)

David Sky tried to get a call to a big American church, but it didn't work out as they don't pay peanuts.

By the way, he still hasn't arrived home.

Where did you come up w/ the name for the female monkey?

David Sky is kind of my name back to front - Davies Guy. Bathsheba as in the woman who was king David's downfall. Earth as opposed to Sky.

You do know you've got him down as your pet MONEY? Wish I had some.