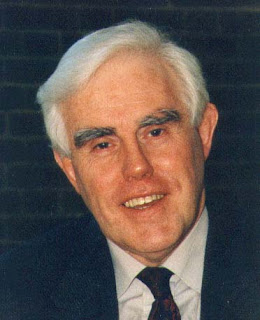 Yesterday morning Graham Harrison was called into the presence of the Lord whom he had served most faithfully. Even as we mourn his death, many people, myself included have reason to be grateful to God for the impact of his life and ministry. I was never a member of Emmanuel Evangelical Church, Newport where he ministered for over forty years, but I often attended the church and sat under his preaching. While he was never given to pulpit histrionics, his authoritative, pastorally sensitive and gospel-centred ministry never ceased to move me. His pattern was to preach a series of sermons on a Bible book on Sunday mornings and preach one-off evangelistic messages in the evenings. His evangelistic preaching was invariably fresh, punchy, and gripping.

One of the reasons why I opted to study at the London Theological Seminary (1988-90) was that Graham Harrison was one of the lecturers. He used to visit the seminary every other week during term time to teach Christian Doctrine, or Systematic Theology. His lectures were sound, clear and insightful, the product of wide and deep reading in the field of systematics. But he was ever the pastor-theologian and would give plenty of time for students to discuss the pastoral relevance of whatever subject he had been teaching. In discussion his intellect was sharp and his wit dry. 'Know it all' students were soon cut down to size.

Graham Harrison was a shy man and could sometimes seem a little forbidding to those who did not know him well. But this did not stop him from throwing himself in to the everyday work of pastoral ministry. He was no extrovert, but in his own way Mr. Harrison was a real people person and had a deep and abiding love for the flock at Emmanuel. This only really struck me when I did a couple of 'Summer Pastorates' at the church when the preacher was on Sabbatical. I would do a little pastoral visiting and elderly church members would speak warmly of their Minister, telling of his regular visits and the support he had given them during times of sorrow and trial. The powerful preacher and incisive lecturer was above all a local church pastor. That is what made him such a fine role model for budding Ministers of the Gospel.

Graham Harrison was a 'Lloyd-Jones man'. Not that he followed his teaching slavishly. He was a Baptist after all. But he was a big admirer of 'the Doctor'. We had him speak at Providence Baptist Church on 'Martyn Loyd-Jones 1966 & Today' back in 2006, the 40th anniversary of Lloyd-Jones' call for Evangelical Unity. Harrison shared Lloyd-Jones' great emphasis on the need for the empowering presence of the Spirit in the Church. While a student at the London Theological Seminary, I wrote a thesis on The Sealing of the Spirit under the guidance of Mr. Harrison. The comments he offered on my work were typical of the man,

May this subject not simply interest your mind but grip your soul and drive you increasingly to pray for its fulfilment in your own experience. Remember there is always more with God.

Just how much more, Graham Harrison is only beginning to realise now that he is absent from the body, but present with his Lord in glory. We thank God for the life and ministry of his servant and pray that Mr. Harrison's wife, daughter and her family will be comforted by the hope of the gospel at this time.
Posted by Guy Davies at 2:20 pm

Thanks for putting this together, Guy.

Guy I agreed whole heartedly with your tribute to Mr. Harrison.

Thank you for posting this. I remember hearing him for the first & only time 'live' at a Westminster Conference in 1985. His paper was "1735: Harbinger of Revival"
How I would love to have an audio version of that now!
I don't cry easily & lectures are not supposed to have that effect!
Wonderful, powerful, heartfelt stuff.
Come the Resurrection when all the saints awake, I will be glad to meet him properly.
Meanwhile...... thanks for this.