Grace in a Town Called Malice? 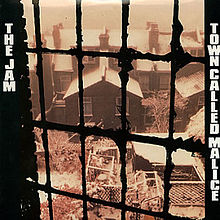 Well, Happy Birthday to Paul Weller, whose songs have been the soundtrack to my life. We've been to see him live several times. His gigs are often brought to a rapturous conclusion by the old Jam hit, Town Called Malice (Ooo, yeah). The 1982 song has a catchy Motown beat, but the lyrics offer a rather bleak depiction of Weller's childhood home town, Woking. Town Called Malice also provided a powerful social commentary for Thatcher's Britain. The song crossed my mind as I've been following the furore over Boris Johnson's top SPAD, Dominic Cummings's alleged breech of lockdown rules.

No, I'm not about to give you my (un)learned opinion on whether Mr Cummings and his wife acted illegally in relocating to Durham to be near his family to ensure their four year old son could be looked after as they both suffered from suspected coronavirus. Neither am I about to weigh in with my views on how this plays out politically. To me he gave a reasonable account of his actions in this afternoon's press conference. Watch it here and make your own mind up.

What I want to focus on is how people reacted to the story. News reports showed Cummings being mobbed by journalists and press photographers outside his home. The journos rather ironically demanding why he had defied government rules, while they bumped up against each other, in defiance of government rules on social distancing. A video clip showed Mr Cummings being barracked by his neighbours as he walked along the street. Much to the delight of some lefty journalists on Twitter. Social media at its tribal, self-righteous, virtue signalling worst.

Sleepy old CofE Bishops were roused to issue an urgent call for repentance in their Sunday sermons. Not to sinners in need of a Saviour, of course, but to the government, 'Repent and sack your chief SPAD' as Jesus didn't quite say. 'It's enough to make you stop believing... in a Town Called Malice, (Ooo, yeah).

The Cummings episode illustrates a wider point regarding how we've responded to the pandemic as a country. In some ways, the coronavirus outbreak seems to have brought out the best in us. Key workers have risen to the challenge of caring for the sick and keeping us safe. People are looking out for their shielding neighbours. Most are good humoured as we give each other a wide berth when passing on the street on in shopping aisles. Whatever the rights or wrongs of Cummings's actions, at least he had the welfare of his child at heart.

Some, however flout social distancing rules with a blatant disregard for other people, 'Covididots'. It has brought out the inner busybody in others. In late April it was reported that the police had received 200,000 calls from people snitching on their neighbours for petty misdemeanours. ‘Holier than thou’ social distancers  are quick to snap at anyone who inadvertently strays anywhere near them.

There is more than a touch of Pharisaism about the anti-Cummings brigade, spitting out their self-righteous venom on Twitter. Not to mention the bishops. Maybe the mitred hypocrites who fulminated against the SPAD-in-Chief have some repenting of their own to do now that they've had a chance to hear his side of the story? After all, doesn't the Good Book warn us, 'do not pronounce judgement before the time'? Try 1 Corinthians 4:5 for size.

Both the rule flouters and the busybodies tell us something about human nature. Some delight in breaking the rules, while others do their best to keep them and despise those who don’t. Grace teaches us a better way. Despite what many people might think, the Christian faith is not about trying to get right with God by keeping the rules. The New Testament insists again and again that salvation is not by the works of the law. Jesus came into the world to save sinners. He did that by dying on the cross for our sins. God forgives and accepts us when we trust in Jesus for salvation. As a well-known hymn puts it, ‘the vilest offender who truly believes/that moment from Jesus a pardon receives’. That’s grace.

The self-righteous who pride themselves in their moral superiority find grace offensive. Jesus’ greatest opponents were the Pharisees who ‘trusted in themselves that they were righteous and despised others’. Grace humbles our pride and shows that all are in need of forgiveness. That makes us not quite so quick to sit in judgement on other people. But does that mean we are free to live as we please with little thought for God’s law or the good of our neighbour? No. As Augustine put it, "The law was given that grace might be sought; and grace was given that the law might be fulfilled." And love is the fulfilling of the law, (Romans 13:10).

What's missing from our very own Town Called Malice is grace (Ooo, yeah).
Posted by Guy Davies at 8:41 pm