Dominion: The Making of the Western Mind by Tom Holland [mini review] 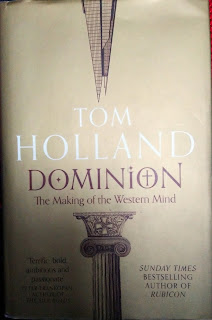 As a child the historian Tom Holland was fascinated by the ancient Romans and Greeks. Holland, who hails from Wiltshire, went on to author several bestselling books on Roman and Greek history, Rubicon, Persian Fire and Dynasty. But the more he got into the ancient world, the more morally repellent he found the ‘heroes’ of that age. It was said that Julius Caesar slaughtered a million Gauls and forced another million into slavery. Rather condemning Caesar as a genocidal war criminal, the citizens of Rome hailed him as a mighty leader whose exploits redounded to the glory of the Empire.

Holland became increasingly aware that his perspective on life was vastly different to that of the old Romans and Greeks. He realised that his idea of what’s right and wrong had been formed by a culture that had been deeply influenced by the Christian faith. In his most recent book Dominion: The Making of the Western Mind, Holland shows how our commonly accepted moral values were shaped by Christian teachings. We take it as self-evident that all people should be treated with dignity and respect. But that belief didn’t come from nowhere.

The Bible insists that all human beings are made in the image of God and are deserving of love and care from womb to tomb. The value of human life is underlined by the belief that in Jesus our Creator became one of us. He came to suffer and die on the cross that we might be forgiven and be put right with God. “It is the audacity of it”, writes Holland, “the audacity of finding in a twisted and defeated corpse the glory of the creator of the universe”.

We went to hear the author give a talk on Dominion towards the end of last year and I’ve just finished reading the book. It’s a brilliantly written account of the impact of the Christian faith on Western culture and values, covering everything from the Bible to The Beatles, Monasteries to #MeToo. Holland is not a personal believer in Jesus Christ. He calls himself a ‘cultural Christian’. But he recognises that the ‘molten heart’ of the Christian revolution is the cross of Jesus. The message of the cross turned the world upside down, exalting the lowly and humbling the mighty.

For the Romans, crucifixion was a symbol of brute power, ‘this is what you get if you mess with us’.  Since Jesus the cross has an altogether different message, ‘God shows his love for us in that while we were still sinners, Christ died for us.’ The love of God that streams from the cross changed the course of history and is still transforming lives today.