Ernest Kevan is best known as the founding principal of London Bible College, or London School of Theology as it is now called. He was also the author of a significant work on the Puritan theology of the law, entitled, The Grace of Law. Beyond those two facts, I don’t suppose many readers will know much about the subject of this first-rate biography. I certainly didn’t. Paul Brown has done the Christian world a service in rescuing Ernest Kevan from a measure of undeserved obscurity. The author studied at the London Bible College under Kevan.

Brown delves into his family history and charts the spiritual influences that by God’s grace helped to make him the man he was. Before becoming principal of London Bible College, Kevan was a Strict Baptist pastor. The Lord’s blessing was evident in the churches where he preached. Kevan was keen to engage the communities that surrounded the churches he served, offering practical help to those in need as well as proclaiming the gospel. Although he and his wife, Jennie were not blessed with children, Ernest head a great heart for little ones and his children’s talks were legendary for their clarity and winsomeness.

Kevan was an important figure in the resurgence of Evangelical and Reformed Christianity in the post-war period. What Martyn Lloyd-Jones was doing in his Westminster Chapel pulpit, Kevan was doing from his London Bible College lectern. Both men exposed a new generation to the riches of Puritan and Reformed theology. That’s not to say that Kevan and Lloyd-Jones always agreed. The former was more comfortable working with the theologically mixed denominations that the latter. Lloyd-Jones was critical of London Bible College offering the London University approved BD degree. The Westminster Chapel preacher would have nothing to do with the Billy Graham Crusades of the 1950’s. Despite Kevan’s misgivings concerning the Evangelist’s appeals for people to come forward and make a profession of faith, he penned some useful booklets that helped to ground new converts in the faith. While the ‘Doctor’ declined invitations to speak at the Keswick Conference due to its adherence to a faulty doctrine of sanctification, Kevan spoke there on a number of occasions. His addresses on Romans encouraged the conference to move away from its traditional ‘Higher Life’ teachings. It is interesting to ponder whether Kevan's "in it to win it" or Lloyd-Jones' "They shall turn to you, but you shall not turn to them." approach proved more effective.

At Kevan’s memorial service John Stott remarked on his ‘strength and gentleness’, two qualities that are not always found in the same person. Kevan was a scholar with a pastor’s heart, the best kind of man to lead a Bible College. At a time when Evangelical scholarship was virtually regarded as a contradiction in terms he showed that it is possible to be theologically conservative and intellectually rigorous. He was indeed a key leader in twentieth century British Evangelicalism. He bold, yet gracious witness to the truth should not be forgotten.

The Affinity Theological Studies Conference is due to take place on 16-18 January 2013. I attended the last one on 'The Doctrine and Function of Scripture in the 21st Century' back in 2011 (see here). During our discussions it emerged that more work needed to be done on biblical ethics in the contemporary context, hence the theme of next year's event. It is a proper conference, rather than a preaching-fest. Papers are circulated beforehand (I've already received my copies) and there are opportunities for discussion in small groups, plus plenary sessions. Here's the low-down:
Paper 1: Natural Law in Scripture
Exploring multi-faceted aspects of natural law in the Bible
Stephen ClarkDirector of EMW Theological Training Course and part time Lecturer at London Theological Seminary.

Paper 2: The teaching of Jesus & the NT
Exploring themes of continuity and discontinuity between aspects of ethical teaching in the ancient world and NT
Joshua Hordern
University Lecturer in Christian Ethics, University of Oxford

What love is this?

The Gospel According to Matthew

God with us was forsaken by God for us.

Christmas and the Trinity

If it is true that all three divine persons are involved any act of God, then the incarnation of the Son involved the whole Trinity. That does not mean that the Father and the Holy Spirit as well as the Son became incarnate. It was fitting that the Son as the image of the invisible God became man, created in the image of God according to his human nature.

But the Son did not become incarnate apart from the Father and the Holy Spirit. The Father sent the Son into the world as man and sustained, taught, guided and empowered him by the presence of the Holy Spirit. The purpose of the incarnation was that Christ might redeem us from sin by offering himself without blemish to God through the eternal Spirit. The Father raised his Son from the dead by the Spirit of holiness and by that same Spirit exalted Christ to his right hand in glory. The glorified Jesus poured out the Spirit from the Father upon the church on  the Day of Pentecost.

Through the Son the godhead bears the impress of Jesus' human experience of humiliation, sorrow and death. Our triune Lord remembers our frame, knowing that we are dust. The Holy Spirit as the Spirit of Christ, who groaned under the burden of our fallen world, makes intercession for us with groanings that cannot be uttered.  The Father of the suffering Son's ear is ever attentive to the cries of his children. His tender hand will wipe all tears from their eyes.

Believers will share in the glory and exaltation of the incarnate Son. He, as the life-giving Spirit will raise them from the dead, transform them into his image and welcome them into his Father's house. There they will dwell with the Triune God for ever. Christmas is the gift of the Trinity.
Posted by Guy Davies at 3:17 pm 1 comment:

A brace of theological journals

You wait for ages for a decent online theological journal and then two turn up. The Gospel Coalition's  excellent Themelios and Affinity's baptism-themed Foundations are out now.

We sang the hymn "Thou art worthy" the other week. The first verse is by Pauline Michael Mills, with a second verse added by Tom Smail. I was thinking that with a third verse on the Holy Spirit, it would make a good Trinitarian piece. Here's my attempt in modernised English.

You are worthy, You are worthy,
You are worthy, O Dove,
You are worthy to receive glory,
the Spirit of Christ and of God.
For You have renewed us, have
sanctified and sealed us,
by Your power making us whole.
And You will raise us
as You raised Jesus
to sit at the Father’s right hand.
Posted by Guy Davies at 3:12 pm No comments:


I know, the very title of my article might be enough to make you groan. What’s joyful about Christmas shopping on a busy Saturday afternoon, or writing a seemingly endless pile of Christmas cards? Even the grand switch on of Westbury’s Christmas Lights had to be postponed due to bad weather. Grim.

‘I wish it could be Christmas every day’ hollers the familiar seasonal song. Er, no thanks. Yes, there are good things too, like spending time with friends and family, giving and receiving gifts and a slap-up Christmas dinner. But the ‘season to be jolly’ soon passes.

We can recover the joy of Christmas when we remember the One who’s birth is celebrated on 25th December. The birth of Jesus Christ was a joyful event. The angel of the Lord told those old shepherds who watched their flocks by night,

“Do not be afraid, for behold, I bring you good tidings of great joy which will be to all people. For there is born to you this day in the city of David a Saviour, who is Christ the Lord.” (Luke 2:11-12).

Jesus came to banish the misery of sin and death and give us the joy of salvation. This joy is not seasonal, or based on a passing mood. It is the lasting joy of sins forgiven through faith in Christ the Lord and the glad hope of everlasting life. You will be familiar with the car window sticker saying, ‘A dog is for life, not just for Christmas’. Well, with Jesus, joy is for life, because of Christmas. We have ‘good tidings of great joy for all people’ - including you.

* From an article in White Horse News.
Posted by Guy Davies at 8:00 am No comments:

Unexpected Jesus: The Gospel as Surprise, by Craig Hovey 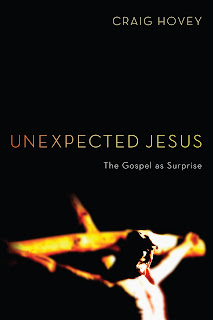 There is surprise which is nice, there is shock, which is not and then there is a bit baffled, which is neither one thing or the other. I was prepared to give this book a fair reading. The title has a nice ring to it and the author has some thought provoking things to say, but in the end I was left a feeling bit baffled.

On the plus side Hovey emphasises that because Jesus is the risen and living Lord, we can never wholly  posses him or think that we have come to know all that there is to know all about him. The living Jesus always has the capacity to surprise and amaze his followers.

Now for the baffled bit. For starters, the death of Hovey's 'Unexpected Jesus' was not an act of penal substitutionary atonement. His love for his enemies who crucified him exceeded their hatred for him. Only in that sense says the author, was the Cross good news. It is not that Christ saved us from our sins by dying in our place. Hovey cites Robert Jenson, "The Crucifixion is God's salvific action just in that God overcomes it by Resurrection." While it is true that we are saved by the living Jesus, it was by his death that he paid the price of sin so that we might be forgiven and put right with God. The lack of a rigorous theology of the Cross is a serious shortcoming in this work.

The writer's construal of the day of judgement is not what might be expected if we take the witness of Scripture seriously. Hovey points out that the Father has committed all judgement to the Son (John 5:22). He reasons that "God's word of judgement is none other than Christ." (p. 117). He asks, "Can the lover of enemies be the same who oversees their final destruction?" (p. 116). Yes, because judgement on Christ's part is not an act of hatred, but justice, Matthew 25:46, John 5:28-29, 2 Corinthians 5:10.  Hovey holds out the hope that Jesus will judge in favour of those who have expressed antipathy to the Christian faith, on account of their concern for the poor and needy of the world. But while caring for the downtrodden is commendable, it is by faith we are saved, by grace and not by our works, Ephesians 2:8-9.

As I say, there are some good things here, but Hovey's attempt at sketching out a 'theology of surprise' doesn't altogether stand up to serious biblical scrutiny. Sad to say that the issues mentioned above explain why bafflement rather than surprise was the overriding emotion evoked by my reading of Unexpected Jesus: The Gospel as Surprise.

* Thanks to the publisher for a complimentary review copy of this book.
Posted by Guy Davies at 5:09 pm No comments: