The Mosaic Covenant: a covenant of works? 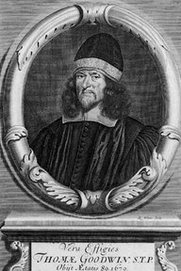 "This covenant [of grace] is revealed in the gospel; first of all to Adam in the promise of salvation by the seed of the woman, and afterwards by farther steps, until the full discovery thereof was completed in the New Testament" (Second London Baptist Confession of Faith, 1689, chapter 7:3)

Samuel Renihan (@Petty_France) recently tweeted a ten point summary of Thomas Goodwin's view of the Mosaic Covenant. I've reproduced the list below. Goodwin's stance bears more than a passing resemblance to that of his fellow Independent and good friend, John Owen. Owen's understanding of the Mosaic Covenant was highly influential in Particular Baptist circles. Renihan has dealt with this at length in his excellent, From Shadow to Substance: The Federal Theology of the English Particular Baptists (1642-1704), Regent's Park College, 2018. In essence Goodwin, Owen and many Particular Baptists held that the Mosaic Covenant was a covenant of works that was subservient to the covenant of grace. This line of thought is certainly compatible with the Second London Baptist Confession, but it is not explicitly taught in that document.

The Mosaic Covenant was a further elaboration of the Abrahamic Covenant especially formulated for Israel's life in the Promised Land, Exodus 3:1-8. The law was given to Israel as God's redeemed people, Exodus 20:1-2. It was as such that Israel entered into a solemn covenant with the Lord and promised to obey him, Exodus 24:3. The covenant was ratified by the shedding of blood without which there is no forgiveness of sins, Exodus 24:6-8, Hebrews 9:18-22.

Should Israel renege on their covenant obligations they were threatened with exile from the Promised Land (Deuteronomy 28). But that does not make the Sinai Covenant a covenant of works. Unlike with Adam, there was a way back for Israel from the dark paths of sin, Leviticus 26:40-45.

But neither does this mean that the old covenant was an administration of the covenant of grace, as taught in the Westminster Confession of Faith (Chapter VII:V). It was not. For one, the covenant of grace is with Christ and his elect people. The old covenant was with Abraham and his descendants, but 'not all who are descended from Israel belong to Israel' (Romans 9:6). Among the people of Israel only a remnant were chosen by grace for salvation through the coming Messiah, Romans 11:5). The Abrahamic, Mosaic and Davidic covenants were 'covenants of promise' (Ephesians 2:12) wherein the covenant of grace was revealed, "until the full discovery thereof was completed in the New Testament".

With those thoughts in mind I will offer a brief comment on each of Goodwin's points on the Mosaic Covenant as summarised by Renihan.

2. It was based on a redemption other than Christ's - yes, the exodus, which typified Christ's redemption, Colossians 1:12-14.

3. It had a Mediator other than Christ - yes, Moses, who foreshadowed the work of Christ as mediator of the new covenant, Hebrews 3:1-6.

4. It offered a sanctification other than Christ's - 'I am the Lord who sanctifies you' (Leviticus 20:8). Israel was set apart as God's holy nation by virtue of the Lord's electing love and redeeming power. Israel's holiness was to manifest itself as the nation was devoted to God in obedience to his commands. These commands included ceremonial rules such as the food laws of Leviticus 11 and regulations concerning bodily discharges in Leviticus 15. But Israel was also called to pursue an inward holiness that was only possible by the work of the Spirit, Psalm 24:3-6, Ezekiel 36:25-28. Israel's role as a 'holy nation' to the Lord was a shadowy picture of the sanctifying work of Christ by the Spirit under the new covenant, 1 Peter 1:1-2, 14-19, 2:9-10.

5. It gave a justification other than Christ's. What does this even mean? Under the Abrahamic and Mosaic covenants justification was by faith in the promised Christ, Gen 15:6 (Romans 4:1-5), Psalm 32 (Romans 4:6-7). The Law and the Prophets of the old covenant bore witness to the righteousness of God apart from the law by faith in Christ, Romans 3:21-22.

6. It promised an earthly life and inheritance. Yes, which was typical of the eternal inheritance of the saints, 1 Peter 1:3-5.

7. Unregenerate Jews could keep the covenant. No, to do that their hearts needed to be circumcised,  Deuteronomy 10:12-16, 30:6. That was only the case for a godly remnant, which was why Israel as a whole broke the covenant and was exiled from the land. The unregenerate could not live up to the law's demands and stood condemned for their disobedience (Romans 8:3a, Galatians 3:10-11). By way of contrast the new covenant was 'not of the letter, but of the Spirit. For the letter kills, but the Spirit gives life.' (2 Corinthians 3:6).

9. It was subservient to the covenant of grace. Yes. Its function was to prepare the way for Christ and then get out of the way once the mediator of a new and better covenant had come, Galatians 3:23-25, Hebrews 8:13.

Children of Abraham: A reformed baptist view of the covenants, by David Kingdon 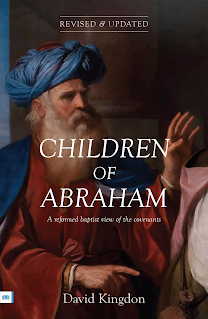 Grace Publications, 2021 edition, 256pp
Christmas Evans the Welsh Baptist preacher began his Christian life as a believer in infant baptism. He was outraged when he came across Baptists who contradicted his views. Evans set out to prove them wrong by reading the Bible from cover to cover and making a careful note of all the many references to the baptism of babies he discovered in holy writ. To his great disappointment he found none. Evans became a Baptist. The strength of the peadobaptist position, however, is not in its advocates' ability to produce killer proof texts in support of their position. Which is just as well. The case for infant baptism, rather, rests on elaborate biblical-theological arguments. Essentially it's all about the relationship between the old and new covenants, which is where David Kingdon rightly concentrates his considerable firepower.
Paedobaptists hold that there is one overarching covenant of grace that is administered in different ways in the various biblical covenants. Under the old covenant, covenant membership was for Abraham and his offspring. Following on from that, paedobaptists contend that children of believers are also children of the covenant and should therefore be baptised. That is exactly the point that Kingdon sets out to dispute.
Reformed Baptists certainly agree that there is one overarching covenant of grace. That covenant was first announced in the promise of Genesis 3:15 and was revealed with increasing clarity and fulness in the Abrahamic, Mosaic and Davidic covenants. They were not, however, administrations of the covenant of grace, the author argues. They were 'covenants of promise' (Ephesians 2:12). The covenants that God made with his people in the Old Testament period were earthly types and shadows of the blessings that would be granted under the new covenant.
People were saved during the Old Testament period through faith in the promise of grace effected by Christ in the new covenant. In that sense the Saviour's death retrospectively atoned for the sins of old covenant believers, Romans 3:25-26, Hebrews 9:15. It was on that basis that 'Abraham believed God and it was accounted to him for righteousness' (Romans 4:3, citing Genesis 15:6).
While it was true that all of Abraham's descendants were to be circumcised, not all of his offspring believed in the promise of salvation through Abraham's offspring, the Messiah. The Lord gave the Promised Land to the people of Israel, but not every inhabitant of the Land looked beyond it to the eternal inheritance of the new creation. In fact, it seems that only a remnant in Israel experienced the circumcision of their hearts to which circumcision in their flesh was but a sign, Deuteronomy 30:6, Romans 2:29).
It is with that in mind that Paul could say, 'not all who are descended from Israel are Israel' (Romans 9:6). Belonging to God's covenant people by natural descent from Abraham was part and parcel of the earthly and temporary character of the the old covenant. That has now become obsolete since the Messianic offspring of Abraham has come, Galatians 3:16. Membership of the new covenant people of God is on the basis of 'believe and belong' whether Jew or Gentile, not natural descent (Galatians 3:29, 6:15-16). That is why baptism is only for those who have repented of their sins and believed in Jesus, for they alone are in Christ, Galatians 3:27.
The old covenant distinction between outward membership of the people of God by descent from Abraham plus circumcision, and inward membership by circumcision of the heart and faith in the coming Messiah has been rendered null and void under the new covenant. In Jeremiah's promise of the new covenant (Jeremiah 31:31-34) all new covenant members of the people of God know the Lord, all have the law written on their hearts and all have their sins forgiven. Those things were only true for a godly remnant in Old Testament Israel.
John the Baptist recognised the 'believing remnant' principle. The Baptist warned that Jewish people should not rest in the fact that they were descended from Abraham and circumcised, Matthew 3:9. He did not baptise the children of baptised adults, only repentant sinners who were waiting for Messiah to be revealed, Matthew 3:10-11. Christian baptism similarly is upon repentance and faith in accordance with the consistent witness of the New Testament, Acts 2:38-40, 8:36-38, 9:17-18, 10:44-48 etc. Church membership is for those who have made a credible profession of faith and have been baptised, Acts 2:41.
David Kingdon originally published this work in 1973. This edition includes fresh maternal on the ministry of John the Baptist and the newness of the new covenant. Kingdon argues his case well, interacting throughout with representatives of the infant baptist tradition. In line with the Independent divine, John Owen, some Reformed Baptists have held that the old covenant was a republication of the covenant of works. Here Kingdon rightly lays stress on Paul's teaching that God's covenants with Israel were 'covenants of promise' that bore earthly and temporary witness to the spiritual and eternal blessings of the new covenant that are ours in Christ.
Convinced paedobaptists will find much to chew on in his book as the writer calls into question some of their most cherished assumptions and points out weaknesses in their key arguments. Baptists will be helped to see that our position is rooted in sound theological reasoning as well as the plain teaching of the New Testament. As the author convincingly demonstrates, baptism is only for those who have repented of their sin and believed in Jesus Christ for salvation. Grace Publications are to be congratulated for publishing this revised and updated edition of Children of Abraham.
Posted by Guy Davies at 8:00 am No comments: