Who’s in charge of this Covid-stricken world? 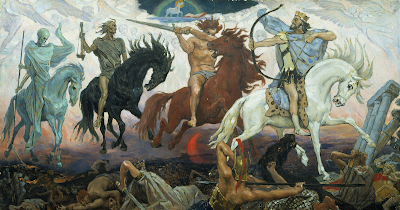 I don’t know about you, but I’m becoming weary of doom-laden Covid Press Conferences. The other week the Chief Scientific Advisor, Sir Patrick Vallance and the Chief Medical Officer, Professor Chris Whitty teamed up for a rather sombre double act. With the use of various slides they set out the prospect of a second spike in Coronavirus infections over the autumn/winter period. The following day a newspaper cartoon pictured the event. Vallance is shown saying, “If we look at the next slide...”. A frightening image is summoned of the Four Horsemen of the Apocalypse wreaking havoc.

The hoofbeats of these Four Horsemen can be heard thundering throughout human history. They certainly seem to be on the move at the moment. Yet they are not pictured in the Bible to drive us to despair. Our political leaders may be struggling to get to grips with the pandemic, but that does not mean the world is running out of control. In Revelation chapters 4 & 5 the apostle John is given a vision of God’s throne room in heaven. He sees God place the responsibility for fulfilling his purposes into the hands of a Lamb who was slain and is now alive. This ‘Lamb’ is an image of Jesus.

The most basic confession of the Christian faith is, ‘Jesus Christ is Lord’. The throne room of the universe is not empty. He who shared our weakness in becoming man and dying for our sins has been exalted to God’s right hand in glory. The forces of death and destruction will not be allowed to prevail. There will be a new heavens and a new earth where ‘death shall be no more’. The believer is able to look to the future with hope because the Lamb is in the midst of the throne.

Posted by Guy Davies at 4:00 pm No comments:

The Mystery of Christ: His Covenant & His Kingdom by Samuel Renihan (review part 2) 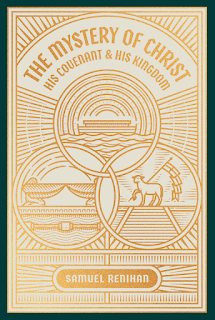 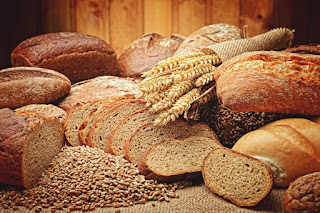 Imagine living in a country where you venture to the local supermarket, only to find the shelves empty of products you wanted to buy. No carrots, or fresh meat, no bread or milk, no hand sanitiser or soap, and above all, no toilet paper. Well, you don’t need too vivid an imagination to envisage what that might be like. Just the ability to remember how things were in the UK back in March and April of this year.

The shortages weren’t the result of disastrous crop failures, or the collapse of supply chains. It was panic buying. Some people shoved more fresh produce into their shopping trolleys than they could possibly eat, with the result that mounds of fruit and vegetables were binned. What a waste. You will probably remember the video posted online by a tearful nurse asking people to ‘just stop’ their panicked purchasing. After a busy hospital shift she was unable to get hold of the basic goods she needed for her family.

Things are better now, thankfully, but what happened back in the spring gave us a glimpse into what life is like in some countries when famine or disaster strikes. It was a reminder not to take a plentiful supply of everyday produce for granted. Harvest Time give us an opportunity to pause and give thanks to God, the ‘giver of every good and perfect gift’.

He not only gives us food and drink, but satisfies the deepest needs of our souls. Jesus warns us of the danger of seeking satisfaction merely on a material level, “Do not labour for the food that perishes, but for the food that endures to eternal life, which the Son of Man will give to you.” Our hearts will only be satisfied in knowing God through Jesus. That is why he came into the world to die for our sins and be raised to life. As he said, “I am the bread of life; whoever comes to me shall not hunger, and whoever believes in me shall never thirst.”

See our Providence & Ebenezer website for info on attending our Harvest Services.

Posted by Guy Davies at 3:43 pm No comments: