A Biblical Case for Natural Law by David Van Drunen 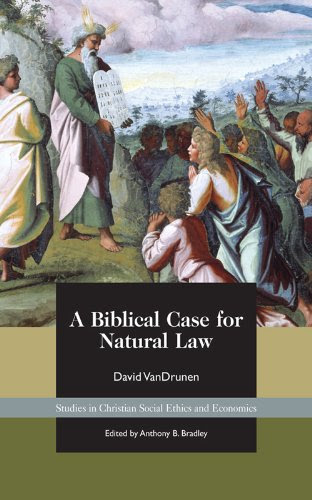 I very much appreciated the author's Living in God's Two Kingdoms, and thought I'd have quick look at this brief monograph on natural law. In the work just referenced Van Drunen makes the point that in the 'common kingdom' the believer lives and works alongside the non-believer, both being subject to the same ethical rules. A Christian plumber is as obliged to fit a central heating system that is safe, economical and does not leak as his non-Christian colleague. That's fine when it comes to plumbing and the likes, but to what shared moral code may believer and non-believer appeal when it comes to ethical concerns more generally? According to Van Drunen, that's where natural law comes into its own.

He makes the case that natural law is the revelation of the righteousness of God to and in his human image bearers. Even fallen human beings have a sense of right and wrong. Paul condemns certain sins as 'against nature' and charges sinners with willful rebellion against what they know to be right, Romans 1:18, 19, 26, 27, 32. See also Romans 2:14-15, which Van Drunen takes as evidence that although Gentiles could not be judged for breaking the Ten Commandments, of which they had not heard, they would nevertheless be judged according to the standards of natural law to which their consciences bore witness.

After devoting a chapter to Natural Law and the Two Kingdoms Doctrine, Van Drunen discusses how natural law applies in the Civil Kingdom and the Spiritual Kingdom. He discerns three main elements of natural law in Scripture that apply to all people in the civil realm regardless of their faith position, 'things that should not be done', the 'fear of God' (see Genesis 20),  and 'a common humanity' (see Job 31:13-15, Amos 1).

As far as the spiritual kingdom is concerned, the writer argues that as the redemption involves the renewal of the image of God, a key component in natural law, that the "present, earthly existence of the spiritual kingdom cannot be at odds with that good creation and its natural law; it far transcends them." (VanDrunen, David (2012-03-20). A Biblical Case for Natural Law (Kindle Locations 858-859). Acton Institute. Kindle Edition). Scripture does not set aside natural law in the ethical life of the spiritual kingdom. Old Testament wisdom literature incorporates the insights  of non-Israelite proverbial sayings. Paul's 'household codes' in Ephesians 5-6 and Colossians 3-4 reflect Greco-Roman cultural norms, even as he frames his teaching in a distinctively Christian way. He wanted Christians to be mindful of the moral expectations of their non-Christian neighbours, see 1 Thessalonians 4:12, 1 Timothy 3:7 for example. And so Van Drunen concludes,

As long as the church is a pilgrim in the present age, believers must conduct themselves in the church and in the world according to the nature of things and with critical yet appreciative appropriation of the world’s cultural achievements. (VanDrunen, David (2012-03-20). A Biblical Case for Natural Law (Kindle Locations 1001-1003). Acton Institute. Kindle Edition).

It would be difficult to gainsay the basis thesis of this monograph, namely that natural law has biblical sanction and that it has applications both in the civil and spiritual realms. I also agree with the writer's 'two kingdoms' stance. But reading reading this work raised a number of questions for me:

It's no doubt a bit much to expect the writer to address these questions in a brief monograph, but I'd be interested in what he had to say by way of response. Maybe I need to read his larger work, Natural Law and the Two Kingdoms: A Study in the Development of Reformed Social Thought? Of the making of many books there is no end...
Posted by Guy Davies at 11:57 am No comments:

When the Word was made flesh

The eternal One entered time
The invisible One appeared

The unchanging One became transient The title is borrowed from the seasonal song, ‘We wish you a merry Christmas’, which kind of begins OK and then degenerates into a repeated demand for ‘figgy pudding’. Whatever that is. The ditty promises, ‘Good tidings we bring to you and your kin’. But doesn’t spell out what those ‘good tidings’ are. That’s when then the demanding ‘figgy pudding’ with menaces bit comes in. ‘Random’, as teenagers might say.

And we could have done with some good news with all the bad stuff that’s hitting the headlines these days, but there we are.

When the angel of the Lord was sent to announce the birth of Jesus Christ to some unsuspecting shepherds he was a little bit more forthcoming with regard to ‘good tidings’ saying, “Fear not, for behold, I bring you good news of great joy that will be for all the people. For unto you is born this day in the city of David a Saviour, who is Christ the Lord.” (Luke 2:10-11).

Now that is good news. The long-expected Messiah has been born. He is described as a “Saviour”. His very name, Jesus means, “the Lord saves”. He came into the world to bring us forgiveness and peace with God through his death on the cross. By his resurrection power those who believe in him have the hope of everlasting life.

Email ThisBlogThis!Share to TwitterShare to FacebookShare to Pinterest
Labels: Christmas

Next February 25-27 the conference will be considering the theme of 'Union with Christ' with the help of papers provided in advance by Cor Bennema, Tim Ward, Bob Letham, John Fesko, David McKay and Paul Wells.

The format of the conference is considered to be unique by many people who attend. Carl Trueman said of the 2011 event that it was 'probably the most helpful' conference he had ever attended: 'The structure was great: speakers sent papers in advance; they introduced them briefly at the conference; the conference then broke into small groups for discussion; and then reconvened for plenary debate. True conversational theology... the discussion groups, consisting of academics and pastors, pushed everything to its implications for the local church... differences were respected but not relativised; and good humour and thoughtfulness characterised everything.'
I'd second Carl's words of commendation. If theological study and discussion is your thing, then check it out here.
Posted by Guy Davies at 9:19 pm No comments: 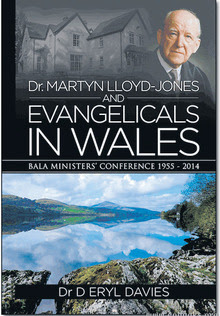 Dr. Martyn Lloyd-Jones' influence on Evangelicalism in Wales did not wane when he moved from the Land of His Fathers to become Minister of Westminster Chapel in London in the 1930’s. In some ways his impact on Evangelicalism in Wales grew during the years of his London-based ministry. A new generation of young men converted in the 1940’s and called to pastor churches in the theologically mixed denominations looked to him for spiritual inspiration, theological guidance, personal advice and leadership.

Some of those men organised an annual Ministers’ Conference in the mid 1950’s that nowadays meets each June in the beautiful setting of Bala, north Wales. From its beginnings until he last attended the conference in 1978 Lloyd-Jones had a huge impact on the gathering. He chaired the discussion sessions and often gave the closing conference address. The ethos of Bala Ministers’ Conference was very much shaped by Lloyd-Jones, with its strong emphasis on prayer, preaching and revival.

The period in which Lloyd-Jones attended conference was one of great change for Evangelicalism in Wales. Many ministers faced the issue of secession from the mixed denominations. The challenges thrown up by the ecumenical movement forced them to go back to first principles and ask, ‘What is a Christian?’ and ‘What is the Church?’ The burgeoning Charismatic scene prompted reflection on what is and what is not a genuine work of the Spirit.

Attending the conference as a younger Minister in the early 1990’s it seemed to me that the answer to almost every problem raised for discussion was, ‘we need a revival’. Discussions were often brought to a juddering halt when an old timer quoted something that ‘the Doctor’ had said some years earlier as if he was an infallible oracle. However, as Davies points out Lloyd-Jones would have deplored such a tendency and always encouraged men to think for themselves. While he believed in revival, he was also very much an evangelist and spoke of the need to be active in the Lord’s service in season and out of season.

The conference today seeks to maintain its focus on preaching the word in the power of the Spirit, while endeavouring to equip men to minister effectively and fruitfully in the contemporary setting. If it wasn't for my dislike of the dormitory sleeping arrangements, or, more accurately, the not sleeping because of other Ministers' snoring arrangements, I'd probably attend more frequently myself.

Eryl Davies tells the story Lloyd-Jones and the Bala Ministers’ Conference with gripping simplicity. The bite-sized chapters make for easy reading and a fast-paced narrative. The author is not unaware of criticisms of the man and the conference and seeks to respond to them honestly and graciously. The final two chapters attempt to sketch out a theology of Word and Spirit in preaching. A number of appendices include notes on Lloyd-Jones’ addresses at Bala. His stirring emphasis on our need to see the living God at work among his people deserves to be heard afresh today.

* Reviewed for Evangelical Times
Posted by Guy Davies at 8:39 am No comments: