The History of Christianity in Britain and Ireland: From the first century to the twenty-first, by Gerald Bray 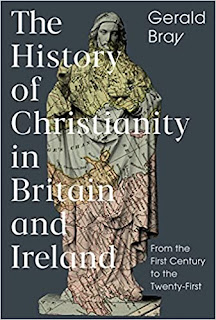 IVP, 2021, 693pp
This looked like the book for me. The history of Christianity in these islands is a fascinating story. I've enjoyed some of the author's earlier writings Creeds, Counsels and Christ (Mentor) and The Doctrine of God (IVP). But I didn't get on with this title as well as anticipated. Bray writes very much from an Anglican perspective. His focus tends to revolve around the institutional church. Tables are given on how dioceses in England and Ireland developed over the centuries. Controversies in relation to the Established Church are discussed in some detail. The account can sometimes be a little dry and lacking in human interest, which is a pity as the Christianity in Britain and Ireland has produced some great characters.
Plus, while billed as covering Britain and Ireland, England pretty much dominates, with occasional side glances at Scotland, Wales and Ireland. Even periods when a lot was going on in Wales like the Evangelical Revival in the 18th century and the other revivals that followed, little coverage is given here. The 20th century Welsh preacher D. Martyn Lloyd-Jones gets a mention, though. He is made to sound even more Welshy by the author referring to him as Dafydd rather than David Martyn. Inaccurately he is said to have called for Evangelicals to leave their denominations and join the FIEC (Fellowship of Independent Evangelical Churches), where in reality it was the BEC (British Evangelical Council).
Not much is said about the impact of British Christianity on world mission. William Carey's pioneer work in India isn't mentioned, for instance. Were Baptists even a thing? Of course, in a work of this scale the writer will have to be highly selective, but a less Anglo-centric and Anglican-centric account would have made for a more rounded history.
Gripes aside, there a good things here too. The shadowy origins of British and Irish Christianity are charted with care. The Medieval period isn't written off as a 'Dark Age' altogether devoid of gospel light. Take a bow, Anselm. Periods of Reformation and Revival and some of the key figures connected with them are given due attention. For an avowed Anglican Bray is highly sympathetic towards the Puritans and has little time for Charles I.
The author's sweeping overview of the history of Christianity in these islands concludes with him charting the rapid decline in church attendance and influence in recent decades. The roots of decline are traced to factors in the Victorian era, where many people had a 'form of godliness', but knew little of its power. Bray makes it clear that where churches are growing in this secular age they tend to be biblically faithful, gospel preaching fellowships. Church groupings that have changed their beliefs to fit in with the times are on their way out. Maybe there was something to be said for Lloyd-Jones's 1966 call for Evangelicals to leave the doctrinally compromised denominations and come together to reach the nation for Christ?
For now the church in Britain and Ireland finds itself 'singing the Lord's song in a strange land' as marginalised exiles. We must fight the good fight of faith and pray that our God will once more pour out his Spirit upon us in reviving power.
Posted by Guy Davies at 2:45 pm No comments:

The Restless Republic: Britain Without a Crown 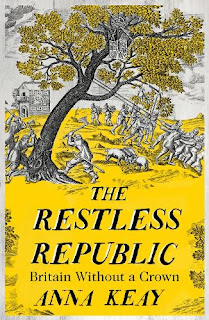 The King of Love

Over an elongated Bank Holiday weekend a grateful nation paused to mark the Platinum Jubilee of Queen Elizabeth II. I well remember the Queen’s Silver Jubilee celebrations way back in 1977. We had street parties, people merrily waved Union Jack flags and wore red, white and blue plastic hats. Much fun was had by all. Little did we think when we sang, ‘Long live our gracious Queen’, that Her Majesty would live to see her 96th birthday and reign over us for 70 years (so far).

The Queen’s reign has been so long that she seems like a living embodiment of modern British history. She has seen 14 inhabitants of 10 Downing Street, from Winston Churchill to Boris Johnson. Even the oldest of us has lived most of our lives under her rule. We don’t like to think that one day Her Majesty’s reign will end, but end it will. Prince Charles sitting in for the Monarch at the recent State Opening of Parliament  was a little glimpse of what’s to come. His time on the throne is bound to be short lived compared to that of his mother.

The Queen makes no secret of the fact that her dedicated service to the nation is inspired by her faith in a King far greater than even her royal personage. That King is Jesus. The Bible styles him, ‘King of kings and Lord of lords’. Death will not deprive him of his crown. In fact, it was by dying on the cross for our sins and being raised from the dead that he was enthroned as the world’s true Lord and King. His kingdom of love will never end.

In her message to the Commonwealth in 2011, Her Majesty the Queen, said: “Although we are capable of great acts of kindness, history teaches us that we sometimes need saving from ourselves – from our recklessness or our greed. God sent into the world a unique person – neither a philosopher nor a general, important though they are, but a Saviour, with the power to forgive. Forgiveness lies at the heart of the Christian faith. It can heal broken families, it can restore friendships and it can reconcile divided communities. It is in forgiveness that we feel the power of God’s love.”

* For the June edition of various local parish magazines

Posted by Guy Davies at 2:35 pm No comments: