'And they crucified him’ 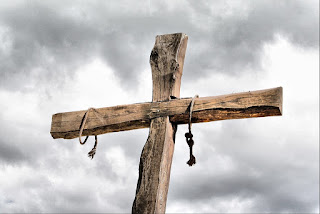 Crucifixion was a form of execution reserved for the lowest of the low. Roman citizens were exempt from the cross. It was a cruel, degrading death. Nailing a common criminal to a cross sent out a powerful message, ‘This is what you get if you mess with Rome.’ Yet that is not how we tend to view crosses today. If you see a vehicle hurtling towards you with a cross emblazoned on the side, you breathe a sigh of relief. You have fallen ill and here is an ambulance with paramedics inside to care for you and make sure you get proper treatment.

Countless thousands of people were crucified during the period of the Roman Empire. Yet it took the death of one man by crucifixion to transform the meaning of the cross. That was Jesus Christ. Viewed in one way, he was a victim of the ancient equivalent of ‘cancel culture’. His teaching upset the leaders of the Jewish people. They wanted Jesus silenced. Dead men don’t speak, so the religious authorities pressurised the Roman governor Pontius Pilate into condemning Jesus to death by crucifixion. Pilate knew that Jesus was an innocent man, but he had him crucified anyway.

Another brutal display of Roman power. Yet Jesus knew full well how he was going to die on that first Good Friday. He made no attempt to evade arrest, or to argue his case before those who sat in judgement upon him. He willingly gave himself to the death of the cross because he knew that was the only way to break the power of sin. Sin is defiance of God’s throne that cries to high heaven for justice to be done. Even in our culture where many believe that right and wrong are ‘all relative’ we can sometimes be shocked by the horror of sin; the atrocities of totalitarian regimes, the murder of a young woman on the streets of our capital city.

Jesus came to lay down his life for the sins of the world so that we may be forgiven and be put right with God. Thus understood, the cross of Jesus was the greatest act of love the world has ever seen. “For God so loved the world, that he gave his only Son, that whoever believes in him should not perish but have eternal life.”
Posted by Guy Davies at 8:00 am No comments: