Paul A Biography by Tom Wright 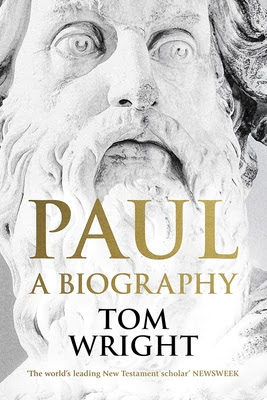 Any endeavour to understand the Christian faith and its impact upon the world must grapple with the apostle Paul. Who was this man who contributed huge chunks of the New Testament, and who Luke portrays as the great hero of the Acts of the Apostles? How did his ideas catch on and shape the future direction of the church? Is it possible to construct a convincing biography of Paul from the materials found in the New Testament? Tom Wright has certainly made a good attempt at answering these questions.

I really liked this biography of Paul and found it immensely enjoyable and informative. The author is an expert in the background history of Paul's times and deftly draws upon his knowledge of the period to bring the apostle to life. Wright offers a fascinating take on the development of Paul's thinking and personality. Inevitably the writer is a little speculative at times as he looks to fill in the gaps to construct a convincing Paul. How can it be known that Paul was meditating on the throne vision of Ezekiel 1 as he encountered the risen Jesus on the Road to Damascus, for example?

Wright adopts a conservative stance to the Pauline authorship of the letters attributed to him in the New Testament. He takes historical accuracy of Luke's Acts pretty much for granted. That said, the author is not afraid to question common assumptions. He argues for an Ephesian rather than Roman captivity as backdrop to the 'prison epistles'; Philippians, Ephesians and Colossians. He almost had me pursuaded on that one, but not quite. The theory he advances at least deserves serious consideration.

I would highly recommend this work to pastors and serious Christian readers. Wright enables us to approach Paul's life and writings with fresh appreciation and insight. Identifying Phinehas (Numbers 25:7-13) as an inspiration for Paul's persecuting zeal (Philippians 3:6) is a real eye-opener. The apostle to the Gentiles' role in ensuring the church did not split along Jewish/Gentile lines is  properly underlined. Wright is a fine writer and his narrative zips along nicely. His retelling of Paul's stormy sea passage to Rome (Acts 27) almost has you on board ship with the apostle and his shipmates. You can virtually taste the salty sea spray. There are many fine things here and I wish this could be a more glowing review. But there are some points of criticism.

The fly in the ointment is Wright's account of Paul's gospel of justification by faith. He translates 'the righteousness of God' in Romans 1:17 as 'the covenant faithfulness of God'. Justification is not so much about sinners being put right with God, as defining who belongs to the people of God.  He characterises the traditional Reformation reading of Paul's gospel as little more than a means of achieving the necessary merit for the believer to go to heaven when they die.  Over and against this reductionist account Wright sets his more capacious understanding of Paul's theology. According to him the main focus of the apostle's eschatology is on the resurrection of the body and the hope of a new creation.

The 'Poundshop Paul' of Protestantism needs the enrichment of Wright's superior 'Harrods' product. That ain't necessarily so. On the justification front, Paul certainly seems to place the forensic aspects of the doctrine front and centre. 'Justification' is the polar opposite to 'condemnation' (e.g. Romans 8:33-34). Certainly, those who believe and are justified also belong to the people of God, but the thrust of justification is vertical rather than horizontal. Having said that, no account of justification is complete if it fails to spell out the implications of the doctrine for church life. See The Gospel of Free Acceptance in Christ and Christ and the Covenant by Cornelis P. Venema for a thoroughgoing critique of Wright's methodology and teaching on justification by faith.

Wright almost gives the impression that Evangelicals are so fixated on dying and going to heaven that they have failed to notice that Paul (among others in the New Testament) has a thing or two to say about the resurrection of the body. I wonder. My current 'big read' is The Christian Faith: A Systematic Theology for Pilgrims on the Way, by Miachael Horton, (Zondervan, 2011). I'm getting towards the end now, and am in the process of reading Horton's chapters on eschatology. Interestingly, in chapter 27 the theologian makes the point, "Going to heaven when we die is the way station, not the final hope announced in the gospel." (p. 906). The 'final hope' is described thus, "In the consummation, not only the earth but heaven itself will become new. As human bodies will be reunited in everlasting joy with their souls, so too earth and heaven will become one cosmic sanctuary of everlasting joy." (p. 915). Richard B. Gaffin Jr has also emphasised the central importance of the resurrection hope in Paul's theology in his Resurrection and Redemption: A Study in Paul's Soteriology (P&R, 1987 edition).

This is not a late development in the Reformed tradition, either. Book III:XXV, of The Institutes of the Christian Religion by John Calvin is entitled On the Last Resurrection. In the space of 17 pages the Reformer anticipates many of the main arguments made by Wright in his excellent, The Resurrection of the Son of God (SPCK, 2003). According to Calvin, "Wherefore, he alone has made solid progress in the gospel who has acquired the habit of meditating continually on a blessed resurrection." (See this series of blogs on John Calvin and the resurrection of the body).  In his Body of Divinity, the Puritan Thomas Watson discusses Question 38 of the Westminster Shorter Catechism 'What benefits to believers receive from Christ at the resurrection?' He insists, "The doctrine of the resurrection is a fundamental article of our faith...The saved body shall rise again." His treatment includes this remarkable insight, "The bodies of the saints in the grave, though separated from their souls, are united to Christ. The dust of a believer is part of Christ's mystic body". (Emphasis added, A Body of Divinity, Banner of Truth Trust, 1978, p. 305, 309). The Reformed tradition has taught consistently that for the believer dying and going to heaven is but the intermediate state. The ultimate is the resurrection of he body and the renewal of creation.

Wright's account of key aspects of Paul's teachings leaves something to be desired. His work scores more highly when it comes to helping readers get inside Paul's world, perhaps even inside the apostle's head as he proclaimed the gospel, planted churches, agonised over them, suffered for his faith, and at last sealed his testimony with his own blood.

The Jesus-following communities Paul gathered and the letters he addressed to them changed the face of the ancient world. Paul's life and writings continue to resonate today, for the good news he preached is, after all, "the power of God for salvation to everyone who believes, to the Jew first and also the Greek." (Romans 1:16).
Posted by Guy Davies at 4:43 pm No comments: