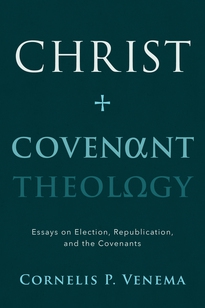 For my next trick, I, a convinced Baptist will review a book on covenant theology. Maybe that seems a bit like a strict teetotaler venturing a view on the finest vintage port, when never a drop has touched their lips. Or a Vegan discussing the best cuts of beef, when all they know is nut roasts and cabbage. Covenant theology and Baptists? Er,  no.

Well, it's a yes, actually. Covenant theology isn't the preserve of Presbyterians and other paedobaptist types. Baptists get a look in too. After all, we believe the Bible and there's a lot of covenanty stuff in there. The thing is, what's the nature of the various biblical covenants, and how do they relate to each other?

For starters, did the relationship between God and Adam take the form of a covenant, and if so, what kind of covenant was it? Important, this one. What we make of the Adamic administration will help to shape our view of subsequent covenant dispensations. Venema argues convincingly that the arrangement between God and Adam in the Eden took the form of a covenant. That applies, even though the word berith isn't used in Genesis 1-3, or elsewhere in Scripture to describe the arrangement, with the possible exception of Hosea 6:7. Venema cautions against word/matter fallacy insisting, De vocabulo dubitetur, so salva ("the word may be in doubt, but the matter is certain"), p. 422. In other words, if it walks like a duck, swims like a duck and quacks like a duck, it's not exactly a pigeon, is it?

The essential elements of a covenant being present, Reformed theologians have variously labelled the relationship that obtained between God and Adam as a "covenant of works/nature/life". If Adam had obeyed the terms of the covenant, his reward from God would have been eternal life and blessedness for himself and all humanity in him. The penalty for breaking the covenant was death for Adam and all humanity.

Scholars following the lead of Meredith Kline hold that the "covenant of works" was established on the basis of strict merit. Adam's obedience would have earned him and all men in him eternal life in fellowship with God. Venema begs to differ. The promised blessings far exceed Adam's just deserts. Perfect obedience was simply God's due and in itself merited no reward. The Westminster Confession of Faith speaks of "some voluntary condescension on God's part" by which the Creator covenanted to reward Adam's obedience. If there is merit here, it is "covenanted merit", not strict merit.

A nifty Tabular Comparison of the Westminster Confession of Faith (WCF) and the Second London Baptist Confession (SLBC) shows that Baptists followed the Presbyterians in regarding the arrangement between God and Adam in covenantal terms. See Chapter VII. The wording of point 1 of this chapter is virtually the same in both confessions. For some reason the Baptists dropped the clarifying statement in WCF VII.2. Not sure why. Would anyone notice if I popped it back in?  Greg Nichols has a helpful treatment of the Adamic Covenant in Appendix 2 of his Covenant Theology: A Reformed and Baptistic Perspective on God's Covenants (Solid Ground Christian Books, 2014, p. 321-358). He agrees with Venema that while the "covenant of works" demanded perfect obedience from Adam, it operated on the basis of God's undeserved favour, not strict merit in terms of the immeasurable reward offered.

Adam failed to win the blessings of life eternal for humanity under the "covenant of works". But all was not lost. Both the WCF and SLBC state that, the Lord was pleased to make a "covenant of grace, wherein he freely offereth unto sinners life and salvation by Jesus Christ" (WCF VII. 3 SLBC VII. 2). Christ is the covenant head of God's new humanity, as Adam was the covenant head of sin-ruined humanity. According to Reformed expositors, this covenantal understanding of Adam and Christ is borne out by Romans 5:12-21 and 1 Corinthians 15:20-22, 42-49.

From Adam to Moses. A dispute has arisen in the Reformed world as to whether the Mosaic covenant was a republication of the "covenant of works". Kline and those who follow his line insist that the Sinaiatic dispensation promised blessing in return for strict obedience. Although Venema makes no reference to him here, the Puritan John Owen also advocated the republication view, which proved influential among early Particular Baptists. Given the emphasis on law in the Mosaic covenant and the link between blessing and obedience/curse and disobedience in Leviticus and Deuteronomy, the Owen/Kline view seems to have something going for it. Leviticus 18:5 seems to bear this out.

The author gives special attention to the republication lot's trump card, Leviticus 18:5. The apostle Paul for one seems to say that the text in question promised life as a reward for obedience, which is a bit covenant of worksy, to say the least. See Galatians 3:12 and Romans 10:5. Venema places Leviticus 18:5 within the context of the Mosaic covenant as a whole, where it was addressed to God's chosen and redeemed people to whom the law was given as a rule of life. Only when divorced from the covenant of grace does the law become a demand that damns. That was the problem with which Paul was confronted in the form of legalistic Judaism. Hence his concern to contrast Leviticus 18:5 understood as meritorious demand with the opposing principle of justification by faith apart from the works of the law. Baptist theologian Greg Nichols concurs,

Things get a bit more controversial from a Baptist point of view in the chapters that follow on covenant and election. The sticking point is whether the children of believers are included among God's people under the new covenant as they were under the old. Venema, upholding the WCF tradition says, 'yes', me, a 1689er says, 'no'. But there are points of agreement too.  The covenant of grace is the historical outworking of the covenant of redemption between the persons of the Trinity in eternity. There is therefore a relationship between election and the covenant of grace. Agreed. With this thought in mind Venema deals sensitively  with the issue of Election and the Salvation of Children of Believers Who Die in Infancy (Chapter 6). Baptists do not regard their children as members of the covenant people of God until they profess faith in Christ, but with the WCF the SLBC holds, "Elect infants dying in infancy are regenerated and saved by Christ through the Spirit" (X.3 - both confessions).

Now to points of disagreement from a Baptist perspective. Under the old covenant not every member of the people of Israel was personally elected to salvation through faith in the promises. Paul makes that clear in Romans 9:6-18.  The circle of the covenant community was  wider than the circle of the elect. In fact, among the circumcised descendants of Abraham there was only a "remnant chosen by grace" (Romans 11:6). Membership by natural descent was precisely the weakness of the old covenant, which made it ripe for abolition, Jeremiah 31:31-34. Under the new covenant belonging is not based on birth, but belief in Christ, Galatians 3:26-29. That is why the sign and seal of the new covenant is not circumcision, but baptism on profession of faith. One of the ways in which the new covenant is superior to the old is that the godly are no longer a remnant within a largely apostate covenant community, as was often the case with Israel. The church is a gathering of visible saints, more closely corresponding to the elect than was the case under the old covenant. Paedobaptism undermines this, sometimes muddying the waters quite badly. (No baptismal pun interned).

Acts 2:38-39 isn't the clincher for Paedobaptism that Venema claims. The children of Peter's hearers "and all who are far off" would only receive forgiveness of sin and the promised Holy Spirit on repentance from sin and faith in Christ, sealed by baptism. Unless Venema is willing to allow that "all who are far off" are eligible for baptism before they come to faith in Christ, as well as the children of believers. No? Well, then. That said, Paedobaptism notwithstanding, the WCF exhibits a much richer understanding of Baptism and the Lord's Supper as signs and seals of the covenant of grace than the SLBC (compare WFC XXVII with SLBC XXVIII - scroll down the Tabular thing a bit). In Baptist circles baptism can be reduced to a rather damp way of publicly professing one's faith, rather than a means of grace.

Next up Venema devotes three chapters to discussing Federal Vision teaching, which involves a pile of wrongheaded ideas that have been influential in American Reformed Presbyterian circles. FV holds that every church member and their children must be assumed to be elect, even though some may fall away. Infant baptism is regenerative, although again, some who were baptised as infants may turn away from the faith. Justification is merely forgiveness, with no imputation of Christ's righteousness. The works believers perform as an outworking of their faith have a role in their final justification. Venema refutes these notions with his customary thoroughness. I couldn't help thinking that freaky FV notions wouldn't have developed within a framework of Reformed Baptist theology. For me reading these chapters was a bit like eavesdropping on two people arguing. One you think is a bit wrong (Venema in his Presbyterianism), but the other you reckon is totally off the scale (the FVs).

I wish less attention had been given to FV nonsense and more to the subject of the final chapter, Covenant and Justification in N. T. Wright's Interpretation of Romans 5:12-21. Wright's views certainly have more of a global reach than the rather domestic FV controversy. Here is Venema at his best. He states Wright's position with fairness and clarity, and then shows how his understanding falls short both in terms of exegesis and theological reasoning. Wright claims that his biblical studies approach to Romans 5:12-21 avoids importing later theological concerns into his reading of the text. But systematic theology has something to offer when it comes to setting individual passages of Scripture in the context of the whole counsel of God, and showing how various biblical doctrines fit together as an interconnected whole. As in Adam all stand condemned, so all who are in Christ are constituted righteous, justified by faith alone. The broken symmetry of the Adam/Christ relationship in Romans 5:12-21 is best understood in covenantal and forensic terms. Wright's focus on identifying who belongs to the people of God doesn't quite cut it.

Christ and Covenant Theology is a big read that demands careful thought and attention. Baptists may not always agree with his conclusions, but will find in Venema a stimulating dialogue partner as they seek to develop a distinctively Baptistic covenant theology. The writer's emphasis on the central importance of Christ in the covenant of grace is surely welcome,


Christ is the Alpha and Omega, the origin and end of God's loving and gracious purpose to dwell in everlasting communion with his covenant people...All the ways of God find their beginning and fulfillment in and through the work of Christ, and this is most powerfully testified through the history of the covenants. (p. 434).

* A boiled down version of this review will be published in the Banner of Truth Magazine at some point.
Posted by Guy Davies at 6:03 pm