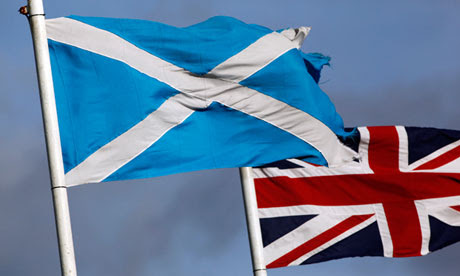 Scotland: Say 'yes' to over 300 years of shared history, values  and common endeavour. Vote 'No'.
Posted by Guy Davies at 9:02 am No comments:


My contribution to The Spectator's Stay! campaign,

One of the great things about being British is a sense of dual identity. I’m a proud Welshman living in England. I have a deep love of my homeland; its history, culture and rugby playing tradition. But belonging to a small nation could become a rather parochial and inward looking affair. That Wales alongside Scotland, Northern Ireland and England belong to something bigger than their constituent parts helps ensure that Celtic and English patriotism doesn't degenerate into a narrow, sectarian nationalism. We can focus on what unites as well as our distinctives as we strive to make Great Britain a great place for all its citizens to live.

The things achieved by the United Kingdom have been the fruits of our common endeavour. Together we have ensured that all adults, whether rich or poor, male or female get to decide on who governs us at the UK level, in our devolved Assemblies and the Scottish Parliament.   The National Health Service is funded by the wealth generated by the whole of the United Kingdom so that all our people can obtain the treatment they need when they need it, free at the point of need.

I could go on to mention the technological advances of the Industrial Revolution, driven by English entrepreneurialism, inspired by Scottish Engineering brilliance, forged by Irish labour and fired by Welsh coal. What of British ideas of freedom, tolerance and democracy that have served as a beacon of hope for the world, especially as we stood shoulder by shoulder to defend them in two World Wars?

Christians should be doing stuff, like transforming the culture and redeeming society and that. Preaching the gospel so that people get saved and nurturing disciples in the church is alright, but we've got to get with the world-changing, holistic, transformational program. What we need is a distinctively Christian approach to politics, education, the arts, medicine, engineering, plumbing, fast food serving and rubbish collecting. Anything less would be Pietism and we all know that's a Bad Thing. And anyway, if  believers don't make all kinds of stuff go Christian how's the new creation going to happen?

Whoa up a bit. David VanDrunen's essential thesis is that it isn't in fact the duty of Christians to try and transform, redeem or Christianise the culture at all. 'What?' you may say, 'is he a Pietist,  or something?' Nooo. Good 'ol Calvinist. He seeks to recover the 'two kingdoms' vision of the Reformers as a way of engaging with the transformationalist tendencies of the likes of Tom Wright, Tim Keller and other influential figures.

Essentially it boils down to this: there are two kingdoms. There is the 'common kingdom' which is ruled by God under the terms of the Nohaic covenant established in Genesis 9. Then there is the 'kingdom of God'. That is God's saving rule made known in the world through the covenant of grace in its various manifestations, from the Abrahamic to the new covenant. The believer belongs both to the kingdom of God and the common kingdom. That was the case under both old and new covenants as VanDrunen demonstrates.

In the common kingdom believers rub shoulders with non-believers as they engage in a variety of cultural pursuits including politics, work, education, the arts and so on. The believer will seek to honour the Lord in this context, but the same ethical standards will be expected of a Christian accountant, for example, as a non-Christian one. It is nonsense therefore to speak of 'Christian accountancy' or 'Christian plumbing'. Christian as well as non-Christian plumbers are both obliged to install central heating systems that don't leak like a sieve. OK, you would hope that a plumber who is a Christian wouldn't charge a little old lady the earth for fixing a dripping tap. But fair pricing policies aren't the exclusive preserve of believers. That's life in the common kingdom.

The kingdom of God is made a visible reality in the church, the gathered people of God who meet to hear God's word proclaimed, partake of the sacraments and be built up in the faith. Ministerial power in the church is different from the power entrusted to rulers in the common kingdom. It is non-coercive and is limited to the preaching and application of the Word. Ministers must be not to overstep the mark by giving believers detailed instruction on how they should operate in the common kingdom in terms of involvement in politics, voting intentions and so on. Yes, general biblical principles must be worked out in the whole of life, but Christian liberty must be honoured when it comes to matters like political choices and decisions regarding how the children of believers should be educated. If the Bible doesn't say, either explicitly or by implication, 'thou shalt vote Conservative, or Labour, or Lib Dem, or Ukip, or Yes or No to Scottish independence' then pastors should not go beyond the teaching of Scripture when ministering to the people of God. The same goes for parental choices regarding their children's education, whether home, Christian School, State School, or whatever.

VanDrunen calls for a biblical realism when it comes to the extent to which the world can be 'Christianised' by the activism of believers. The aim of the Christian is not to 'transform' or 'redeem' the common kingdom, for the form of this world is passing away. Redemption and transformation are only possible in the kingdom of God. That is not to say that believers may not strive to be 'salt and light' and try to make the world a better place. But even when they do that, their works in the common kingdom don't help to usher in the new creation. Christ has guaranteed that glorious future by completing the work God initially entrusted to Adam in Genesis 1 & 2.

On which point I think that it's a blunder on the author's part to conflate the 'cultural mandate' of Genesis 1:26-28 with the 'covenant of works' in Genesis 2. The 'cultural mandate' was issued to man as man 'male and female' as God's image-bearers. It continues despite the fall, but is only finally fulfilled in Christ and the new creation. Adam's 'covenant of works' role, however does not continue. It was made with Adam specifically as federal representative of all humanity. We should certainly not think of ourselves as finishing off what he failed to do by our works in the common kingdom. Christ has accomplished that on our behalf by his redeeming work. As Herman Bavinck said, 'Christ takes is not to the beginning, but the end of the road that Adam had to walk.' Nevertheless, the langue of multiplication in Genesis 1 is also used of God's 'new humanity' in the Abrahamic covenant, Exodus 1 and also in Acts of the church. The cultural mandate of dominion and multiplication continues in the 'common kingdom', but grace perfects nature in the 'redemptive kingdom', Hebrews 2: 5-9, Revelation 7:9-10.

That said, I agree with VanDrunen's biblically argued cause for the two kingdoms view. It has helped me to think through one or two issues personally. Especially when it comes to involvement in the activities of the common kingdom.  As a governor in a local state secondary school it is not my duty to try and 'Christianise' the educational establishment in which I am involved, but rather to operate in line with the rules and guidelines set down for all governors irrespective of their faith. Yes, my faith informs and influences my approach to governance, as with everything else, but trying to 'redeem' the school would be misplaced. The church is the locus of God's redemptive activity, not the world of education, or any other cultural pursuits in the common kingdom for that matter. The transfomationist agenda is a grandiose distraction from getting on with the Great Commission that Jesus has laid upon the church. That's enough for us to be getting on with.
Posted by Guy Davies at 7:58 pm 4 comments: