Ten Cities that made an Empire by Tristram Hunt

These days Tristram Hunt is probably best known as Labour's Shadow Secretary of State for Education. He considered putting himself forward for the Labour leadership election, but was unable to garner enough support from fellow MPs. Of the 'Blairite' right, he has thrown his support behind Liz Kendall. Who knows whether Labour will in fact opt for the leftist Jeremy Corbyn, and in all likelihood consign itself to electoral oblivion? As an historian Hunt knows full well that no institution is bound to last for ever. The impregnable seeming British Empire had its rise and fall. It remains to be seen whether the British Labour Party has a future, or will soon be consigned to history. If the worst comes to the worst politically, at least Hunt will be able to return to his old day job, so it's just as well that he continues to publish historical works. And very good ones at that.

Horace Walpole affected amazement at how in founding world-spanning empire, 'a peaceable, quiet set of tradesfolks' had somehow become 'heirs-apparent of the Romans'. It kind of just happened, who knew how? But, contra Walpole, it took considerable effort, ingenuity and brute force to create, develop and sustain the British Empire. The distinctive feature of Hunt's account of this story is that he shows the effect of empire on ten key cites and explains how those cities in turn helped shape the direction of British imperial expansion. A chapter is devoted each city; Boston, Bridgetown, Dublin, Cape Town, Calcutta, Hong Kong, Bombay, Melbourne, New Delhi and Liverpool.

As the Empire touched on these cities it transformed their buildings and streets and impacted upon both the colonised and colonists. Hunt introduces us to tales of ambitious empire builders, audacious land grabs, rapacious traders and well-meaning social reformers. He guides us though the burgeoning cities of empire, with all their grime and grandeur. The author is not one to moralise, but the less savoury aspects of empire are laid bare, the barbarity of the slave trade, the casual racism endemic in British Raj, Hong Kong and the Opium Wars and so on. While the empire may have bestowed benefits on the lands it colonised, there was always a price to pay. A salutary reminder that 'British Values' haven't always been all love and light.

The British Empire was touted as the one on which the sun never set. But the sun did eventually come down on the Empire and when it did, that had just as much an effect on Liverpool as an imperial port, as it did New Delhi. But Liverpool, which fell so low during the 1980's as a result of imperial decline is now being transformed once more as a result of massive Chinese investment in its infrastructure. A case of reverse colonisation, perhaps? Payback time for 'borrowing' Hong Kong.

Hunt writes well, packing in a mass of detail, but without leaving the reader feeling overwhelmed by the fast-paced narrative. His city-by-city approach to the story of empire enables him to blend intimacy with the big picture. The work is a reminder of the historic importance of world-shaping cities. In his book, Center Church, Tim Keller notes, "In 1950, New York and London were the only world cities with metro-area populations of over ten million people. Today, however, there are more than twenty such cities — twelve of which achieved that ranking in the last two decades — with many more to come." [Keller, Timothy; Keller, Timothy (2012-09-04). Center Church: Doing Balanced, Gospel-Centered Ministry in Your City (Kindle Locations 4259-4260). Zondervan. Kindle Edition. The emergence of global cities].

Pride of man and earthly glory,
Sword and crown betray His trust;
What with care and toil He buildeth,
Tower and temple fall to dust.
But God’s power, hour by hour,
Is my temple and my tower.

*I am grateful to the publishers for sending me a complementary review copy.
Posted by Guy Davies at 4:49 pm No comments:

The Heart of Christ by Thomas Goodwin 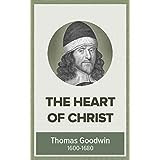 The Heart of Christ Towards Sinners on Earth
by Thomas Goodwin, Kindle edition.

On Sunday evenings I've been doing a series on Jesus our Prophet, Priest and King. In considering Jesus' High Priestly work I wanted to devote a sermon to Hebrews 4:15, with a special emphasis on our Lord's sympathy. The commentaries don't have a lot to say about that aspect of the verse, but I remembered finding Paul Cook's 1980 Westminster Conference paper, Thomas Goodwin: Mystic?' (see here) helpful in exploring the theme. Cook devotes careful attention to the title under review. Having read his piece I intended to look up the Puritan preacher's work for myself, but I'd never got round to it. The prospect of preaching on Hebrews 4:15 provided just the stimulus I needed to make that good.

It really is a remarkable little work. Goodwin reflects on the heart of Christ towards his people as set out in Hebrews 4:15 biblically, theologically and pastorally.

Biblically he reasons from expressions of Christ's heart towards his people during his earthly life and ministry, especially as found in the Farewell Discourse of the Gospel According to John, chapters 13-17.

Theologically Goodwin shows how each person of the Trinity is involved in fitting the person of Christ to act as our sympathetic High Priest. In addition he points out that the human nature of the exalted Son of God is endued with heightened intellectual, emotional and bodily powers. That makes him all the more able to sympathise with his suffering people.

Goodwin argues that during the 'days of his flesh' (Hebrews 5:7) the emotional life of the incarnate Son was subject to imperfection, This is not to deny that he was 'without sin' (Hebrews 4:15), but that during Christ's earthly ministry he suffered frailty of body and soul and knew what it was to be disquieted and perturbed (Hebrews 5:7). The glorified Jesus knows nothing of such emotional weaknesses, but that does not mean we should conceive of him as unemotional. "His perfection destroys not his affections, but only corrects and amends the imperfection of them." [Goodwin, Thomas (2015-06-04). The Heart of Christ in Heaven Towards Sinners on Earth (Kindle Locations 1810-1811). Blue Letter Bible. Kindle Edition.]

In another sense Goodwin posits that even in his current glorified state Christ's emotional life remains in an imperfect state so long as his people are subjected to suffering in the world. He will only be perfectly happy when they are, "until he has filled them with all happiness and delivered them from all misery, himself remains under some kind of imperfection and answerably his affections also, which are suited to this his relation, have some want of imperfection in them, while they lie under misery, in comparison of what his heart shall have when they receive this fullness." [Goodwin, Thomas (2015-06-04). The Heart of Christ in Heaven Towards Sinners on Earth (Kindle Locations 1855-1858). Blue Letter Bible. Kindle Edition.] Jesus will only know the totality of the fullness of the joy set before him for which he endured the cross when the last of God's many sons have been brought to glory.

Pastorally Goowdin  assures his readers that our sympathetic High Priest is able to do more than say, 'there, there' to his suffering people. His pity is joined with power (Hebrews 4:15, 7:25). "Come boldly (says the text), μετὰ   παῤῥησίας, even with open mouth, to lay open your complaints, and you shall find grace and mercy to help in time of need. Men love to see themselves pitied by friends, though they cannot help them; Christ can and will do both." [Goodwin, Thomas (2015-06-04). The Heart of Christ in Heaven Towards Sinners on Earth (Kindle Locations 1971-1973). Blue Letter Bible. Kindle Edition.]

A gem of Puritan pastoral theology that points God's suffering people to the sympathetic, love-filled heart of Christ.
Posted by Guy Davies at 6:54 pm No comments: