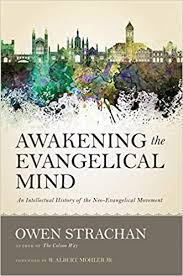 On my study bookshelves I have at least one commentary on each book of the Bible. More again if you count Kindle and Logos editions. Most are scholarly works by Evangelical writers. Then there are countless theological titles dealing with a wide variety of subjects from the atonement to apologetics, historical works, and so on. Many have been published in the last 30 or 40 years by notable Evangelical scholars. These writers are in turn the product of world class Evangelical theological schools and seminaries.This abundance of literary riches would have amazed postwar Evangelicals. Today we tend to take it for granted.

I finished reading this a while back, yet never got round to writing up a review until now. Must have slipped my mind. It was a 'fits and starts' read, anyway. Not that it wasn't any good, but I bought it cheap, a Kindle special offer and tended only to look at it occasionally. Like when I found myself hanging around for some reason or other, and wanted something to read to redeem what otherwise would have been wasted time.

In the 1930s and 40s theological academia was dominated by Liberal scholarship. Evangelicals working in the field were few and far between. Fundamentalists tended to view scholarly pursuits with some suspicion. They stuck to the Bible, stuck it to the Liberals, and that was about it. The trouble with that anti-intellectual approach was that it left Evangelical students bereft of the tools they needed to give a cogent defense of their beliefs in the academic world. Thankfully, the same cannot be said now.

In this title Owen Strachan tells the story of how the founders Neo-Evangelicalism helped to reawaken the Evangelical mind. With the support of Billy Graham, Harold John Ockenga and Carl F. H. Henry led the way. Between them they founded institutions such as the National Association of Evangelicals, Fuller Seminary and the magazine, Christianity Today. Scholars such as Edward John Carnell, Kenneth Kantzer, John H. Gerstner, and George Eldon Ladd added their weight to the movement. They had big plans to capture the commanding heights of academia for the gospel. New books were published and older writers like Jonathan Edwards were rediscovered. The 'Neos' were self-consciously different to the 'Fundies' in their approach. Henry's The Uneasy Conscience of Modern Fundamentalism attacked the truncated world view of the Fundamentalists.

Not all of the Neo-Evangelicals ambitions were realised, and today's Evangelicalism is not without its challenges in the academic world. Holding to the authority Scripture, substitutionary atonement and the new birth is never going to be fashionable in any generation. But that is where we stand. Carl Henry was a revered figure at London Seminary where I trained for the ministry (1988-90). His books were warmly recommended by the faculty. The Evangelical elder statesman visited the seminary when I was there and gave a talk on the doctrine of Scripture.

In a conclusion Strachan draws some helpful lessons from his study that are worth pondering. We owe a debt of gratitude to the likes of Henry and Ockenga, without whom pastors' bookshelves would be less well stocked than they are today. May this account of their efforts serve to inspire contemporary Evangelicals to rise to the intellectual challenges of our post-modern, pluralistic and secular age, 2 Corinthians 10:5.
Posted by Guy Davies at 6:57 pm No comments:

The Good News of Easter

Yes, there are Easter Eggs in the shops, which is good news of a sort. Easter bunnies and bonnets are fun too, if you like that kind of thing. The good news I have in mind is quite different. Easter brings us face to face with the most important events in the Christian faith. Yes, Christmas is a biggie. Then believers celebrate the birth of the Lord Jesus. But why was the Son of God born into our world as one of us? Easter points to the reason. Again and again in his teaching Jesus told his followers that it wasn’t going to end well. He was going to be betrayed, condemned and crucified. His friends couldn’t take it in. If Jesus was the long-promised Deliverer, wasn’t he supposed to overthrow his enemies, rather than be killed by them?

But that’s exactly how it turned out. It was meant to. Jesus did come not as a teacher of moral principles, or a spiritual guru, or a political activist. He was a Deliverer. He brought deliverance by laying down his life for his enemies. Christ died for our sins, paying the price for our rebellion against God. At the cross of Jesus we see God’s just demands met and his love for us revealed to the full. As Paul writes in the Bible, “but God shows his love for us in that while we were still sinners, Christ died for us.” Although broken by sin, human beings are not worthless. God values us so much that he sent his Son to die in our place. That’s good news.

Jesus’ followers didn’t see it quite like that. They thought all was lost when Jesus died. After all, what good was a dead Deliverer? They were right. Jesus’ friends, however, seem to have forgotten that he did not merely predict his death. He told them that after three days he would rise again. That is why his tomb was empty the first Easter Sunday morning. That is how he was able to appear before his followers and show them he was alive. The resurrection of Jesus demonstrated that he was the Son of God. His death really had paid the price of sin. By faith in him we can be forgiven and be put right with God. Jesus lives. The power of death had been broken. All who belong to Jesus will be raised up and make like him when he returns in glory. On that day everything sad will come untrue. All because of Easter. If that’s not good news, I don’t know what is.

*For News & Views and Trinity parish magazines
Posted by Guy Davies at 5:38 pm No comments: