On Christian Doctrine by Augustine of Hippo

One of the wonderful things about the advent of e-books is that it allows cheapskates like me to get hold of some of the classic works of Christian theology at bargain basement prices. The same title would have cost me £15.67 for a hardback edition or £8.05 for the paperback. Besides taking up more space on my already packed to capacity bookshelves. I first became aware of this title at last year's Banner Ministers' Conference, where Mike Reeves mentioned that in this work Augustine devotes a chapter to 'The Trinity the True Object of Enjoyment.' That sounded good to me and I swiftly downloaded a copy. I may have baulked at price of a hard copy , but at 0.77p, what's to lose? Not that investing in Augustine is ever a risky venture.

Augustine divides his treatment of Christian Doctrine into four 'Books'. Book I offers a general summary of Christian teaching. Book II is devoted to hermeneutics. Book III considers how the Bible teacher may attempt to resolve interpretive difficulties. Book IV reflects on how biblical truth thus discovered might best be taught to others. The main thrust of the work is hermeneutical. As Augustine writes in the Preface,

There are certain rules for the interpretation of Scripture which I think might with great advantage be taught to earnest students of the word, that they may profit not only from reading the works of others who have laid open the secrets of the sacred writings, but also from themselves opening such secrets to others.   These rules I propose to teach to those who are able and willing to learn, if God our Lord do not withhold from me, while I write, the thoughts He is wont to vouchsafe to me in my meditations on this subject. (St Augustine of Hippo (2012-07-08). On Christian Doctrine (Kindle Locations 281-288). Veritatis Splendor Publications. Kindle Edition.)

In Books II & III Augustine gives careful attention to 'rules for the interpretation of Scripture'. He deals with matters such as the importance of knowledge of the original biblical languages, understanding figurative speech, the usefulness of 'profane leaning' to the Bible expositor and the resolution of knotty exegetical problems. But his hermenutical reflections are not confined to literary matters. The doctrinal summary of Book I is Augustine's way of ensuring that the interpretive task is placed within a clear theological framework. While diversity of opinion on the meaning of some Scripture passages is to be expected, the exegete is not entitled to discern a meaning in the text of Scripture that would contradict the basic elements of Christian truth as clearly disclosed in the Bible and confessed by the Church. This approach is in line with what the Reformers would later describe as the 'analogy of faith'.

Augustine would have students of the word give themselves to the theological interpretation of Scripture so that their teaching will build up the people of God. While the Church Father does not avoid dealing with technicalities, his great desire is that a proper understanding the Bible and the powerful proclamation of its message should lead to the enjoyment of the God,

The only object which ought to be enjoyed is the triune God, who is our highest good and our true happiness. We are prevented by our sins from enjoying God; and that our sins might be taken away, "the word was made flesh," our Lord suffered, and died, and rose again, and ascended into heaven, taking to himself as his bride the church, in which we receive remission of our sins. And if our sins are remitted and our souls renewed by grace, we may await with hope the resurrection of the body to eternal glory; if not, we shall be raised to everlasting punishment. (St Augustine of Hippo (2012-07-08). On Christian Doctrine (Kindle Locations 448-456). Veritatis Splendor Publications. Kindle Edition.)

This thought is further developed in the chapter that first drew my attention to this work, Book I: Chapter 5 - The Trinity the True Object of Enjoyment.


The true objects of enjoyment, then, are the Father and the Son and the Holy Spirit, who are at the same time the Trinity, one Being, supreme above all, and common to all who enjoy Him, if He is an object, and not rather the cause of all objects, or indeed even if He is the cause of all.   For it is not easy to find a name that will suitably express so great excellence, unless it is better to speak in this way: The Trinity, one God, of whom are all things, through whom are all things, in whom are all things. (St Augustine of Hippo (2012-07-08). On Christian Doctrine (Kindle Locations 552-559). Veritatis Splendor Publications. Kindle Edition.)

Some of Augustine's exegesis is a little fanciful when compared the sober canons of interpretation laid down by the Reformers. Here and there his applications might give rise to a wry smile. He commends Ambrose inveighing against women using make-up as an example of the 'majestic style' of speech,

If thou art comely why dost thou hide thy comeliness? If thou art plain, why dost thou lyingly pretend to be beautiful...? (Augustine of Hippo (2012-07-08). On Christian Doctrine (Kindle Locations 5437-5439). Veritatis Splendor Publications. Kindle Edition.)

He justifies preachers using other people's sermons on the grounds that all truth is God's truth anyway and 'even those who could not compose what they say make it their own by composing their lives in harmony with it.' (St Augustine of Hippo (2012-07-08). On Christian Doctrine (Kindle Locations 5767-5769). Veritatis Splendor Publications. Kindle Edition.) Well, that's alight, then.

More seriously, Augustine insists that Christian teachers must practice what they preach, 'But whatever may be the majesty of the style, the life of the speaker will count for more in securing the hearer's compliance.' (St Augustine of Hippo (2012-07-08). On Christian Doctrine (Kindle Locations 5649-5650). Veritatis Splendor Publications. Kindle Edition.) And that before speaking the preacher must first lift up his soul to God in prayer,

And when the hour is come that he must speak, he ought, before he opens his mouth, to lift up his thirsty soul to God, to drink in what he is about to pour forth, and to be himself filled with what he is about to distribute. (St Augustine of Hippo (2012-07-08). On Christian Doctrine (Kindle Locations 4870-4873). Veritatis Splendor Publications. Kindle Edition)

Augustine hardly needs any commendation from me, but may I suggest in the words that marked the turning point in the great man's life, that you toll lege, or whatever the Latin is for 'download and read' his On Christian Doctrine. All this for only 0.77p. Go on. You know it makes sense.
Posted by Guy Davies at 10:20 pm No comments: 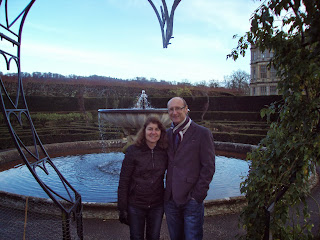 Once more Christmas came and went in a blur. The build-up was hectic, with extra church meetings of one kind and another, as well as the usual preparations for the Big Day. The follow-up involved family visits to Wales and London. My mum was meant to be joining us for Christmas, but my attempt to pick her up from Bassaleg had to be abandoned due to a Great Flood at Bradford on Avon. Good to have Jonny back with us on Christmas leave from Nottingham University.

We had some encouraging times at church, with a number of visitors at the Providence Carol Service. In the three Sunday morning services leading up to Christmas I preached on John 1:14, The Divine Identity, Real Humanity and Stunning Glory of Jesus (here).

Among my Christmas pressies (mostly clothes - as modelled above) was the recently published, From Heaven He Came and Sought Her, on definite atonement, edited by David Gibson and Jonathan Gibson. That should give me something to get my teeth into as 2014 unfolds. I also took advantage of Amazon's sale to download God's Philosophers, by James Hannam, for only 0.99p.


My main reading task for 2014 will be finishing Volume Four of Herman Bavinck's Reformed Dogmatics. After that I'll be free to make a start on The Christian Faith: A Systematic Theology for pilgrims on the way, by Michael Horton. I've been enjoying Charles Hodge: The Pride of Princeton, by W. Andrew Hoffecker and am about 2/3 of the way through. 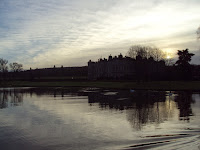 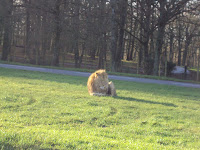 We had a lovely time at Longleat Safari Park on Boxing Day thanks to a friend who gave us complimentary tickets. We did the safari drive and got pretty close to the wildlife. The big cats seemed more lively in winter than we have found them in the heat of summer. The pantomime theme in Longleat House was fun, bumping into Prince Charming and Cindarella, Scrooge and various other characters. Oh yes, we did.

Yesterday afternoon Sarah and I went to see The Hobbit: The Desolation of Smaug. I enjoyed it better than The Unexpected Journey. We saw the first film in HFR 3D. The visual effects freaked my brain. Mainly because at least to me, the medium makes the characters look hyperrealistic against a rather static-looking background. Much better in good ol' 2D. Still, not sure that the director to wise to try and squeeze three films out of the original source material. But the cliffhanger ending made me want to see the concluding episode in December, even though I know what's going to happen next. The Hobbit was the last bedtime story I read to Jonny and Becca, so it is still relatively fresh in my mind. As much as anything is fresh in my mind these days.

We saw the New Year in with friends in Bulford, Wiltshire, which was nice. I was joint-winner of Dixit, a board game I'd not played before. Far be it from me to boast.

Today had been quite quiet thus far, which is nice so I was able to catch up with some non-theological listening/reading. A while back I downloaded Catastrophe: Volume One: Europe Goes to War 1914, by Max Hastings. It was a freebie sweetener from Audible.co.uk. I'd not listened to an audio book before, but gave it a go earlier today. I prefer reading to listening when it comes to books, but the scene-setting introduction and prologue were well interesting enough. A bit difficult to absorb all the information without being able to pause and review the text, though. Still, shouldn't look a gift horse in the mouth, I suppose.

I downloaded Seamus Heney's Beowulf when the poet's death was announced back in the summer. At the time I managed to read little more than part of the introduction, but today began to make progress on the epic poem itself. Beautifully translated; the verse crisp and clear, the narrative gripping and exciting.


Then a powerful demon, a prowler through the dark,
nursed a hard grievance. It harrowed him
to hear the din of the loud banquet
every day in the hall, the harp being struck
and the clear song of a skilled poet
telling with mastery of man’s beginnings,
how the Almighty had made the earth
a gleaming plain girdled with waters;
in His splendour He set the sun and the moon
to be earth’s lamplight, lanterns for men,
and filled the broad lap of the world
with branches and leaves; and quickened life
in every other thing that moved. [65-98]

I know not what else 2014 has in store, but at least I won't be sort of stuff to read, which is something.