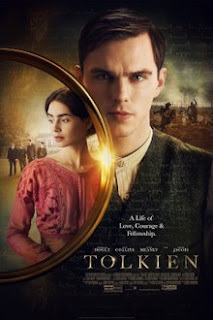 Last night we went to see this film at the delightful (and cheap) Westway Cinema in nearby Frome. The Hobbit was the last book I read to our children at bedtime before they decided they were too old for that kind of thing. I have, of course, seen the three epic Lord of the Rings movies and also Peter Jackson's Hobbit trilogy. One day I'll have to get round to reading the The Lord of the Rings books.

Right now I'm reading C. S. Lewis: A Life, by Alister McGrath. I've just finished the chapter on Lewis's conversion. McGrath details how Tolkien helped his Oxford friend, Lewis to make the journey from generic theism to faith in Christ. It is well known that Lewis, Tolkien and others formed the 'Inklings' literary discussion group at Oxford. Members used the group to try out their developing writing projects, including The Lord of the Rings.

Male friendship is a key theme in the Tolkien biopic. Together with his brother, the author was orphaned as a boy. His education was overseen by a Roman Catholic priest, who ensured he got into a good school in Birmingham. There Tolkien formed close friendships with three other boys. Together they were going to change the world and believed their close knit 'fellowship' could never be broken.

The film also touchingly depicts the burgeoning romance between Tolkien and childhood friend, Edith Bratt. They eventually married, but the course of true love did not run smooth. Father Morgan forced Tolkien to break off his relationship with Edith to pursue his studies at University.

Two of the school friends went to Oxford (Tolkien included), and two to Cambridge. The rugby scenes from Tolkien's university days brought home a resemblance between the actor who plays the eponymous writer, Nicholas Hoult, and the Welsh superwing, George North. But that's probably by the by.

Days of study were brought to a halt by the outbreak of World War One. Tolkien was involved in the Battle of the Somme. The film gives glimpses of how the horrors of war helped fuel Tolkien's imagination as he depicted the tremendous battle scenes in The Lord of the Rings. German flamethrowers become fire breathing dragons. Knights in armour emerge out of the haze of yellow mustard gas.

The war tested Tolkien's boyhood friendships to destruction. Accompanied by his loyal batman, Private Sam Hodges, Lieutenant Tolkien sets out across the trenches in search of  his poetically minded pal, Geoffrey Bache Smith. From life to literature, fast forward to Samwise Gamgee assisting Frodo Baggins in his quest to destroy the One True Ring.

Tolkien was a devout Roman Catholic. I've already mentioned his influence on C. S, Lewis's conversion to Christianity. This side of the Oxford writer's life is only subtly present in the film. But the themes of quest, the conflict between good and evil, fellowship and love loom large in this thoughtful and well-acted biopic. As they do in Tolkien's writings. The film draws out how these themes were the product of the author's life experiences. They were also an expression of his faith.

With the whole idea of friendship cheapened by social media, I wonder whether we have lost sight of the value of friendship as an aspect of Christian discipleship? See ‘Tolkien’ and the Dying Art of Fellowship for some thoughts on that.

The film ends with Tolkien penning the opening lines of what was to be my children's very last bedtime story, "In a hole in the ground there lived a...".
Posted by Guy Davies at 12:58 pm No comments:

The truth will set you free 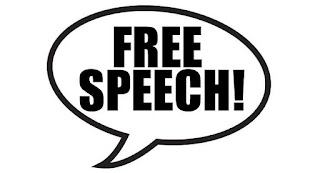 Free speech is rightly considered a cornerstone of democracy. We should be able to express our thoughts, even though others may disagree with us. No one has the right not to be exposed to opinions that aren't to their liking. Yet this noble tradition of free speech is being challenged in these days of 'no platforming' and 'Twitter storms'. People whose views are not exactly 'right-on' are being denied the opportunity to address public meetings and risk provoking outrage on social media.

Rugby players and philosophers have found themselves in hot water. Witness what happened to Israel Folau, Billy Vunipola and Roger Scruton in recent weeks. See Matthew Parris of The Times for the free speech implications of the rugby controversy, and Douglas Murray of The Spectator for the low-down on The New Statesman's hit job on the conservative intellectual. All rather worrying.

Strangely, it is often those who pride themselves in being liberal who are the quickest to shout down views they deem beyond the pale. Of course, they demand freedom to voice their own opinions, but the same freedom is not extended to others. That isn't liberalism, but another form of tyranny.

Freedom of speech is essential for calling the powerful to account. That is why dictators clamp down on the media and persecute their critics. They do not want their misdeeds exposed by the light of truth. As George Orwell put it, “In times of universal deceit, telling the truth is a revolutionary act”.

Valuing freedom of speech is a fruit of Britain's Christian heritage. As a Christian I don't just insist on my own right to free speech. I believe that people of other faiths and those who have no faith should also be free to express their convictions. We should have the freedom even to disagree with and criticise the beliefs of others. You can strongly disagree with someone's views, and yet treat them with respect as a person.

I'm glad I live in a country where I am free to follow my faith. In places like Afghanistan, China and North Korea Christians are actively persecuted by the state. (See Open Doors' 'World Watch List'. Jeremy Hunt the Foreign Secretary has recently spoken out about this outrage. Good on him. Religious freedom should be a basic human right for all people across the world. Baptists especially appreciate this point. We believe in the separation of church and state and do not expect the governing authorities to impose the Christian faith upon the nation.

Jesus did not come to impose a new set of burdensome rules and regulations upon human race. He came as a liberator to set us free from the dark forces of sin that bind us. That is why he died to pay the price of our freedom and rose from his tomb to release us from the power of death. God exalted Jesus above all rule and authority, yet he does not use his power to enslave or exploit his followers. Jesus promised all who believe in him, 'you will know the truth and the truth will set you free'. (John 8:32).

*For May editions of News & Views, Trinity Magazine, and White Horse News.