An unexpected visit to the National Gallery 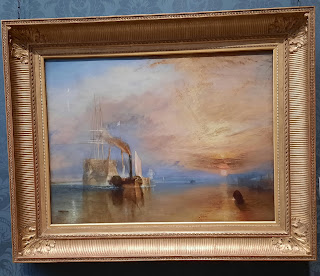 The car started to make a funny noise as we travelled to London for a family visit. The idea was that we would stay in London from Thursday to Saturday and then set off to Eastbourne for a two week break.
But as we turned off the M4 we noticed the car sounded a bit odd. Like our old school unleaded guzzling Ford Focus had transitioned into a whining elecric job. Freaky. On arriving at our destination a peek under the bonnet revealed a fluid leak. Not engine oil, but whatever it was, there was quite a bit of it. Too much to risk proceeding with our journey without getting it looked at.
A visit to a garage on Saturday morning revealed that the power steering pipe needed replacing. Couldn't be done until Monday at the earliest. We were stuck. In London. Where there's always stuff to see and do.
Like arty stuff in an air conned gallery during yet another summer 2022 hot spell. And so we braved the sweltering Bakerloo line and headed for the effortlessly cool National Gallery.
We hadn't visited for years, so it was like bumping into old friend after old friend as we wandered through the various exhibition rooms. There's Rembrandt as a young man and then as an oldie. The greatest self-portraits ever? And his epic Belshazzar's Feast.
I wanted to see Turner's The Fighting Temeraire. There it was. Like, wow. The ghostly old ship being towed to the breaker's yard by the fiery, modern tug boat. That sunset. On the way we saw Gainsborough's portraits of gentry couples proudly posing on their estates, shooting a confident gaze at their  viewers. Placed next to tenderly intimate depictions of the painter's young daughters.
Then the Monets and Reniors. Not to mention Van Gogh's Sunflowers, Chair and Wheat Field. It was the visual eqivalent of playing a setlist of all your favorite songs, with some welcome surprises thrown in. And this was a rushed 2 hour visit in which we sampled only some of the artworks on display in the grandeur of the National Gallery. All for free. To think, we could have been travelling to Eastbourne.
Posted by Guy Davies at 10:28 pm No comments:

Email ThisBlogThis!Share to TwitterShare to FacebookShare to Pinterest
Labels: Art

An Introduction to John Owen: A Christian Vision for Every Stage of Life, by Crawford Gribben 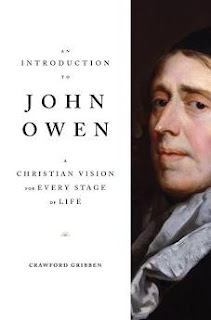 With Boris Johnson announcing that he is standing down as Prime Minister various candidates have been vying for his job. Now the list has been whittled down to the final two, Rishi Sunak and Liz Truss. It is up to Conservative party members to decide who will be the next occupant of 10 Downing Street. You would expect journalists to quiz the candidates on what they would do about the cost of living crisis if they gained power, would they cut taxes and so on. But these days it seems than no media interview or hustings event is complete without politicians being asked: ‘What is a woman?’ Tough question.

The dictionary definition is ‘adult human female’. No surprises there. But giving that answer could get a politician into hot water with those who believe that anyone who says they are a woman is a woman. Even if their anatomy suggests otherwise. Debates over the ‘trans’ issue have become a highly contested aspect of today’s ‘culture wars’. Everyday words are changed to reflect this. In guidelines produced by one NHS trust ‘mothers’ are renamed  'birthing parents’, ‘fathers’ as ‘second biological parent’. There is great concern over the number of children being referred to the NHS Gender Identity Development Service because they believe they were born in the wrong body. The vast majority of children seeking help are girls. It was recently announced that the Tavistock child gender identity clinic is due to close, following criticism the quality of care provided in an independent review.

Of course, people suffering from gender dysphoria should be treated with respect and given all the help they need. But there is no escaping biological reality. Each cell in our bodies either has two X chromosomes (female) or one X and one Y chromosome (male). That cannot be changed. It is the way God made us, “So God created mankind in his own image, male and female he created them.” The Bible honours the created differences between men and women, but also insists that male and female are of equal value and worth before God.

Jesus counted women as well as men among his early followers. According to the gospel accounts it was women who first discovered that Jesus’ tomb was empty and saw him risen from the dead. At the time of the early church society was deeply divided between ethnic groups, salves and masters, men and women. Yet the Christian message was one that brought people together. It teaches us that we are all sinners, but through Jesus we can be forgiven and be put right with God. To believe in him is to belong to his people, where there is “neither Jew nor Gentile, neither slave nor free, nor is there male and female, for you are all one in Christ Jesus.”

*For the August edition of various parish magazines

Posted by Guy Davies at 4:23 pm No comments: