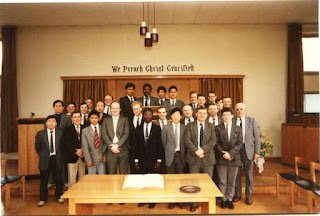 Yes, I know, they've since re-Christened it 'London Seminary', but when I started there some 30 years ago, it still had the 'Theological' bit. I could have applied to what was then the 'Evangelical Theological College of Wales' in Bridgend (now Union School of Theology - confusing isn't it?), but I wanted to spread my wings and train for the ministry outside of Wales. The irony is that the faculty was then composed almost entirely of Welshmen. Hywel Jones was Principal, Philip Eveson served as Resident Tutor, Graham Harrison lectured in Biblical Doctrine and Andrew Davies taught Church History. There was one token non-Welshman in the shape of Merle Inniger, who lectured on Missions.

The student body was quite international though, with friends from the Philippines, Korea, Malaysia, Ghana, Australia, Germany, Italy, Northern Ireland, Scotland, England and Wales. I was among the youngest of the students, at 22 years of age. Most were men of riper years. I used to joke that I was among the few LTS students who qualified for free milk.

I had only been a Christian for around four years when I began my studies and I wasn't especially well taught. In fact, there were gaping holes in my knowledge of theology, biblical studies and  church history. Added to that I had left school at the age of 16 and so wasn't used to writing essays and other academic work. I had very little experience of preaching, either. Looking back, it was a wonder they accepted me, but they did. Not sure why.

I had a thirst for knowledge, which was something. Before going to LTS I had devoured Martyn Lloyd-Jones' sermons on Romans and Ephesians and various other Puritan and Reformed books published by Banner of Truth, Evangelical Press, and so on. I may even have ploughed through Berkof's Systematic Theology. Back then I was a Calvinist with Congregational churchmanship, and had strong Lloyd-Jonsesian emphasis on revival and experiential Christianity. Now I'm a Baptist, but the other elements are still very much part of my outlook, reinforced by my time at seminary.

In terms of the teaching, I especially appreciated Hywel Jones' lectures on Isaiah, John and Hebrews. Such insightful exegesis and theological depth. Philip Eveson's treatment of the Wisdom Literature, particularly Ecclesiastes has yet to be bettered in my mind. He should write a commentary. In Eveson's lectures on Galatians he critically engaged with the 'New Perspective on Paul' way before the Evangelical world has woken up to what was going on in Pauline studies. I remember he took such a long time over Amos that some of the other Minor Prophets were given scant attention. One student popped out for a toilet break and missed Obadiah. Learning Hebrew and Greek was a struggle, but I've tried to keep up the languages with the help of Logos Bible Software and other aids.

Graham Harrison's teaching of Biblical Doctrine included a large element of discussion, with a strong element of pastoral application. He took no prisoners when it came to cutting 'know-it-all' students down to size. 'Well you're wrong' he would sometimes insist. Andrew Davies' lectures on Church History would occasionally morph into preaching. His treatment of 'Word and Spirit in Puritanism' and the Moravian Revival were cases in point. Such was the power of those addresses it was impossible to take notes. Andrew once rebuked students who thought it was quite amusing that they had failed to hand in their assignments. He looked over the top of his half moon spectacles in Headmasterly fashion and boomed, 'Gentlemen, I trust we are not funny men trying to be serious, but serious men who know when to laugh'. Scary.

When Mr Davies stood down due to ill health, he was succeeded by Robert Oliver of Bradford on Avon. His lectures were quite different in style to Andrew's, but equally well appreciated by the students. You could take notes. Merle Inniger taught World Religions and Jeremiah. He was a gracious and irenic character, often responding with 'I can go along with that' to students' remarks.

Considering the seminary put such a premium on the importance of preaching, not much time was devoted to the mechanics of sermon prep. Just one or two lectures, as I recall. But students were expected to speak in Morning Devotions and could expect some feedback afterwards. Once when it was my turn, Hywel Jones invited me into his study for some 'post match analysis'. He asked what I would think if instead of making a cake, my mum had just plonked a pile of ingredients on the plate. Apparently, my message was a bit like that. No theme or structure, just the raw materials.

We also had to submit sermon notes to members of the faculty, who then gave us the benefit of their opinion on our efforts. I can't recall what my sermon was meant to be about, but Robert Oliver helpfully suggested that I divide my material up under three or four headings to give the message some structure and a sense of momentum. To this day, my sermons have an intro, first, second and third points, then a conclusion. As I understand, the seminary now gives much greater focus to homiletical matters.

We had visiting speakers come in to address specific subjects like time management and ethical issues. The college deliberately took no position on Baptism, so a Baptist (Bob Sheehan) and Presbyterian (John Nicholls) came in as advocates of their respective views. Those sessions always led to heated discussions among the students, as did many other things including the Lloyd-Jones' teaching on the work of the Spirit and the meaning of Romans 7. We always seemed to be arguing about something, or other. Mostly good-naturedly.

I must say that moving from Bassaleg, a village just outside Newport, South Wales to Finchley, London was something of a jolt. I'd lived in the village all my life. I seemed to know everyone and they seemed to know me. London by way of contrast was big, busy and anonymous.

I met my wife while at LTS. She was a member of Kensit Evangelical Church, which meets in the same building complex as the seminary. Philip Eveson married us in July 1991. I doubt we'd have met otherwise, got hitched, and had two children.

Don Carson preached on John 1:1-18 at the End of Year Service when I left the seminary in June 1990. His dad was there, so some time later was interesting to read Carson's Memoirs of an Ordinary Pastor, an account of the Don's father.

My first pastorate in Dorset reflected what Thomas Hobbes said about life. It was 'nasty, brutish and short'. But the move to the Westcountry meant I got to know the folks at Providence Baptist Church as a visiting preacher. By a spooky providence, 2018 marks 30 years since me starting at London Seminary and 15 years ago today, on 15 November, I was inducted to the joint-pastorate of Providence & Ebenezer Baptist Churches. In the early days of my current pastorate I completed a BA (Hons) in Theology with the Greenwich School of Theology. I'd like to do further studies sometime, who knows when?

People ask me who I studied with at seminary, but they rarely recognise the names I reel off. Most have served in glorious obscurity rather than being 'big name preachers'.

There are several London Seminary men  in our locality including Ben Midgley at North Bradley Baptist Church, former principal Robert Strivens at Bradford on Avon. It's always a joy to renew fellowship with alumni at fraternals and conferences.

I'm grateful to the Lord for my time at London Seminary, which helped set me up for a lifetime of ministry. No training course can prepare a man for every eventuality of a pastorate, but I hope something of the ethos of the college has rubbed off and will never leave me. As seminary founder Dr. D. Martyn Lloyd-Jones held, the greatest need of the church and the world is for the preaching of the gospel in the power of the Holy Spirit.
Posted by Guy Davies at 11:02 pm No comments: