Evangelical 'Momentum' within the Church of England

In an article in the Church Times, Angela Tilby issued a wake-up call to the Church of England. Apparently, 'Momentum' is infiltrating Anglicanism. Not that kind of 'Momentum'. She wasn't worried that the good old CofE was going to be taken over by an influx of Marxtist-Lenninists brandishing the Morning Star and singing 'Oh, Jeremy Corbyn', rather than 'All Things Bright and Beautiful'. Maybe she wouldn't have minded that too much.

No, the worrying thing is that people who actually believe the Bible and possibly even a good chunk of the 39 Articles of Religion are in danger of  imposing themselves upon the Church of England. Whatever next? As Tilbury says, "It just seems wrong to insist that only those who claim to have a personal relationship with Jesus are real Christians, and that their priority should be about converting others." Crazy, like. You wouldn't find the great theologians of the Church spouting such nonsense; Athanasius, Augustine, and such. Let alone John Calvin and the Reformer Bishops of the Church of England; Latimer and Ridley. Pesky Evangelicals.

It may even be that, "what was once a well-tolerated but distinctive ideology of faith has become the accepted norm." It was no doubt very kind of non-Evangelicals to be so tolerant towards people who preach the gospel, but heaven forfend that their 'ideology' should become the norm. Evangelicals should know their place and content themselves with being a 'wing' of the Church alongside the other wings, rather than trying to take the place over. It's not as if the other 'wings' would ever try and do that.

The thought of an Evangelical 'Momentum' sweeping through the CofE, making it do evangelism and stuff, is giving Angela Tilbury an anxiety attack. Her response illustrates rather perfectly the problem that faces Evangelical Anglicans. They must stay in their Evangelical box, keep paying into the coffers and stop trying to remake the Church in their own image. But can Evangelicals content themselves with being a well tolerated 'wing' of a Church that has more 'wings' than KFC has of the chicken variety? The Liberal 'wing', Anglo-Catholic, Nondescript Mainstream, LGBT+ inclusive, and so on.

The thing that puts the Evangel into Evangelicals is the gospel of salvation by faith alone, through grace alone in Christ alone, to the glory of God alone. The preaching of this message is what constitutes the church as "a congregation of faithful men, in the which the pure Word of God is preached, and the Sacraments be duly ministered according to Christ's ordinance"  (Article XIX). Those who do not preach this message or sit under its proclamation are not the church in any meaningful sense of the word. Evangelicals who remain in theologically mixed denominations like the CofE must therefore either work to reform them, or leave.

Angela Tilbury laments, "Nowhere in today’s report is there any theological reflection on the nature of the current church decline." But any theological reflection must begin with God, take his self-revelation in Holy Scripture seriously and deal with the questions, 'What is a Christian?' and 'What is the Church?'. Michael Sadgrove Tweeted an appreciation of Tilbury's article in which he said, '@churchofengland⁩ is not a network of gathered evangelising churches.' But that's exactly the problem. The church of the New Testament was a network of gathered evangelising churches. Read Acts.

Tilbury casts the aspersion that Evangelicals are only interested in 'saving souls', and have little time for social justice. Who does she think led the campaign to abolish slavery, or agitated for better working conditions for ordinary men and women? The tradition of William Wilberforce and Lord Shaftesbury lives on among contemporary Evangelicals who work in disadvantaged communities. They run debt counselling services, organise food banks, serve as school governors, and help in countless other ways.

That said, Evangelicals might have something to learn from the Tilbury's piece. At least in her perception they are theological lightweights and ecclesiological pragmatists. They talk in business-speak, “envision, equip, and enable . . .”. This is unfortunate. Evangelical Anglicanism has produced some very fine theologians such as J. I Packer and John Stott. Packer and Stott sought to root Evangelicalism in the great theological tradition of Puritanism, the Reformers and the Church Fathers. Alpha Course Evangelicals would do well to return to the 'Old Paths' to add theological weight to the movement. Yet even here, Packer and Stott were more comfortable than they should have been with Evangelicalism being regarded as a  'well-tolerated ideology' within the broader Anglican set-up.

Serious questions need to be faced by Evangelicals within the theologically mixed denominations,

Are we content, as evangelicals, to go on being nothing but an evangelical wing, making our protests, exerting our influence, hoping that we can gradually infiltrate so that others may come to see the wrongness of their ideas and the correctness of ours? Are we content to go on doing that? (Knowing the Times, D. M. Lloyd-Jones, Banner of Truth Trust, 1989, p. 251).

Martyn Lloyd-Jones issued that challenge in 1966 in his address under the auspices of the Evangelical Alliance, Evangelical Unity: An Appeal. What the preacher said still resonates today. If the gospel defines what it means to be a Christian and what it means to be the church, the church must be evangelical, or it is no church at all. On that basis, we cannot be content with being an 'evangelical wing'. Why remain in alliance with people who deny that being a Christian means having a personal relationship with Jesus?

Angela Tilbury clearly believes that Evangelicals are the problem in the CofE. This depite the fact that Evangelical churches tend to be the ones that are growing in a context of general decline. She in effect says to them (echoing the words of king Ahab to the prophet Elijah), "Is it you, troubler of Israel?" To which Elijah famously replied, "I have not troubled Israel, but you...because you have abandoned the commandments of the Lord." (1 Kings 18:17-18). Quite.

Lloyd-Jones called upon Evangelicals to come together to bear united witness to the gospel. It is clear that their presence in the CofE is not welcome by Angela Tilbury and other leading figures in the CofE. To them you are little better than what 'Momentum' ideological extremists are to the Labour Party. Why stay where you are not welcome? Come out and come together with all who proclaim the gospel of Jesus.
Posted by Guy Davies at 5:17 pm 3 comments:

The Joy of Les Miserables 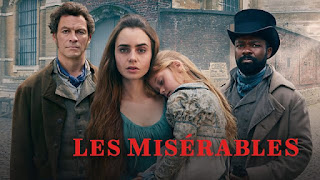 My mum has seen the musical version of Les Miserables twice.  It’s one of the longest running productions on the West End. Apparently, the show has been seen by 70 million people in 52 countries and 22 languages around the world. I saw the film of the musical when it came out a few years ago. But it was only in watching the BBC’s recently screened Les Miserables that the power of the story really came home to me. If you missed it, you can probably still catch it on BBC iPlayer. It is a brilliantly acted, magnificently staged and thought provoking drama. One of the most emotionally powerful things I've seen on TV for a while.

The story follows the twists and turns in the life of Jean Valjean, a convict who became a respectable businessman. The prison chief, Javert did not believe that it was possible for Valjean to come good. Once a criminal, always a criminal. He vows to hunt Valjean down when he is released from jail. Javert stands for justice without mercy,  justice with no hope of forgiveness.

As a former convict, Valjean could find nowhere to lay his head until a kindly bishop gave a bed for the night. True to form, Valjean stole the bishop’s silverware and headed off into the night. The police hunted him down and were about to force the thief return what he had taken from the bishop. Then something unexpected happened. The police wanted Valjean to face justice. Back to the prison hulks. But the bishop did more than show mercy, forgive the thief and let him off. He gave Valjean two silver candlesticks, explaining to the police that he must have forgotten them when he left in the night. That was a true moment of grace.

Such grace is a rare thing in today’s world. Look at what happened after Liam Neeson confessed to revenge fantasies the other week. Yes, what he thought about doing was wrong. He said as much himself. But many were quick to pounce on his remarks and label the actor as an unforgivable racist. Social media has turned us into merciless little Javerts for whom there is no conception of grace and no hope of redemption for those who have done wrong. With grace there is always hope, for grace gives us what we don’t deserve. Valjean certainly didn’t deserve a second chance. He knew it, and the grace shown him by the bishop turned his life around. That’s the joy of Les Miserables.

The Christian faith is all about grace. God sent Jesus to satisfy the demands of justice by dying for our sins upon the cross. In his mercy, God offers us forgiveness for the wrong things we have done. Grace goes beyond even that. Those who believe in Jesus are welcomed into God’s family and given the hope of eternal life. In the BBC drama, when Valjean lay dying, his eyes were fixed on the silver candlesticks given him by the bishop. Grace enabled him to die in peace. "Amazing grace, how sweet the sound, that saved a wretch like me".