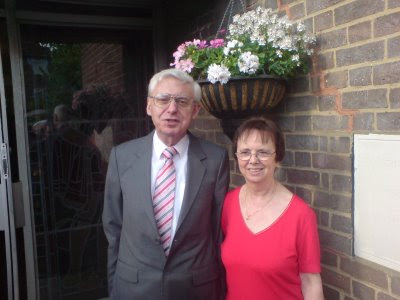 Philip Eveson has now stepped down from the role of Principal of the London Theological Seminary. A special Thanksgiving Service was held to recognise the work of Philip and Jennifer Eveson. Our chairman Irving Steggles emphasised that this was a service of worship. The aim was that God should be glorified in everything that was said and done.

Graham Harrison of Newport spoke on behalf of the faculty with warmth and his customary dry wit. He pointed out that Philip had worked at the Seminary since its inception in 1977, when LTS began to meet in the premises of the Kensit Memorial College. Before that, Mr. Eveson was Principal at Kensit Memorial College, a post he applied for at Mr. Harrison's suggestion. It was Philip Eveson who first spoke to Lloyd-Jones of the possibility of a new seminary being sited at Kensit Memorial College. Graham Harrison cheekily remarked that if Philip had been been a crusty old bachelor, he would of lurched from crisis to crisis. But in God's goodness, he was able to exercise such a long and fruitful ministry at the college due to the constant support of his wife, Jennifer. 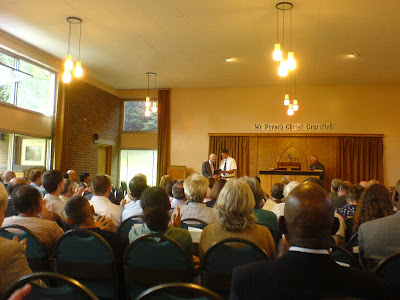 David Earl spoke on behalf of the students. He said that with their openness and accessibility, Philip and Jenny had given LTS, a place of learning, a family atmosphere. For years it was the Evesons' custom to have lunch with the students. I often used to sit near them at lunchtime. I well remember the theological discussions and friendly banter at the meal table. A specially produced book, containing remarks by students past and present was presented to Mr. Eveson.
Philip Eveson seemed deeply touched by all this, and in response spoke gratefully of God's kindness to him during his years at the seminary. He expressed satisfaction that in the Lord's providence, an LTS trained man would be suceeding him as Principal. He also paid fitting tribute to his wife for all her help and support. 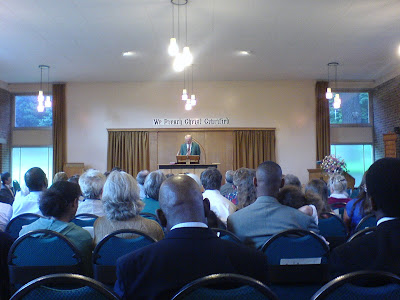 Geoff Thomas preached on Psalm 92:13-15. The tree pictured in the Psalm is an image of the child of God, who has been...

I. Planted in the house of the Lord

Philip, like Geoff was the child of a christian family. They were prayed for boys who were taught the truths of the gospel from a young age.

II. Flourishes in the courts of our God

Philip was nurtured in the piety of Welsh Calvinistic Methodism. He was one of "The Doctor's boys", a generation of men who were steeped in biblical emphases of Calvinistic Methodism. Geoff listed the key characteristics, 1. Christ centeredness. 2. A sense of the seriousness of sin. 3. The importance of holiness without which no one will see the Lord. 4. The inseparability of faith and repentance. Those who believe in Christ also turn from sin. 5. The whole Christ applied to the whole man. Christ the prophet instructs us, Christ the priest saves us by his sacrificial death, Christ the King rules over us. 6. Tensions and struggles with sin in the Christian life. 7. Every Christian should seek full assurance of faith. 8. Those whom God preserves also persevere in godliness.

Geoff spoke of Philip's fruitful ministry at LTS, which would continue through the students he had trained and through his books and writings. The Great Exchange (Day One Publications) had alerted many to the dangers of the new perspective. He had also written with discernment on trends in Evangelical Anglicanism that tend to downplay the work of the Spirit in preaching. Mr. Eveson's commentaries on Genesis and Leviticus (Evangelical Press) will be of lasting value to the church. Philip will serve as Principal Emeritus for one year alongside new Principal Robert Srtivens, before retiring to his beloved Wrexham in North Wales. Geoff promised there would be many opportunities for Philip to preach God's Word in the Principality.

IV. What the tree declares

Geoff brought his message to a close by reflecting on Psalm 92:15

The Service closed with the singing of O Spirit of the living God. This was a fittingly God-centred conclusion to our thanksgiving service, that expressed Philip Eveson's loging for an outpouring of the Spirit upon those who preach the gospel.
Posted by Guy Davies at 2:00 pm

I met Phillip at the Cheltenham Bible Festival where I was able to thank him for his Genesis commentary. Whilst I consult many books, his has been the most suggestive and directive as I have preached through the book of Genesis. He has a welcome knack of drawing out some of the best of Calvin, which is heavy wading!