Through Western Eyes by Robert Letham 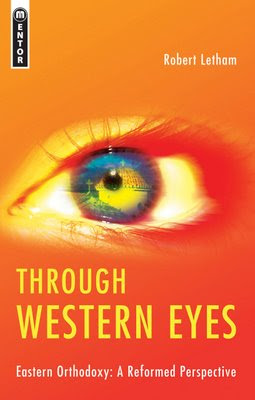 I came back to this post because I've recently bumped into a Greek Orthodox gentleman at work. Thanks for posting this review and highlighting the book.

One question for you, though. You say, "The Lord's Supper is no trip down memory lane, it is an act of communion with the risen Christ who is present at the Table by the Spirit as the faithful eat bread and drink wine together." I've not studied communion, but this view is a little different than my understanding. "Do this in remembrance of me," seems to infer that this sacrament is an act of remembrance. "A trip down memory lane," seems to belittle this approach, leaving me to assume that you hold this view to be lacking. Could you elaborate, or perhaps point me to a good resource? (p.s. the Church I'm at is definitely more Zwingli than Calvin on this point.)

Glad you found the review helpful. The words "The Lord's Supper is no trip down memory lane..." are Letham's not mine. But I agree with the sentiments. Yes, the Lord's Supper is an act of remembrance. But it is far more than that. It is also an act of communion with the risen Christ in the presence of the Spirit (1 Corinthians 10:16 & 17). And it is an anticipation of the great wedding supper of the Lamb - "Until he comes".

I refer you to Calvin's treatment in the Institutes, Book IV:17, and if you can get hold of it 'Union and Communion 1529-1979', the 1979 Westminster Conference papers, including essays on the sacramental teaching of Luther, Zwingli and Calvin. And although I've not read it you might like to try 'The Lord's Supper: Eternal Word in Broken Bread' by Robert Letham (Presbyterian & Reformed, 2001)

Hello, Interesting review. I'm Orthodox, and was just browsing for some info on Palamas and somehow came across this review. I'll have to check out this book, and Letham's other book on the Trinity. I'm glad to see some Reformed folk making efforts to understand Orthodoxy. Unfortunately, simply reading a book will not get you very far. Whereas the Reformation was born in the classrooms of humanist Europe, and, I suppose, can be learnt via the lecture format seemingly favored by Reformed preachers (in my limited experience), Orthodoxy utterly rejects the notion that true theology is ever academic, or even propositional. The true theologian is one who has actually been appeared to by God, Christ, the saints and patriarchs. They speak with first hand knowledge, just as Paul was able to speak with authority after his experience on the road to Damascus. So I doubt very much if reading a book is an adequate way of becoming acquainted with the Church. It somewhat like reading a manual in order to learn how to learn kung fu. You really need to practice, to understand it. I encourage you to visit a monastery, preferably Mount Athos if you can, or your local Orthodox Church.

Some reactions. About petitions to departed saints. Do Reformed people believe that those who repose in Christ simply die? That there is such a thing as a "dead" Christian? In Orthodoxy we never refer to Christians as being dead. Christians cannot die. They have eternal life. We believe that to repose in the body is to be alive and present with the Lord, where the saints continually offer up prayers like incense. I believe the Apocalypse mentions that. Moreover, its a matter of 2000 years of experience, of communing with the saints who often appear to the faithful, to know that the Church triumphant does indeed intercede for the Church militant. To my ear, saying the saints do not pray for us seems as atheistic as saying that God doesn't exist.

About sin. You suggest the Orthodox do not take sin seriously enough. I must confess, I see it the other way entirely. The whole of Orthodox life is a struggle against sin, death and the wiles of the devil and his legion, who have often appeared to the saints, to attack them, etc. Fasting, prayer, ascetic struggle, confession, the guidance of a spiritual father, a life of worship where every day has been given to the Lord in the liturgical calendar, are all means geared to defeat the vileness of sin in our lives so that we may be holy as God is holy, be filled with the Spirit, and become partakers of the divine nature. But isn't it true that the doctrine of justification by faith alone, along with belief in absolute predestination, more or less practically absolves the Reformed Christian from making any ascetic effort at all? It seems I've spoken to many Reformed people who have never even fasted a day in their life, let alone led a life of struggle equal to the dangers posed by sin!

And how odd it is, to knowingly side with something called the "Augustinian tradition" (if such a thing ever existed) especially when Augustine's theology was condemned even by the West at the council of Orange, I believe. True we are dead in sin. But what does that mean? What does it mean to say that when we live and move and have our being in God. When the whole world exists only by his providence. True, we are dead, but perhaps not as you understand it. Remember, Christians are also supposed to be "dead TO sin." But since we are just as capable of doing good, as we are capable of doing evil, I suspect the notion of being "dead" needs to be rethought in Reformed theology.

And lastly, I think there might be a misunderstanding about what is meant by tradition. You suggest that Scripture should stand above tradition. That doesn't make much sense to me. How could it, when Scripture itself is a product of tradition? I mean, how do Reformed people know that the Four Gospels, which are anonymous on their face, were written by Sts Matthew, Mark, Luke and John, except that Orthodox tradition tells you so? How do you know which books comprise the Bible, except by tradition? And do you not follow Paul's command to follow both the oral and written traditions given by the apostles (2 Thess. 2:15), which the Fathers scrupulously passed down to us? Whether God spoke to Moses, or wrote upon the tablets, the Word of God, whether oral or written, is authoritative. And there simply is no reason for thinking the written word takes priority.

Anyways, I'm not sure whether the Reformed celebrate Easter, or at least, celebrate it with the same intensity as Orthodoxy, but I pray the light of Christ's resurrection will shine upon you.

I converted from reformed to Orthodox, so I know a bit about both. While it's nice to see interest in Orthodox Christianity, there are a lot of erroneous statements here. First, there is plenty of room for preaching in Orthodox services. (However, this will always be subordinate to meeting God directly in the Eucharist.)

The comments on Scripture and Tradition are misleading. Tradition cannot trump Scripture - though I must say this attempt to prioritize this above that seems misguided.

I don't see any reason to argue about it, but claiming that a picture of Christ leads to Nestorianism is a, um, something the book ought to have dissuaded you from.

Lastly, Palamite theology isn't quite as universally accepted in Orthodoxy as you are suggesting. One problem I have with these "Westerners-look-at-the-East" books is that they are usually very narrow considerations of Parisian Russian Emigre 20th century theology rather than the Orthodox and Catholic tradition. When they turn to critique they seem to be grappling with a neo-patristic synthesis that at many levels is overly simplistic.

Having said that, I must say the off-handed criticism of Palamas strikes me as disingenuous. Have you read Lossky for example?

The Quakers were not Christians and are not today. They are believers in inner light that of God in every man. Not a Christan doctrine. Thanks for interesting article.