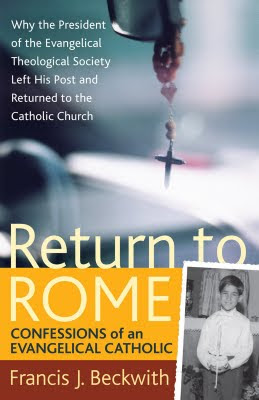 Return to Rome: Confessions of an Evangelical Catholic,
by Francis J. Beckwith, Brazos Press, 2009, 144pp
In 2007 Francis Beckwith, President of the Evangelical Theological Society caused something of a stir when he resigned from office on the grounds that he had returned to the Roman Catholic Church. I say returned to the Roman Catholic Church because Beckwith was raised a Catholic and did not become an Evangelical Christian until his late teens. His disillusionment with post Vatican II Catholicism made him search for spiritual fulfilment among Evangelical Protestants. With touching honesty Beckwith tells the story of his reenchantment with the Roman Catholic Church into which he was baptised and confirmed as a child. Surprisingly, amongst other influences he cites Carl Trueman, Professor of Historical Theology and Church History at Westminster Theological Seminary as a catalyst for his return to Rome (p. 83). He quotes Trueman's review of Is the Reformation Over? - here.
To get to the nub of things, it seems that two substantive doctrinal issues led Beckwith to question his Evangelical Protestant faith and consider reconciling with the Roman Catholic Church. The first was the doctrine of Scripture. The second was justification by faith alone. In this post I will discuss the what Beckwith has to say on sola scriptura.

Sola scriptura
Increasingly Beckwith struggled with the Protestant teaching of sola scriptura, finding the Catholic teaching where God reveals himself through Holy Scripture and the traditions of the Church more appealing. Of course, if Church teaching is a source of continuing revelation alongside Scripture, then it doesn't matter that certain Catholic dogmas can't be found in the Bible. On that basis the primacy of the Pope, purgatory, the Marian doctrines and so on may be accepted simply as the authoritative dogmas of the Church. The fact that they have no evident biblical foundation is besides the point. The Church has infallibly pronounced that these dogmas must be accepted by the faithful and that's that. However, it might be objected that Beckwith has not properly understood what the Reformers meant by sola scriptura. He seems to have had a rather biblicist understanding of the doctrine that excludes the role of the church as reader and teacher of Holy Scripture. By sola scriptura, the Reformers did not mean to separate the Bible from the Church. Rather they insisted that the Holy Spirit speaking in Scripture is the supreme authority in the Church. The Church has ministerial authority to interpret and bear witness to the message of the Bible, but the Church and her traditions remain under the critical authority of God's written Word. The Church may restate the teaching of Scripture using other than biblical language in order to make its message plain, but she cannot add to God's self-revelation in Holy Scripture. Confusion on this point leads Beckwith to charge the Evangelical Theological Society with inconsistency in its doctrinal basis, which reads,

"The Bible alone, and the Bible in its entirety, is the Word of God written and is therefore inerrant in the autographs.
God is a Trinity, Father, Son, and Holy Spirit, each an uncreated person, one in essence, equal in power and glory." (See here).

Beckwith objects that the ETS statement on the Trinity uses words such as "person" and "essence". As he points out this is not the language of the Bible, but of the creedal heritage of the Church. Tacitly, he suggests ETC has recognised that the Church as well as the Bible is a source of revelation about God - the Catholic position. But this is not the case. Evangelical Protestants hold that biblical truth sometimes needs to be stated in extrabiblical language in order to preserve the meaning of Scripture in the face of heretical misunderstandings. That is exactly what happened at Nicaea. When the Church acts in this way she is not supplementing biblical revelation, but preserving the integrity of what has been revealed, 'erecting a fence around the mystery' as Augustine put it. In this vein Beckwith has also misunderstood what the Westminster Confession says about deduction from Scripture. He quotes WCF I:VI
"The whole counsel of God concerning all things necessary for His own glory, man's salvation, faith and life, is either expressly set down in Scripture, or by good and necessary consequence may be deduced from Scripture: unto which nothing at any time is to be added, whether by new revelations of the Spirit, or traditions of men."
Beckwith suggests that in speaking of deduction, the WCF views theology almost as "branch of mathematics". He alleges the Puritans who drew up the confession used Scripture as a repository of truths from which principles could be logically deduced, sidelining the confessional heritage of the Church (p. 80). But this is not the case. The Westminster Confession deliberately incorporates the insights of earlier creedal documents. For all its Puritan distinctives, at heart the confession a work of Catholic theology. Its statement on the Trinity (Chapter II) bears all the hallmarks of Nicean orthodoxy. Its chapter on Christ the Mediator (VIII) freely uses the language of the Definition of Chalcedon. Its doctrine of sin and salvation is positively Augustinian (chapters IX-XVIII).
By not limiting the whole counsel of God to what is expressly set down in Scripture, the Puritan divines were distancing themselves from heretics such as the biblicist Socianians who insisted that biblical truth must be expressed in purely in biblical language. The Church's doctrine of the Trinity in terms of God being a union of three persons in the one divine essence may not be found in Scripture in just such words. But the doctrine of the Trinity may be properly deduced from Scripture as part and parcel of the whole counsel of God. Deduction here is not a case of autonomous human logic, but an exercise in holy reason as the Church under the guidance of the Holy Spirit seeks to faithfully articulate and defend God's self-revelation in Scripture.
Evangelical Protestants in the Reformed tradition certainly do not understand sola scriptura to mean that the interpretation of one believer is just as good as another or that the Bible should be read individualistically apart from the the creedal heritage of the Church. The Church has ministerial authority to expound the word through the teaching and preaching of her pastors. But the Church has no magisterial authority to add to Scripture or to rule infallibly on its interpretation. We do not need the Roman Catholic Magisterium to tell us how to read the Bible. But that does not mean that sola scriptura a recipe for theological anarchy. The Bible is God's clear and present Word to the Church. Its basic message concerning salvation in Christ is clear for all to see, while opinions may differ over the meaning of some difficult texts. However, differences of biblical interpretation are not the sole preserve of Evangelical Protestantism. The Church Fathers did not always agree. Is Beckwith suggesting that the Magisterium has succeeded in eliminating all disagreement on matters of biblical interpretation among contemporary Roman Catholic scholars? It would be hard to substantiate such a claim.
Beckwith's issues with sola scriptura are misplaced. His concerns have more to do with a narrow Fundamentalist biblicism than the historic Reformed teaching on the relationship between Scripture and the Church. In this book Beckwith complains that Evangelicals have often misunderstood the teachings of the Roman Catholic Church. That may well be true and we must work harder to try and understand what each other is saying. But from his critique of sola scriptura, it seems that the former President of the Evangelical Theological Society did not have an accurate grasp of the view of the Bible he thought he was rejecting when he returned to Rome. That is regrettable and maybe it is an indication of the need for the wider Evangelical world to engage in further theological reflection on the doctrine of Scripture that goes beyond "the battle for the Bible". While biblical inerrancy is to be defended a la the ETS basis of faith, there is more to a rounded doctrine of Scripture than fighting for that particular truth. In my view Words of Life by Timothy Ward is a step in the right direction - see review here.
Posted by Guy Davies at 7:09 pm

Robert said...
This comment has been removed by the author.
5:09 am