Why the Word did not become a human person 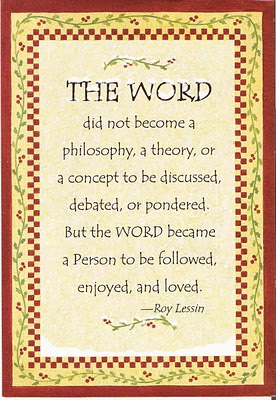 I can understand what the poet Roy Lessin is getting at in the sentiments expressed in this Christmas card. But something's not quite right. The Word did not become a Person when Jesus was born into the world as man. The Word was the second Person of the eternal Trinity. He for ever existed in a loving and personal relationship with both the Father and the Holy Spirit. The idea that the Son of God became a human person is the error of Nestorianism. According to Nestorian doctrine (although Nestorius himself almost certainly did not teach this), the person of the Word entered into union with a human person at the incarnation. But as Cyril of Alexandria pointed out, this construction divides the one Lord Jesus Christ into two personal identities. Nestorianism was condemned as a heresy at the Council of Ephesus in 431 AD. Now, I'm not accusing Roy Lessin of being a Nestorian heretic! I simply quote his poem as an example of how Christians sometimes use well-defined theological terminology in a rather loose way.
Discussion over the precise relationship between the divine and human in Jesus continued to rumble on until the Council of Chalcedon in 451 AD. At that council, the Church declared that best account may be made of the Bible's portrait of Jesus by saying that in the incarnate Son there are two natures, divine and human. So, we may say that the person of the Word became flesh, taking a human nature, but not that the Word became a human person. This one Person with two natures Christology has stood the Church in good stead for centuries.
What then may we say of Jesus' humanity if he did not become a human person? It was suggested that the human nature was strictly speaking impersonal or anhypostasia. But this is problematic and open to misunderstanding in the light of the highly individualised human being described in the Gospel accounts of Jesus' life and ministry. Here is no impersonal automaton. In his humanity, Christ evidently had a distinct psychological make-up. He had his own mind with a unique way of thinking as expressed in his teaching. He had human emotions. Jesus had a human will with the capacity for making meaningful decisions. He had relationships with a wide range of other human beings. The notion of impersonality doesn't quite capture all this. Better to speak of the humanity of Jesus as in-personal or enhyposatos. This term stresses that the humanity of Jesus has no independent existence apart from in union with the person of the Son. The humanity he assumed when conceived by the Holy Spirit in the womb of the virgin Mary was his humanity. It was the Son in his humanity who preached the Sermon on the Mount, cleansed lepers with a touch of his hand, wept at the tomb of Lazarus, and commanded the dead back to life. It was the Son of God in his humanity who gave himself for us on the cross. It was not simply that his human nature died in our place, but that the Son suffered and died for us in his human nature. All that he did as man was an expression of his personal identity as the Son of God.
At the back of this discussion lies the very idea of personhood. In modern-day terms "personality" refers to the set of individualising psychological characteristics that make us what we are as unique human beings. In that sense, Jesus' humanity clearly had "personality". But in the language of theological discourse, "person" refers to God in his threeness as Father, Son and Holy Spirit, while "being" refers to God in his oneness as the one Lord God. In this context, "person" means something like "centre of self-consciousness". The Son is conscious that he is the Son and has an I-Thou relationship with the Father and the Spirit in fullness of God's inter-Trinitarian life.
That is why we cannot say that the Word became a person at the incarnation. At worst it seems to mean that the impersonal Word only became personal at the incarnation. Where does that leave the doctrine of the Trinity? At best we would be suggesting that Christ has two personal identities, so that the divine Son has an I-Thou relationship with his own human nature. That does not accord with what we find in the New Testament, where Jesus is possessed of one unifying self-consciousness. As both God and man he knows that he is the Son. There may be two levels of consciousness - as God the Son he knows all things, while as man he only knows some things. However, there is but one self-consciousness in the Son of God incarnate.
So, the Christmas card is wrong. The Word did not become a person. For us and for our salvation, the person of the Word took a human nature. God became man to bring man back to God. Jesus is and ever will be 'Emmanuel', God with us as one of us.
See here and here for some more attempts at corrective Christmas theology.
Posted by Guy Davies at 2:25 pm

Hmm - interesting. There's a great mystery here, and I recognise we have to be so careful with words. Two questions:

2. AW Pink (in 'The Divine Covenants') speaks of the second person of the Trinity becoming united with the elect man Jesus (in the womb, of course). So - Pink was guilty of Nestorianism, then?

1. Becoming a married man was a change in your relational status, it not did not involve you taking another nature into personal union with yourself. Jesus did not become a human person. At the incarnation he became a divine person with a human nature. The 'becoming' bit has to do with his taking human nature not with becoming a person.

2.From your summary Pink did not say that he second Person of the Trinity became united with a human person. That would have been Nestorian. Jesus was the elect man (Isaiah 42:1). I don't have a problem with Pink's construction so long as it is made clear that the Son became the elect man in the virgin's womb. His humanity had no existence apart from in union with the person of the Son.

I'm not arguing with the point you're trying to make - making, in fact (and I'm not actually arguing at all - just discussing/asking.)

No need to follow this on Guy, unless you want. Happy Christmas

I appreciate your discussion of this point. However, for reasons already given I think the message on the card is quite misleading. Anyway, happy Christmas to you too!