The Word of God did it? 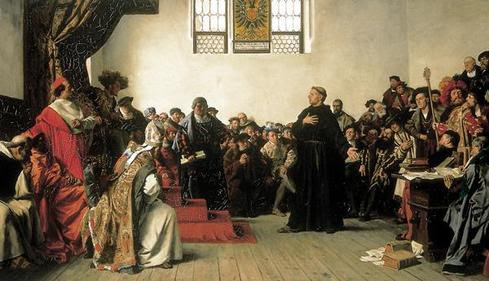 “I opposed indulgences and all papists, but never by force. I simply taught, preached, wrote God’s Word: otherwise I did nothing. And then, while I slept, or drank Wittenberg beer with my Philip of Amsdorf, the Word so greatly weakened the papacy that never a prince or emperor did such damage to it. I did nothing: the Word did it all. Had I wanted to start trouble . . . I could have started such a little game at Worms that even the emperor wouldn’t have been safe. But what would it have been? A mug’s game. I did nothing: I left it to the Word." Martin Luther

According to Stuart Olyott, writing in the December 2009 edition of The Banner of Truth magazine, Luther got it wrong in the statement quoted above - and we need to know why. I am in broad sympathy with the drift of Olyott's article. He is right to say that the Word alone can accomplish nothing and that the power of the Spirit is needed to make the Word effective. But I don't believe that Luther was incorrect to speak as he did. The first thing to remember is that what we have here is not a piece of dogmatic theology where Luther was attempting to capture all the nuances of biblical teaching in one statement. It was a quickfire response to someone who asked him how the Reformation happened. We don't need to include everything the Bible teaches on a subject in order to say something meaningful and true. To suggest that we do is to go beyond the pattern of Scripture itself.

Luther's words are comparable with what Luke says in Acts where he attributes the growth of the church to the Word of God (Acts 6:7, 12:24, 19:20). Now, Luke sets such statements in the context of the outpouring of the Spirit on the Day of Pentecost (Acts 1:5-8, 2:1-4). He makes it clear that preachers need to be filled with the Spirit to empower them to proclaim the word boldly and effectively, (Acts 4:31). But he did not feel the need to qualify what he said in Acts 6:7 in order to bear this out by saying something like, "Then the word of God spread by the power of the Holy Spirit and the number of the disciples were multiplied greatly". Where the agency of the Word alone is mentioned in Scripture it is assumed but not always stated that it was the Holy Spirit who made the word effective in the salvation of sinners. Often Scripture explicitly links Word and Spirit together (1 Corinthians 2:1-5, 1 Thessalonians 1:5), but not in every case. This is analogous to Calvin's point that whenever Scripture attributes salvation solely to the cross of Jesus, his resurrection is always assumed and when salvation is attributed solely to his resurrection, the cross is always assumed.

Luther knew very well that the Reformation was not the product of the bare Word of God. He would have agreed entirely with Olyott that, "the Word, on its own, did nothing." The Reformer taught clearly that the Holy Spirit enables us to savingly believe the Word. In his Small Catechism he asks,

Why do you need the Holy Spirit to begin and sustain this faith in you?

By nature I am spiritually blind, dead, and an enemy of God, as the Scriptures teach; therefore, I cannot by my own reason or strength believe in Jesus Christ, my Lord, or come to Him.

What has the Holy Spirit done to bring you to faith?

When we bear this in mind, Luther wasn't wrong to say, "I did nothing: I left it to the Word", unless we are willing to charge Luke and other biblical writers with a similar error. In a future post I hope to reflect on what Olyott had to say in his article concerning "mediate regeneration" .

If Luther/Calvin/we confess 'sola Scriptura', does it not automatically include and imply the whole content of Scripture and what it teaches, i.e.'Word AND Spirit' (package deal) ?

When we learned Greek, our prof taught us 'synecdogee' (spelling?), which means one thing stand for or are taken for the whole ('Ephraim' for the whole of Israel).

Agreed. When Luke attributed the growth of the church to the word in Acts, he may only have mentioned the word, but he meant the word as made effective by the Spirit given at Pentecost.