PTS evangelistic leaflet: Who is Jesus?

The Protestant Truth Society has produced a couple of evangelistic leaflets written by yours truly. A number of churches use the leaflets in their door-to-door, open air and literature distribution activities. Here is an excerpt from Who is Jesus? a 10 page leaflet priced 15p, with the possibility of a discounted cost for bulk orders: 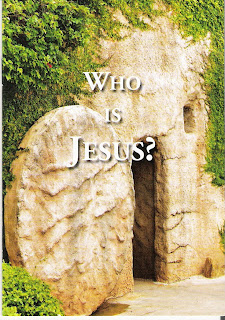 I suppose that most people would agree that Jesus Christ is the most famous and influential person in history. He lived on our planet for only 33 years, yet countless millions of people have been and are fascinated by him. The faith he founded - Christianity - has spread throughout the earth and is still changing people’s lives today.
But who is this man, who was born about 2000 years ago? He has been the subject of whole libraries full of books, yet his mysterious glory defies human analysis. Artists have been moved to honour him, but his greatness cannot be captured on canvas. Composers have written some of their greatest masterpieces in homage to Jesus but his majesty demands music the like of which we can never imagine. Poets have ransacked the whole range of human language yet their words have failed to fully express the elusive splendour of Jesus of Nazareth.
So, who is this Jesus? What can we know of a man who lived so long ago? Records of Jesus and his early followers exist in ancient Jewish and Roman texts. But the fullest and most accurate depiction of the life, teaching, death and resurrection of Jesus is found in the Bible.
Unto us a Child is Born
The origins of Jesus’ human life are supernatural. He was born of a virgin. Mary, his mother was told by an angel:
"The Holy Spirit will come upon you and the power of the Highest will overshadow you; therefore, that Holy One who is to be born will be called the Son of God." (Luke 1:35)
But Jesus’ conception by the Holy Spirit in the womb of his mother was not the beginning of his existence. As the Son of God, he eternally existed eternally with God. John opens his gospel with these thought provoking words about Jesus as the Word of God:
"In the beginning was the Word and the Word was with God and the Word was God." (John 1:1)
The Bible teaches that the Son of God, equal to God in power and glory became man.
"And the Word became flesh and dwelt among us, and we beheld his glory, the glory as of the only begotten of the Father, full of grace and truth." (John 1:14)
That is why, when he was born people came to worship him. Wise men from the East sought him out and offered him their costly gifts. Poor shepherds visited the Babe "and returned glorifying and praising God for all the things that they had heard and seen” (Luke 2:20).
Jesus entered fully into our humanity. He became a real flesh and blood human being. As the old Christmas Carol put it "tears and smiles like us he knew”. In Jesus, God knows what it is to be human.
To request samples or place an order contact the PTS Christian Bookshop.
Posted by Guy Davies at 8:00 am