A Tale of Two Saturdays 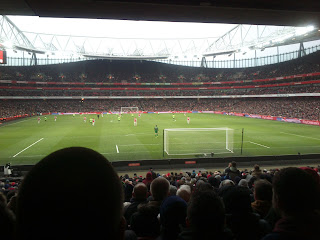 Two Satudays running I've found myself in London, but for two very different reasons. On Saturday 23rd February I took my son to the Emirates Stadium to watch Arsenal v. Aston Villa as an 18th birthday treat. His birthday was back in January, but better late than never. It was a bitterly cold day, but we enjoyed the game, which Arsenal won 2-1. I'm a rugby rather than football fan really and didn't know what I'd make of it all, but it was a great boys day out. I managed to keep a weather eye on the progress of the Italy v. Wales Six Nations game on my phone. We watched the second half of the England v. France match in a bar/restaurant on Waterloo Station while waiting for the train home. The piping hot beef stew helped us to thaw out.

Last Saturday the wife and I, together with friends from local churches went to the British Museum for a Day One guided tour with Clive Anderson, joint-author of Through the British Museum - with the Bible (Day One). It was a early start for a Saturday (usually my day off). We jumped on the coach at 7am in order to arrive at the museum at 10am in time for the tour's 10.45am kick off. I'd not met Clive before and wasn't sure quite what to expect, but he was an engaging and well informed guide. The diminutive chap claimed that both Samson and the apostle Paul probably looked a bit like him. What archaeological evidence he has for that I don't know, but there we are. 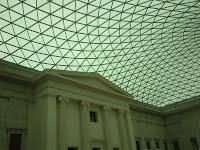 I'd been taken around the museum by my parents when a child and a guided tour had been laid on for students when I was at the London Theological Seminary, but I'd forgotten much of what is on display. Seeing the mummy with a tuft of ginger hair jogged a childhood memory. The sight of the hair on the long-dead man really spooked me as a kid. I'd not seen a 'real life' dead body before. It's still a macabre sight as the corpse bears its silent witness to human mortality. The replica of the Assyrian city gates were about the only thing I could recollect from the LTS tour. Strange that. Huge as they are, the doors are hardly the most impressive thing about the place. 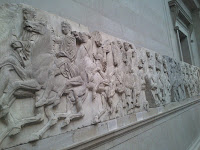 With memories of earlier visits fading, most of what I saw in the museum was fresh to me. Clive Anderson's lively commentary gave added interest to the exhibits we paused to look at as our party made its way though the vast museum. I'm not even going to try and give a blow-by-blow account all that we saw. If you're that interested, book your place on a Day One British Museum Tour. But my highlights included the magnificently exhibited Parthenon Sculptures (no Greece, you can't have 'em back), an assortment of beautiful classical statuary, the Rosetta Stone, King Artaxerxes' wine bowl, possibly kept in plentiful supply by Nehemiah, artefacts from an ancient British villa replete with Christian symbolism and Oliver Cromwell's suitably modest Puritan pocket watch. Maybe the Banner of Truth could produce replicas of the last item to compliment their 'Pocket Puritan' titles. Oh, and it was good to see old ginger again. Well, not really. He didn't look any better.

On a more reflective note, walking amongst the ruins of once great empires and civilisations put me in mind of Rudyard Kipling's poem, Recessional, a verse of which says,

Far-called our navies melt away—On dune and headland sinks the fire—Lo, all our pomp of yesterdayIs one with Nineveh and Tyre!Judge of the Nations, spare us yet,
Lest we forget—lest we forget!
Posted by Guy Davies at 8:18 am