Dynasty: The Rise and Fall of the House of Caesar by Tom Holland 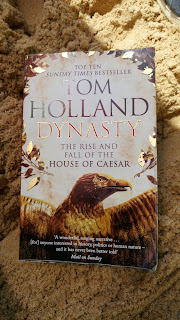 More summer holiday reading. Still on the theme of our Rome/Venice half term break.

Ever read the second half of Romans 1 and thought, 'Hey, Paul, that's laying it on a bit strong'? I mean, all that stuff about idolatry, sexual immorality, hatred, murder and the like. Surely those old Romans weren't that bad? Worse, actually. The apostle was sparing his readers' blushes. Holland doesn't.

In his latest historical blockbuster the historian tells the tale of the House of Caesar. Put simply, they weren't very nice people. What Senneca said regarding the worst of them, Caligula, might well be applied to the rest in some measure, 'Nature produced him...to demonstrate just how far unlimited vice can go when combined with unlimited power.'

Holland unfolds the story of Augustus' dynasty with his customary flair for writing a well researched historical account that is borne along by a surging narrative flow. Full of detail and drama.

By his victory at the decisive battle of Philippi, Gaius Octavius brought an end to the civil wars that followed the assassination of Julius Caesar. He then  claimed for himself the  ultimate prize in Rome. While Augustus (as Gaius became) paid lip service to the traditions of the Republic, he accrued to himself the powers of an absolute monarch. Anyone who stood in his way was eliminated. Plotters and would-be rivals were ruthlessly dispatched. Those who succeeded him; Tiberius, Caligula, Claudius and Nero followed suit.

You think the jostling for position among leading Tories after the Brexit vote was sharp elbowed; Gove and Johnson and all that? Playground fisticuffs compared with the deadly goings on in the House of Caesar.

Holland's work could be read as a meditation on human nature. An extended commentary on the saying, 'Power corrupts, absolute power corrupts absolutely.' That certainly rings true for the Caesars. Not even their nearest and dearest were spared. Brothers had their sisters murdered, uncles their nephews and nieces. In the case of Nero, he had his own mother bumped off and in a fit of temper battered his pregnant wife, Poppaea to death. To say nothing of how they treated their enemies.

Ovid, for ever wanting to push the boundaries of taste and decency said, 'We always want what we're not allowed'. A profound commentary on human nature. Augustus passed a law against adultery, and yet demanded that his sexual appetites be sated by a steady supply of nubile young women. Tiberius posed as an upstanding embodiment of old Roman virtue, yet spent his last days living out his depraved sexual fantasies. Caligula openly reveled in excess of all kinds. Nero tried to replace the wife he murdered with a male eunuch.

Ovid was right. In his Letter to the Romans Paul wrote, "Now the law came in to increase the trespass" (Romans 5:20). The divine 'thou shalt not' provokes the response 'why shouldn't I?' Paul testified to own experience of this, "Yet if it had not been for the law, I would not have known sin. For I would not have known what it is to covet if the law had not said, 'You shall not covet.'” (Romans 7:7).

But hang on a minute. Augustus and co didn't exactly have the Ten Commandments inscribed on their villa walls. How can they be said to be deliberately transgressing the law? A clue may be found in Ovid's statement cited above. His 'allowed' suggests moral force. Paul in Romans 1:18-32 argues that pagans knew right from wrong, and yet deliberately chose what was wrong; idols over God, unrighteousness over righteousness, what was unnatural over the natural etc.

The apostle elaborates in Romans 2:12-16. God had 'by nature' written the law on the hearts of Gentiles and their consciences bore witness to that law, accusing or excusing them accordingly. The problem wasn't that Ovid and Caligula didn't know any better when it came to immoral conduct. Rather, the very prohibitions of the 'light of nature' provoked them to want what they were not allowed. That is part and parcel of the perversity of human sinfulness. The history of the House of Caesar, indeed all human history bears witness to that sad fact.

That is why placing too much power into the hands of one person is always a recipe for disaster. Political systems need checks and balances in order to rein in the worst excesses of human nature. The period of the Roman Republic was hardly a Golden Age of love and peace, but at least the system that Augustine and his line supplanted had some checks and balances.

Dynasty is great background reading for the New Testament period. Holland references Jesus and his teaching and describes the persecution of Christians under Nero. The text is sprinkled with Bible references. Spookily, Holland brings his account to a conclusion with a nod to Revelations 17, which sprung to mind when reading Peter Ackroyd's Venice.


This is not a book for the faint hearted. Sometimes you feel like you are wading through blood and guts. Holland doesn't flinch at detailing the seamier side of Roman life either. A kind of 'Horrible History' for grown-ups, 'The Dreadful Dynasty'?

What made Augustus and his line so dreadful was the rampant power of human sinfulness let loose. The Caesars styled themselves as lords of their people and sons of a god. They attained their elevated status by ruthlessly grasping for power and keeping hold of it at all costs. Paul visited Philippi, site of the famous battle and planted a church there. Roman soldiers were given the right to settle in the city, which became a colony of Rome. Members of the church were both citizens of Rome and citizens of heaven. As citizens of heaven they acknowledged another Son of God, Lord and Saviour, Jesus Christ, Philippians 3:20-21. Jesus showed an altogether different attitude to power and prestige to that of the Caesars, Phil 2:5-11. He who was in the form of God took the form of a slave to die for his people. Therefore God exalted him to the highest place of honour in the universe.

The apostle wrote to the believers in Philippi that they were to, 'Let this mind be in you which was also in Christ Jesus'. They were to eschew selfish ambition and seek honour through humility and service, Philippians 2:3-4. For the Caesars, especially Caligula and Nero, overweening pride came before a terrible fall. The Christian gospel turns the world upside down by teaching that down is the only way up. As Jesus taught, "The meek shall inherit the earth." (Matthew 5:5).

As he wrote his letter to the Romans, Paul sensed the vulnerability of the Christian community under Nero. What chance did they have against the brutal princeps of Rome? Yet he assured them they they were held in the grip of something more powerful than the spite of the Emperor. Nero might label them as enemies of mankind and have them thrown to the lions, doused in pitch and set alight, but nothing would be able to "separate them from the love of God which is in Christ Jesus our Lord." (Romans 8:35-39).

The House that Caesar built lies in bloodsoaked ruins. Its legions have long perished. Its monstrous deeds stand condemned by history. The kingdom of the wolf is no more. The Lamb is in the midst of the throne.
Posted by Guy Davies at 10:28 pm