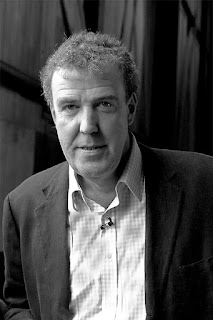 No, this is not an autobiographical article. It was prompted by reading a thoughtful piece in the Sunday Times the other week, Jeremy Clarkson on growing old and his fear of death. He's 'only' 62, which is older than me, but not exactly what you might call geriatric. That’s not how it seems for Clarkson, though. He is definitely feeling his age. And then some. The writer laments the effects of the passing of time. Knees need replacing and ears boosting with hearing aids. Eyes grow dim and you can’t remember where you put your spectacles. ‘We are all dead men walking’, he laments. Faced with increasing weakness of body and mind, the writer is not cheered with the hope that at death he will be going to a better place, “I know I’m going to be in a hole where I shall rot. And I shall be there for ever”. More a case of growing old grumpily than gracefully.

Jeremy Clarkson has had a hugely successful career as a TV presenter, journalist and author. Millions tuned in to watch him, Richard Hammond and James May on BBC’s Top Gear, before the team made the move to Grand Tour on Amazon Prime. The presenter’s Clarkson’s Farm was also a big hit, with Season 2 in the offing. Most weeks Clarkson has not one, but two columns in the Sunday Times. Yet his movingly honest reflections on the ravages of time put me in mind of a sobering passage in the Bible's book of Ecclesiastes. With unblinking realism the author reviews his many life achievements and concludes, “I considered all that my hands had done and the toil I had expended in doing it, and behold, all was vanity and a striving after wind, and there was nothing to be gained under the sun.”

Clarkson is grappling with the fact that death deprives us of our achievements and stops us fulfilling our dreams. But is nothing left when we reach the autumn of our days than to rage against the dying of the light? The Christian faith puts a different perspective on things. Paul writes, “So we do not lose heart. Though our outer self is wasting away, our inner self is being renewed day by day.” The believer’s inner life is being rejuvenated by the power of God’s grace, even as their bodies are wearing out with age. The Christian has hope in the face of death, that although their bodies will rot in a hole, their spirits will be present with the Lord in heaven. Beyond that, we look for the resurrection of the body and the life of the world to come. By the grace of God it is possible to grow old gracefully, with hearts full of hope rather than despair.

*For the May edition of various local parish magazines

I think the expression is ‘grow old graciously’……..(as opposed to ‘like a ballet dancer’🙂

Nice to happen upon your material in the course of browsing George Herbert. The internet is not all bad……

I think 'grow old gracefully' is the more common saying. But let's try to be gracious and not fall out over it.