'Engaging with Barth' by David Gibson and Daniel Strange (eds.) 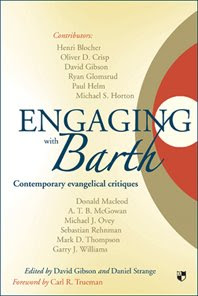 Thanks for the review. I'd recommend checking-out (if you haven't already) Karl Barth and Evangelical Theology, ed. Sung Wook Chung, namely the chapter by Kevin Vanhoozer on Barth's doctrine of scripture. It is a truly excellent piece. I won't attempt to lay out Vanhoozer's argument, but, basically, his thesis is that the contention that the Bible "becomes" revelation for Barth (vs. it "is" for Evangelicals) is actually not so different from the Evangelical account, especially if we look to CD 1/2 and the way Barth uses the Bible in his dogmatics.

If you click on the Karl Barth label below the post and scroll down a bit, you'll find my review of the book you mention with some comments on Vanhoozer's chapter.

Thanks for this Guy. Helpful and balanced as always.

When it comes to Barth I've barely reached the marina, but you've inspired me to read this Reformed response to his theology.

I recently bought Joseph Mangina's 'Barth: Theologian of Christian Witness', and am hoping to post a review of it pretty soon.