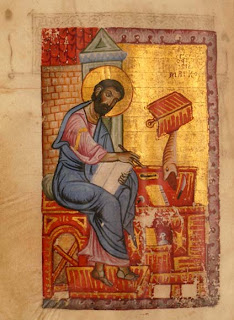 [See here for Part 1]
4. Jesus is mocked by his enemies

In films like The Passion of Christ, the sheer physical brutality of crucifixion is brought to the fore. Mark, however, places that in the background. However, Mark is very restrained when it comes to the gore factor. He simply says "and they crucified him" (15:24).Mark draws our attention not to the wounds of Jesus but to the words of his enemies. He goes into great detail to record the taunts and verbal abuse that Jesus suffered (15:29-32, 35). Why does he do this? Because this too is a sign that Jesus is dying under God's judgement. Consider Deut 28:37. Also, Psalm 89:38-42 (in context this is about God's king from David's line):
"You have cast off and rejected;
you are full of wrath against your anointed.
You have renounced the covenant with your servant;
you have defiled his crown in the dust.
You have breached all his walls;
you have laid his strongholds in ruins.
All who pass by plunder him;
he has become the scorn of his neighbours.
You have exalted the right hand of his foes;
you have made all his enemies rejoice."
In Psalm 89 being scorned by his enemies was a sign that God's king was under God's judgement for his sins. And here in Mark 15, King Jesus is scorned by his enemies. The King of the Jews is bearing God's judgement as a substitute for sinners.
5. Jesus is enveloped in darkness

While on the cross, Jesus was plunged into darkness for three hours, Mark 15:33. This recalls the plague of darkness that fell upon Egypt prior to the Exodus. This too was what God threatened Israel with in Deut. 28:29 "and you shall grope at noonday, as the blind grope in darkness." Amos also warned of this sign of judgement (Amos 8:9):
"And on that day," declares the Lord GOD,
"I will make the sun go down at noon
and darken the earth in broad daylight."
Jesus himself speaks of hell as “outer darkness”, a place devoid of the light of God’s presence. As Christ hung on the cross, the very elements spoke of the reality of God's judgement.

6. Jesus is forsaken by God

Now we come to the words that Jesus speaks in Mark 15:34:
And at the ninth hour Jesus cried with a loud voice, "Eloi, Eloi, lema sabachthani?" which means, "My God, my God, why have you forsaken me?"
This is a great mystery. The beloved Son abandoned by his Father. What is going on here? We have to remember that Jesus was the Son of God in the flesh. He was true God and true man. In his human consciousness he had always been aware of the fact that he was the Son of God (Luke 2). This was reinforced by the Father’s words at his baptism and transfiguration. Jesus delighted in the Father’s presence and approval – (John 8:29). But at the cross the Son was made sin. In his humanity, he bore the weight of our transgressions. When he most needed a word of reassurance from the Father, all he could sense was God’s holy displeasure against sin. Poignantly, Jesus cried out, “My God, my God why have you forsaken me?” [Emphasis added]. He felt forsaken by God because he was forsaken by God. “He gave him up for us all” (Romans 8:32). The Father abandoned his Son to the horrors of the outer darkness. The Son was bereft of all comfort. He was no longer cheered by a sense of the Father’s loving approval. The Father treated him not as Son but as sin. He poured out upon Jesus all the wrath and judgement that is due to us as sinners. The ever blessed Son of God was made a curse for us, "suffering in his soul the terrible torments of a condemned and forsaken man". (John Calvin)
This does not mean that there was a rupture in the Trinity. If the Father gave the Son to the horrors of the cross, then it is also true to say that the Son loved us and gave himself for us. He offered himself to God by the eternal Spirit. Rabbi Duncan said, “Dying on the cross forsaken by his Father…it was damnation and damnation taken lovingly.” It is perhaps unhelpful to speak as do some theologians of God being forsaken by God at Calvary. It is more true to say that the Father forsook his Son as the Son in his humanity died for our sin. We must never forget that the Father loved the Son even as he forsook him. Perhaps he never loved him more, (John 10:17), but still he left his Son derelict and abandoned for us. That is the wonder of penal substitution. Mark 15 tells us that Jesus' passion was for us.
7. Jesus’ identity as the Son of God is disclosed as he bears our sin

We have the remarkable words of the centurion, "Truly this man was the Son of God" (15:39). This is what we are told about the identity of Jesus from the outset of this Gospel - Mark 1:1. It is the fact that in his Son, God has taken our sins upon himself that gives Jesus' sufferings their infinite atoning value. In my place condemned HE stood. Hallelujah, what a Saviour!
Part 1 was published yesterday. These articles originated in some notes for a pre-Easter Bible study inspired by this post by Martin Downes.
Posted by Guy Davies at 2:30 pm