The Preaching of Jonathan Edwards by John Carrick 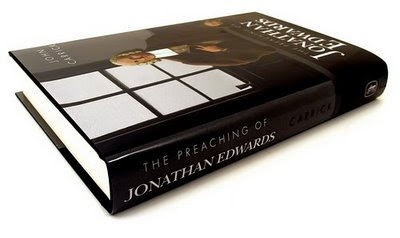 The Preaching of Jonathan Edwards by John Carrick,
Banner of Truth Trust, 2008, 465pp,
In recent years there has been a revival of interest in Jonathan Edwards, the New England preacher-theologian. For many a long year his great treatises lay neglected. The Age of the Enlightenment had little time for a hell-fire preacher who taught that mankind is enslaved to sin. But the evils of the 20th century made people think again. Perhaps Edwards has something important to say to the modern condition? Academics like Perry Miller saw Edwards as an intellectual giant and gave fresh attention to his more philosophical writings. The advent of so-called neo-orthodox theology, associated with Karl Barth also helped to create a climate that was more sympathetic to Edwards' God-centered concerns. In the wake of Word War I, Barth became disillusioned with the easy optimism of Liberal theology. In his commentary on the Epistle to the Romans, he exposed the terrible power of sin and and demanded that we let God be God. But perhaps it was the resurgence of the Reformed faith in the 20th century, associated with the ministry of Dr. Martyn Lloyd-Jones, that has helped to stimulate greatest interest in Jonathan Edwards. Lloyd-Jones was a great champion of Edwards’ theology and recommended his writings to all who would listen. More recently, John Piper has attempted to popularise the preacher-theologian's 'God entranced vision of all things.' All these factors have led to an increasing recognition of the value of the theology of the Jonathan Edwards. But relatively little work has been done on the preaching of the New England divine. This is a great pity because Edwards saw himself first and foremost as a preacher of God's Word. John Carrick has helped to rectify that lacuna with this in-depth study of Jonathan Edwards’ preaching.
Carrick focuses first and foremost on the content of Edwards’ sermons. He was a God-centred preacher, who proclaimed the glory of God in mercy and judgement. There was a winsome Christ-centeredness to his ministry, as he preached Jesus Christ in all his wonderful meekness and majesty. Edwards was no hyper-Calvinist. He believed strongly in the sovereignty of God and he also offered Christ freely to all men. He strongly urged his hearers to seek salvation in Christ. Both here and throughout the book, Carrick quotes satisfying chunks from Edwards' sermons to illustrate his point.
Edwards was an applicatory preacher. He always sought to apply the exposition and doctrine of his text to his hearers. He urged them to examine themselves in the light of Scripture and to follow biblical examples of good Christian conduct. The samples of Edwards' preaching given in the text show how the preacher ministered the Word with searching power. I often found myself challenged, convicted and encouraged as Edwards, though dead continues to speak through his sermons.
The New England preacher rejected the highly polished sermonic style that was becoming fashionable in his day. He adopted a studied plainness in the pulpit. But that does not mean that he neglected to develop a gripping and compelling way of preaching. Carrick analyses the major elements of Edwards’ homiletical arsenal. His sermons had arresting introductions and powerful conclusions. He used vivid illustrations and telling imagery. He would repeat for the sake of emphasis and eloquently exclaim on the glories of the gospel or the wickedness of sin.
It is sometimes thought that Jonathan Edwards was a manuscript preacher, who read his sermons in full. But Carrick challenges this, drawing attention to new research on the preacher’s sermons. Edwards’ notes contain headings and prompts as well as blocks of fully written out text, suggesting that he extemporised at some points in his preaching. The editor of the Yale editior of Edwards' sermons suggests that his tendency to employ a more extemporary method of speaking was due to his increasing disillusionment with the church at Northampton. He just couldn't be bothered to write full sermon manuscripts any longer. But as Carrick shows, this is not borne out by the facts. The preacher's move towards extemporary preaching was a sign of development and maturation, not deterioration.

Jonathan Edwards was, of course mightily used of God in the Great Awakening. He knew very well that it is the Holy Spirit who empowers preaching and makes it effective. Carrick devotes a helpful chapter to the Spirit of God in preaching. He concludes with some wise and cautionary words on how contemporary preachers may best follow Edwards’ example. The preacher would spend thirteen house a day in the study. While his people were welcome to visit him at home, he tended to neglect pastoral visitation. This had the effect of distancing Edwards from his congregation. His perceived remoteness did him no good when he faced difficulties with the church he pastored in Northampton. Although the church had experienced two seasons of revival under his ministry, he was ultimately dismissed my the majority of his people. It is undoubtedly a good thing for Pastors to study theology, but not to the extent that we fail to visit our people in their own homes.
Carrick draws on the life and times of Jonathan Edwards to set his preaching in its historical context. He pays special attention to some of the preacher's most famous sermons such as "Sinners in the hands of an angry God" and his series on 1 Corinthians 13, "Charity and its fruits". He gives us examples of Edwards' early sermons preached in New York, messages delivered in the Great Awakening at Northampton, and his preaching during the Stockbridge years. The author is evidently on familiar terms with the Edwards' published sermons and interacts well with the secondary literature. As Carrick rightly says, the New England preacher-theologian was a "supernova", whose preaching still has the power to enlighten and bless 250 years after his death. I warmly recommend this excellent study to all who have an interest in preaching the Word of God.
An edited version of this review will appear in a forthcoming edition of Protestant Truth Magazine.
Posted by Guy Davies at 9:07 am

Thanks for the preview...
Great Blog.

This will be on my wishlist,(close to the top)Thanks for the review.