Blogging in the name of the Lord: Mark Jones

This is the sixth in our series of interviews with Christian bloggers. In the hot seat today is... 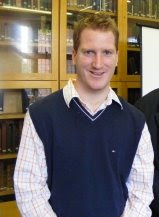 GD: Hello Mark Jones, and welcome to Exiled Preacher. Please tell us a little about yourself.

Only one more Blogging in the name of the Lord interview to go in this set. Who will grace the hot seat for the series grand finale? You'll have to wait and see....
Posted by Guy Davies at 9:26 am

Email ThisBlogThis!Share to TwitterShare to FacebookShare to Pinterest
Labels: blogging, Blogging in the name of the Lord series 4, interviews, Puritanism, Thomas Goodwin

Great interview -- great series! Thanks so much for these!

Thanks for your encouraging comments!

I've just clicked through from I'm-not-sure-where (although I think i might have dropped by before some other time?)

Just to say this was extremely interesting - especially the bit about Goodwin's views on assurance. I've read (ie worked my way very slowly through!) a couple of things by Goodwin and found him very helpful. In fact I owe him a huge debt for at least some sections of 'Justifying Faith'. That's only from a personal, layman's point of view though, not with a view to any serious theological analysis, so this little insight is very interesting. Maybe I should start reading the thomasgoodwin blog :)

Did you see the post below this one, on Goodwin's Perspective on assurance? I link to it in this question in the interview:

GD: Do you accept Goodwin's view that the witness of the Spirit is the highest form of assurance, over and above faith in the promises and the evidence of grace in the heart (see here: http://exiledpreacher.blogspot.com/2008/10/thomas-goodwins-perspective-on.html )

I had a look at it and I think I agreed with it, but can I plead my ignorance and ask what exactly was Calvin's view and how it differed? Surely it wasn't a question of the reality of the witness of the Holy Spirit, so maybe it was something to do with the relative prominence or role of his witness? (sorry if i've picked something up wrong...)

(and no worries if that can't be answered by instant reply :-) )