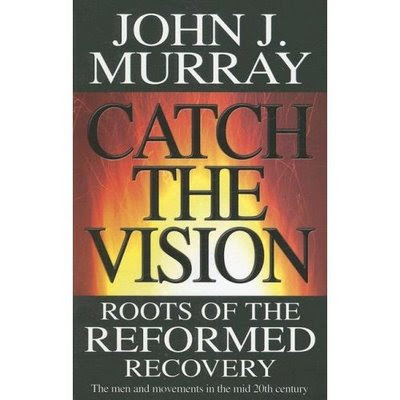 Thankyou for your review, I read the book just after Christmas and praise God for that revival of interest in reformed things post world war 2. I agree things do seem to have stunted after the seventies, to such an extent where personally I think we are in trouble ... in the next 15 years how many reformed / conservative evangelical churches are going to shut ?

I think Murray missed a no of things in his diagnosis of why things stunted, I'd be interested to hear what you think went wrong ...

O that the Lord would stir us and we would see a fresh revival in interest in Reformed things.

PS if I seem a bit gloomy, I live in Birmingham, without a reformed church in the city limits (there are a few sympathetc pastors) and probably the only people who know the 5 points and the 5 solas (outside of a few score (in my estimation)) are probably non Christian theology students at the university.

No need to encourage to a Welshman for being gloomy.

Yes, Murray could have been a little more incisive on why the movement seems to be floundering at the moment.

With regard to what I think may be wrong with Reformed Christianity in the UK, have a look at this older post:

(You'll have to copy n' paste the URL into your browser).

I went to the link and I agree. Your top point is vital (more conversions) - none of the the men mentioned in Catch the Vision were evangelists (Lloyd Jones, may have been to a point ???, but that is not what he is known for and his legacy to the churches has not been evangelistic zeal).

They also have come from a fairly narrow group socially and in line never really sought to reach much beyond this (they continued the over emphasis on student outreach in our circles, which whilst UCCF et al do a great work - you would think that everyone in the UK has a degree - but that is another subject ..)

I have a theory that as reformed Christians, we have been far to introspective in our outreach and (like most of conservative evangelicalism) are happy with transfer growth and student work in our churches.

The era when the revival of reformed things in the UK occurred, was also the era of when in living memory (probably the time when the Huguenots fled France, may beat this ??) of greatest opportunity for church growth in the UK, I am referring to the Carribean immigration to the UK and we blew it. It is so insignificant to reformed historians, I have seen no mention of it in any of the histories and biographies of the time and I have tried to read all I can.

The interesting thing now is maybe we will in many places (like my city) have the opportunity to start again, and in the grace of God, live out the the gospel of grace and the great commission together.

And here to me is the most encouraging thing about the young restless and reformed book, the growth of interest in reformed things among African Americans. In their history they have an 'almost' failsafe apologetic against reformed theology ... 'your theologians backed slavery'. And to our shame many did .. but God in His grace is bringing African Americans to the doctrines of grace ... so that the only time I have heard any reformed theology in any media (outside of our own) in Birmingham was in a rap record (by a reformed African American)on a local radio station. That gives me hope in the gloom that God could move and give a new and more broadly based love of the gospel of redeeming grace.