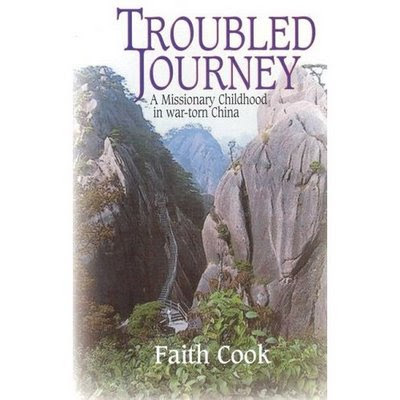 Troubled Journey: A Missionary Childhood in war-torn China
by Faith Cook, Banner of Truth Trust, 2004, 118pp.
In this book Faith Cook tells the story of her experiences as a child of Christian missionaries in the turbulent years surrounding Word War II. Her parents, Stanley and Norah Rowe worked with the China Inland Mission. Together with many earnest Christians of their time, they believed that their missionary calling had to come before anything else. This meant that their children had to suffer living in sub-standard conditions without adequate healthcare. Family life was also disrupted when the children were sent away for their education. Faith had an older brother, Christopher and two younger brothers, Godfrey and Philip. Godfrey died of dysentery while still a baby in Zhongwei, Stalney and Norah's mission base.
Faith and her siblings had to cope with long and sometimes painful periods away from the family home while being educated in boarding schools. When the Japanese invaded China in 1944, children from the Mission School were evacuated to Kalimpong, India. Life was harsh in the makeshift mountain school. Petty childhood misdemeanors met with swift and severe punishment. The family was reunited after the war. But they were forced to flee from China in 1950 when the Communist Party expelled foreign missionaries. For some time the Rowe's lived together in Cliftonville, near Margate in England. The boys attended local schools, but Faith was sent to Clarendon School in North Wales. Here she was able to catch up with her studies and enjoy the attention of the godly and caring members of staff. But while Faith was away in Clarendon, tragedy struck at home. Her younger brother Philip was killed in a road accident. As the family were coming to terms with this terrible loss, Stanley and Norah once again felt the pull of the mission field. They headed off to evangelise Chinese people who had fled to Malaysia to escape from the Communists.
We might think that missionary parents like Stanley and Norah were extraordinarily insensitive and unfeeling towards their offspring. But it seems that they felt the periods of separation from their children very keenly. They believed that it was their Christian duty to make heroic sacrifices for the sake of the Gospel. Children were regarded as "little Isaacs", who were sacrificially offered to the Lord. They seem to have forgotten that the Lord told Abraham to stay his hand. An unrealistic triumphalism, which suggested that Christians should always be bright and cheerful also helped to insulate missionaries from the privations of life in the field and times of sorrow in the family. Martyn Lloyd-Jones wrote to Stanley and Norah on the occasion of the Philip's death. His letter shows great pastoral insight and understanding, "As we would expect from you, your letter is full of triumphant faith. But we are not meant to be unnatural, and you are bound to feel the loss of such a bright spirit very keenly."
While it is true that the Lord must come first in all things, that does not mean that believing parents are entitled to put their Christian service before family life. Children are a very precious gift from God and the primary responsibility of Christian parents is to bring up their children with love and affection in the nurture and admonition of the Lord (Ephesians 6:4). Only in very exceptional circumstances should Christian parents place their children in boarding schools. The other day my daughter accused me of abandoning her because I had to take an extra evening meeting one week! What children like Faith must have felt on being separated from their parents I don't know. If a mission situation demands the separation of parents and children, then let single missionaries or couples without children do the work. The task of missionaries is not simply to spread the Gospel, but to model family life in a godly home. That cannot be done if the children are sent away to be educated. I'm glad that a more enlightened (and biblical!) attitude now seems to prevail in missionary circles. Pastors with couples on the mission field should ensure that the needs of family life are carefully taken into consideration.
Faith expresses the feelings of understandable resentment that she felt against her parents as a child. But the thing that shines through in this book is not her bitterness, but her faith. In all her sorrows and troubles she was aware of the hand of God, guiding and protecting her. The author married Paul Cook and became a pastor's wife. Letters penned for Faith's absent parents while in her teenage years helped kindle a gift for writing that has found expression in her many helpful books. (Such as William Grimshaw of Howarth, Banner of Truth Trust & Fearless Pilgrim: The life and times of John Bunyan, Evangelical Press).
On a personal note, a few years ago we holidayed on the island of Jersey. Paul Cook happened to be filling the pulpit for a few weeks in the summer. Paul and Faith invited us back to their flat for some tea and cake after the evening service. We had a lovely time of fellowship. Faith had just finished writing her historical novel for children Beneath the Scaffold, Evangelical Press, and we talked about her books. Somewhat awestruck, my son asked Mrs. Cook "Are you famous writer?" Modestly she replied, "No, I'm not." But her cheerful and kindly spirit, just as much as Paul's sharp mind left us deep impression on us all. No doubt Faith Cook is not the only believer from a Christian home to have suffered a traumatic childhood. Her painful story shows that the Lord is able to restore the locust eaten years and fill the hearts of his people with love and faith.
Posted by Guy Davies at 10:31 am

I've just read your review of 'Troubled Journey' and have been blessed by it this evening.

Reading your thoughts as a new parent in Peru has added a real depth and dimension to my reading of them tonight. How much of a blessing children are, and how wise we must be in balancing ministry and family life.

Thanks again for your assessment.
Andrew

How are you doing out there? Do you send out a e-mail prayer letter or anything? If so, please add me to the list of receivers.

Hi Guy,
We're keeping well, and are just limbering up for language study at the moment. I'll not mention the weather in the Southern hemisphere as I hear it's a little cooler in the UK!

Thanks for asking re our prayer letter - I'll add you to our email list. We also have a ministry blog with some news etc on www.theroycrofts.co.uk

I trust you are continuing to know the Lord's blessing on your labours in Wiltshire.

Thanks for the link to "The Road to Peru". I've been looking for some up-to-date news, but things have been (understandably) quiet over at Double Usefulness.

We're quietly encouraged. Good opportunity to witness to the local barber today. He's been asking for a CD of my preaching, so I left him with a copy of last Sunday's ministry. I wonder what he'll make of it?

I'm not sure if I sent my comment correctly yesterday, so I'll just try again. It was just to say that, though very sympathetic to the concerns you express, I would think that many missionary parents of that era, judging at the time that boarding school was the best option for their children, did not only commit them to God's care, but pray constantly and earnestly for them, and give themselves to opening up good parent-child conversation and discussion with gospel application when the children were at home, and in regular letter writing. These can be neglected when families are all together all the time, or lose their pertinancy.
Many probably did see their children coming through the trials with love for their parents intact, or rekindled, appreciation of their parents' prayerful, anguished decisions regarding schooling, and personal faith in Christ.

Undoubtedly not all missionary childhoods of that generation would have been as harrowing as that of Faith Cook's. I don't doubt the motivation of the missionaries or their love for their children. In the book Faith Cook speaks warmly of her parents and tries to understand the reasons behind their decisions.

As regard to bonds of love being strengthened between missionary parents and children, despite the use of boarding schools, thankfully God is able to work all things together for good for those who love him. But sending children away to school is not ideal given the New Testament's emphasis on parents bringing up their children in the context of a godly home.

My parents weren't missionaries, so maybe it's difficult for me to enter into these things. I was simply trying to offer a sympathetic review of the book.

Hello, I realize this is an archived post but I was happy to find it. I have several of Faith Cook's books and absolutely love them.

I appreciated your review and thoughts and share them. As new believers in the 1970's we were strongly influenced by a retired OMF missionary from China who had also fled in the 50's. Mostly like a co-worker of Faith Cook's parents.

We were very close to this widow (her husband died in China) and we hosted monthly OMF prayer meetings in our homes for several years while attending Bible College. Everything you wrote in your observations we found to be true and although we commended the zeal and work, we just could not bring ourselves to abandoning our children to boarding schools. We felt that God intended for us to raise them and not someone else.

It was a very difficult decision because we received heavy criticism for putting our children before the work of the Lord.

Now that the kids are grown we are praying about some short term mission work, Lord willing.

Thanks for your comments, Diane. I'm glad you found the review helpful. May the Lord guide you as you seek to know his will. I'm sure you did the right thing in bringing up your children yourselves.

Dear Guy,
This is an old conversation but I have just found it. I am the child of missionaries who wen to to East Africa in 1952 and I and my brother had to be sent to boarding schools until 1964 when we all returned to the UK. I can see that my own experience at secondary school in particular was not good for me and perhaps damaged my ability to live in the world, although this is a subjective evaluation. My mother did suffer by our absence a great deal. I don;t think my parents were triumphal, though. They did what they thought was right. Despite what I would say was 'damage' that I suffered by being sent away, I don't think I would agree with your firm statement that sending children to boarding schools is always wrong. As I look back, I see that God has been good to me all the days of my life. Perhaps we think that our lives are supposed to be as little afflicted as possible. Today it seems to me that much of the deficiency I suffered in younger days has been wiped away, and I know that I am outgoing in ways that I could not have imagined then, despite my generally introverted personality. It is good, though, to thank God for our imperfect parents, whose decisions on our behalf were known and overseen by the Lord of Glory from the very beginning.