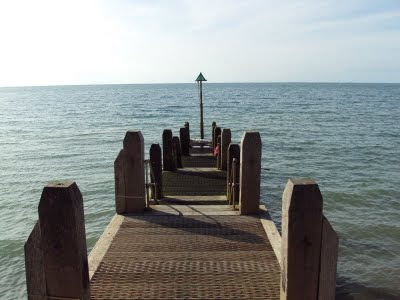 We had a variety of speakers for the evening meetings, which ran from Monday to Friday. The preachers were tasked with heralding the gospel of salvation. (See here for my report of the Morning Addresses).
Jonathan Thomas of proGnosis & Very Random Thoughts was the first to preach. He gave a clear and compelling sermon on the Parable of the Prodigal Son (Luke 15:11-32). The parable is the most familiar of all Jesus' stories, but Thomas' handled the passage in a lively, fresh and insightful way. His headings were: 1. The greatest story ever told. 2. The greatest message ever given. 3. The greatest offer ever made. I especially liked the fact that Thomas did not neglect what the parable said about the Pharasaical older brother. The gospel is for self-righteous Pharisees as well as wanton prodigals. The gracious Father runs to embrace both types of sinner in Christ.
The veteran preacher, Richard Bewes of All Souls, Langham Place spoke twice. Every inch the grand old man of Evangelical Anglicanism, at first glance he cut a rather strange figure at the bastion of Welsh Nonconformity that is the Aber Conference. But his two messages were sound and stirring. On Tuesday evening he preached on the redeeming blood of Christ (Hebrews 9:22). The sermon lacked a certain structure, but his message was absolutely clear - without the shedding of blood there is no forgiveness of sin. A ringing declaration of penal substitutionary atonement. On Wednesday he held before us the question “Who is this?” from Matthew 21:10. More structure this time: 1. The world has not solved the enigma of this King. 2. The world has not found the equal to this King. 3. The world has not seen the last of this King. Bewes' insistence on describing conversion in terms of people "making a decision for Christ" grated a little on my Calvinistic sensibilities. But these were thrilling evangelistic messages that drew a circle in the sand around the lost and faced them with the claims of Christ.
Peter Baker preached from Mark 1:32-2:12, urging us to adopt Jesus’ own priorities, a commitment to prayer, compassion for people and the centrality of forgiveness.
Andrew Davies brought the conference to a fitting conclusion, with a sermon on the message of the three voices in Romans 10. The voice of Moses (Romans 10:5) says, "Do this and live." We cannot because sin is a cancer in the soul rather than a splinter in the finger. The voice of faith (Romans 10:6-10) says, "Believe that God raised Jesus from the dead and confess him as Lord and you will be saved." The voice of Scripture (Romans 10:11) says, "Whoever believes on him will not be put to shame."
I didn't make any of the afternoon seminars this year. But I can tell you that Joel Beeke marked the 500th birthday of Calvin with a look at the Reformer's evangelistic efforts, Ian Parry drew attention to Lloyd-Jones on evangelism and and Gwyn Davies spoke on the 1859 Revival in Wales. Our kids enjoyed the Jaber meetings for 11-14 year-olds. They had fun and games, learned about Calvin and had talks on stuff like secular humanism. When I quizzed them on the meaning of secular humanism they replied, "Don't you even know, dad?" It was good to meet up with old friends and to have fellowship with Christians I hadn't met before. See Gary Brady's jottings for more reportage.
The main speaker for Aber 2010 will be Dale Ralph Davis, with the following booked for the evening meetings: Gareth Williams, my friend Martin Downes of Against Heresies, Bill James and Stuart Olyott (9-13 August).
CDs and DVDs of all the 2009 sermons and seminars are available from the Evangelical Movement of Wales.
Posted by Guy Davies at 9:01 am

I attended the conference.  Joel Beeke was excellent.  His messages were not only Biblically sound and full of excellent instruction, but there was a reality about him, a gentleness, meekness, humility and Christlikeness.  This man knows God and it shows. However, I was saddened by the evening messages (apart from Andrew Davies).  Peter Baker is a clever man and good speaker but not a preacher.  His demeanour resembled a salesman/American TV evangelist/life coach.  Indeed much of what he said would have been more relevant in a business setting.  His message on time management and social concern had little to do with the Scriptures and the fact that we are lost sinners who need a Saviour. The gospel was mentioned at the end but it was vague and not at all clear.  Even if his message had been Biblically-based and excellent, his slick and worldly-wise, self-confident demeanour would have denied what he was saying.  Jonathan Edwards in his writings on revival warned us of this danger but Christians seem unable to tell who is a called man of God these days. Discernment is lacking because there is so little true godliness around. I wept because it was so opposite to what Christianity is all about and there were thousands of souls, a good number of young people who were unsaved, who needed a clear gospel from a humble preacher.  May God help us all.