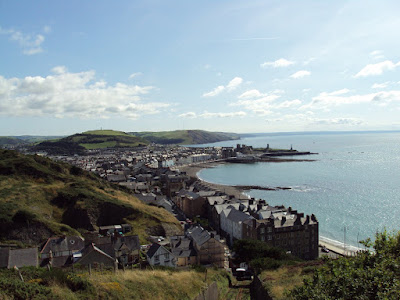 Every year over 1,000 people, a good number of them less than 25 years of age, descend upon Aberystwyth in the second week in August. What is it that attracts them to the west Wales seaside town? I’ll give you three guesses. Is it, a) Guaranteed sunshine, a fine sandy beach and the glimmering azure sea? b) The camera obsrura perched atop Constitution Hill? c) The Evangelical Movement of Wales ‘English Conference’?

If you opted for the last choice, then congratulations! You are absolutely correct. The Aber Conference with its “no frills” approach to worship and emphasis on the centrality of preaching is the big draw. Having laid aside my duties as Chief Steward last year, I was free to simply enjoy the conference. The main speaker at this year was Joel Beeke of Grand Rapids, Michigan. His chosen theme, spread over Tuesday to Friday mornings was ‘Contagious Christianity’. Beeke was careful to say that he did not believe that Christianity can be caught like the common cold. But we can influence others by our lives and witness to Jesus. To be contagious Christians, we need to be saved in the first place. Also, we must make use of the spiritual disciplines such as private prayer and Bible reading and avail ourselves of the means of grace in the life of the church. We should develop an evangelistic heart that desires to reach the lost for Christ. While the use of means is important, in the end only Spirit-given grace can make us contagious Christians.
Each message was based on a particular bible character whose life exemplified an aspect of spiritual contagiousness. Tuesday: Jephthah’s daughter (Judges 11:34-40) showed contagious sacrificial submission when she gladly submitted to her father’s vow. The preacher argued that Jephthah did not actually sacrifice his only daughter as a burnt offering. Rather he insisted that she remained an unmarried virgin. Beeke gave a long list of reasons for his view, but I wasn't convinced. However we understand the fulfilment of Jephthah's vow, his daughter's self-sacrifice was certainly admirable. Like her we must learn to submit to the Lord when faced with suffering and trial. By way of application Beeke pointed out that she acknowledged the Lord, justified the Lord, approved the Lord, clung to the Lord and honoured the Lord. Her attitude was contagious. Every year the daughters of Israel commemorated her sacrificial submission.
Wednesday: When Jesus healed blind Bartimaeus (Mark 10:46-52 & Luke 18:43) he followed the Lord and glorified him. As a result many who saw what had happened also glorified Jesus.
Thursday: Jacob’s wrestling with God (Genesis 32:22-32) shows us that persevering prayer leads to contagious blessing. Jacob was a broken man after his encounter with God, but having prevailed with God, he was also able to prevail with men.
Friday: Lastly we looked at Daniel (Daniel 1) and the contagiousness of consistent integrity. Daniel's determination not to compromise in his youth led to a long life of faithful service.
You did not have to agree with every aspect of Beeke’s exegesis to profit from these thoughtfully structured, finely illustrated and tellingly applied messages. Experimental Puritan-Reformed preaching at its heart-warming and challenging best. Oh to be more of a contagious Christian!
CDs and DVDs of these sermons are available from the Evangelical Movement of Wales.
Posted by Guy Davies at 9:56 am

Two Jephthah-sermon blog-posts on one day! What are the chances? And worthwhile reflections here and there, too.

It's hard to accept that Jephthah actually sacrificed his daughter - and she let him do it. But that's what the text seems to indicate. Dale Ralph Davis' handling of the passage is helpful.

Good to be back.

I thought Joel's argument for believing Jephthah didn't actually kill his daughter was pretty convincing, but since I have zero knowledge of hebrew, I have to put my trust in people who say they know what is actually being said.

So I am interested to know the reason you remain unconvinced.