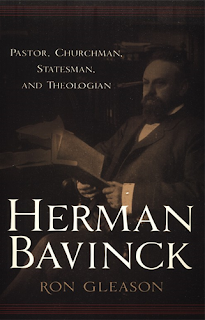 Readers of Herman Bavinck’s Reformed Dogmatics, recently published in English translation will understandably want to acquaint themselves with the man behind those four majestic volumes of theology. However, apart from the biographical sketch that forms part of the introduction to each volume of Reformed Dogmatics, little information on Bavinck’s life has been available in English. Ron Gleason has made good on that lacuna with this full-length biographical study.

Gleason delves into Herman Bavinck’s family background in an attempt to discover the factors that shaped his life and thought. His father, Jan Bavinck was a Separatist pastor, serving various Christian Reformed Church congregations over the course of his ministerial career. When the time came for Herman to undertake theological study it was expected that he would enrol at the Separatist Theological Seminary in Kampen. But he caused something of a stir in Separatist circles by electing instead to study at Leiden University, a bastion of theological liberalism.

How did Bavinck manage to leave Leiden with his Reformed faith intact? Gleason suggests that his upbringing among the Separatists gave him a thorough grounding in the Scriptures and Reformed theology. This is no doubt true, but the situation was a little more complicated than that. Gleason makes no mention of the crisis of faith that Bavinck experienced while at Leiden. It would have been interesting to learn how Bavinck recovered from this so that he emerged from his theological studies capable of exposing the failings of liberalism in the light of historic the Reformed faith. His ability in this area is amply displayed in Reformed Dogmatics.

After graduating from Leiden with a theology doctorate, Bavinck became pastor of a Separatist congregation in Franeker. He was only in pastoral ministry for a year, but his time as pastor had a formative influence on his work as a theology professor. Bavinck served at the Separatist seminary in Kampen from 1882-1902 and then at the Free University Amsterdam from 1902 until his untimely death in 1921.

Much of the biography is taken up with Bavinck’s role in the ecclesiastical politics of his day. 1892 saw the union of the Christian Reformed Church and the Doleantie Churches. The Doleanite Churches were a reformist grouping in the Dutch Reformed State Church. Under the leadership of Abraham Kuyper they took a strong line against the liberalising tendencies of their denomination. But the union was not a happy one.  There were differences of emphasis in the two bodies that formed the united Church. Strong characters on both sides vied for supremacy in the newly formed body. A particularly intractable issue was the proposed merger of the theological seminary at Kampen and the Free University in Amsterdam. Bavinck was heavily involved in the tortuous and ultimately futile negotiations.

The undisputed hero of this book is Herman Bavinck. This is his biography after all. But Abraham Kuyper is cast as something approaching the villain of the piece. Apart from an occasional lapse, Bavinck is presented as a man of patient integrity and godly wisdom. Kuyper is not without his virtues, but he comes over as a slightly sinister figure. An unflattering picture emerges of Kuyper as a man who was capable of high handed imperiousness and low political cunning. Although Bavinck and Kuyper often worked closely together, they became increasingly uneasy allies and eventually fell out over Bavinck’s scheme for the merger of the Theological Seminary and Free University. While Kuyper undoubtedly had his faults, Gleason’s account seems a little one sided at times.

Gleason concentrates on Bavinck the ecclesiastical politician and gives few glimpses of his interior life. Little is said about Bavinck as a husband and father, or his personal walk with God. Readers of Reformed Dogmatics might have liked to know how the theologian went about writing his magnum opus. While this is not a theological biography, it is a biography of a theologian. More discussion of Bavinck’s special contribution to Reformed theology and an account of his key theological ideas would not have gone amiss. A good biography will give readers the feeling that they have come as near as possible to getting know the subject personally. A compelling psychological portrait will bring the subject to life as the pages turn. Gleason gets close, but he doesn't quite get under Bavinck’s skin.

In places the work suffers from an inelegant style and poor editing. Gleason’s attempts at humour are sometimes ill-judged, such as the “joke” about the discovery of gin bottles belonging Bavinck’s alcoholic predecessor as pastor at Franeker. The occasional Americanism may grate, such as “slam dunk” (p. 92) and “However, this was a huge however…” (p. 246). Gleason intimates that he will say something about the death of Herman’s brother, Johan Gerrit in chapter 7 (p. 152). But an account of Johan’s passing is held off until chapter 8, (p. 203) The exact words used by Gleason to describe Bavinck’s mindset on page 172 are repeated in the context of Kuyper’s advice to Bavinck on the following page. The writer sometimes lapses into cliché, “Both sides had thrown down the gauntlet; a line had been drawn in the sand.” (P. 253). Such blemishes detract from the reader’s enjoyment of the book.

Gleason’s effort is currently the only one on offer when it comes to a full-length Bavinck biography in English. His carefully researched work provides a wealth of detailed biographical information. But perhaps one could have wished for a slightly more insightful and better written account of the life of the great Dutch Reformed dogmatician.

* Reviewed for the European Journal of Theology.
Posted by Guy Davies at 8:02 am

Thanks for this Guy. Its a shame that this is the only biography available, think I'll save my pennies until a definitive one emerges - that would be a real slam dunk don't you think? Awesome!

Hi Guy - I thought I had submitted a comment linking the "poor editing" with the reference (3x in this review) to "KampDen" rather than "Kampen". No need to approve the comment, but you'll probably want to fix the blooper as the review goes to EJT, although if you don't, the review editor probably will. :)

Doh! Thanks, David. That's the kind of mistake you expect on an unedited blog. Especially this one.