Graham Harrison on Engaging with Lloyd-Jones: Round One 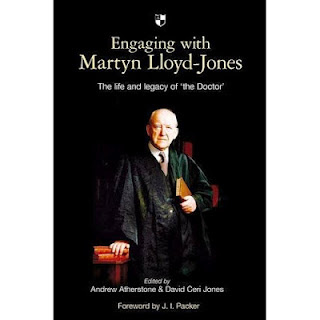 I was never a member of Emmanuel Evangelical Church, Newport where Graham Harrison was the Minister for so many years. But I often sat under his preaching when living in Bassaleg, near Newport, and when visiting family back in South Wales. In addition, Graham Harrison was our systematic theology lecturer when I studied at the London Theological Seminary from 1988-1990. In one way and another he has had a formative impact on my life and ministry. I did a summer pastorate at Emmanuel some years ago, standing in for Graham when he was on sabbatical. We stayed at the Harrison's home for a month. Our son was a baby and Sarah was carrying our daughter, so it must have been a while back. What impressed me most about my time there was not so much Mr. Harrison's well-stocked library, but the realisation that the theologian and preacher was also a pastor. Talking to members of the congregation, it was evident that Graham cared for his people, visited the elderly saints regularly and comforted those who had lost loved ones.

But  Mr. Harrison could also be a bruiser, taking no prisoners in the cut and thrust of theological debate and discussion. If you were going to disagree with him you had better be able to put up a fight. Back in 2006 I had Graham come and speak on 'Martyn Lloyd-Jones 1966 & Today'. You can see a report here. While not agreeing with everything Lloyd-Jones said and did, Harrison is convinced that 'the Doctor' was right on the big issues, such as evangelical unity and the need for revival. It was with interest, then that  I read  the first part of his review of Engaging with Lloyd-Jones. Harrison the Heavyweight is to the fore.

Seconds out for Round One of this rumble in the theological jungle.

Here's an excerpt to get you going,

One other thing is lacking overtly from the book. It is the dimension of the effect he provoked on the part of those to whom his presence and the powerful expression of his views constituted something of an alien intrusion. That he was not English was a fact that soon became apparent. Nor did he come from Scotland which in a peculiar way (despite Gordon Brown) is still somewhat fashionable in London! He could not abide snobbery in any shape or form – whether or not it was expressed religiously, politically or merely socially. Many will have said - although Lloyd-Jones would no doubt have disagreed most strongly with them - that he was a self-made man who came from a remarkable family. Undoubtedly he possessed a boldness in advocating his opinions and something of a temperamental inability to be intimidated by persons or views contrary to his own. There can be little doubt that he was viewed as something of an irritant to the settled equanimity of the circles into which his gifts thrust him. It could not be gainsaid that he was intellectually brilliant, well able to hold his own in any company; he was a Christian of Calvinistic convictions and a preacher of remarkable power. But he was Welsh and unafraid to say so; he was not an Anglican but a dissenter and a nonconformist; furthermore, swimming against the tide was something that rarely seemed to bother him – particularly as usually and eventually he seemed to do it so well. Some find this hard to take – and, dare we say it, still do! Signs are not wanting in this volume that this attitude is still there, lurking, as it were, under the surface. Perhaps an open, full-blooded expression of such criticism would have been useful, if only to clear the air!