Anselm on faith seeking understanding of the Trinity 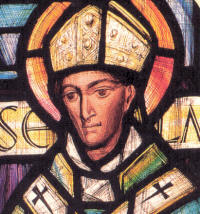 The other week I posted some thoughts on Anselm's treatment of God's justice and mercy in his Proslogion (here). I mentioned that I also wanted say something about his thinking on the Trinity in the same work. I thought it might be interesting to contrast Anselm's approach to the subject with that of John Calvin in the Institutes (Book I:XIII). Like Anselm, the Reformer begins with the essential unity of God and then discusses his tripersonality. But even here, methodological differences are evident. Anselm cites Scripture in the Proslogion, and the God who is 'something-than-which-nothing-greater-can-be-thought' is clearly the God of the Bible. But his work is not sufficiently grounded in the self-revelation of God in Holy Scripture. Human reason rather than divine revelation to the fore as Anselm elaborates his argument for the existence of God.

What Calvin has to say both on the the essence of God and his triunity is more explicitly rooted in the Scripture. He has less faith in the power of human reason to explore the divine essence. What the Bible says regarding the immensity and spirituality of God's essence "checks the audacity of the human mind" (I:XIII:1). This is quite unlike Anselm's approach in the Monologion, a meditation on God's essence where "nothing whatever be argued on the basis of the authority of Scripture, but [by] the constraints of reason" (Anselm of Canterbury: The Major Works, OUP, 2008, p. 5). While Calvin believed that reason and philosophy had a place in theological work, he would not have shared Anselm's confidence in human thought processes to search out the divine. For him faith seeks understanding in the Bible not in elaborately constructed arguments that sit loose with Scripture.

In the Monologion, Anselm devotes a large number of sections to the Trinity (29-66). He seeks to explore the doctrine in accordance with "the constraints of reason". However, he has to cheat a little. Were Anselm's thinking not already informed by biblical revelation, he would have known that the One God exists in three persons, Father, Son and Holy Spirit. While the doctrine of the Trinity is not irrational, it could not have been discovered by the human mind apart from Scripture.

The Proslogion devotes only one section to the Trinity (23). In this brief compass Anselm offers a distillation of his teaching on the triunity of God that was more fully developed in the Monologion. His handling of the subject is highly influenced by Augustine. The Church Father posited that in the One God there is Lover (the Father) Loved (the Son) and Love (the Holy Spirit). Similarly, Anselm argues that God's Word is God speaking. The Word therefore cannot be anything less than God. As God's essence is simple, nothing can be born from God that is not God.  The Love that proceeds to and from the Father and the Son/Word is the Holy Spirit. The Spirit  is not different in being from the Father and the Son, as he proceeds from the simple unity of the divine essence.

Anselm's account of the doctrine of the Trinity owes more to Augustine's psychological model (God as Lover/Loved/Love) than biblical revelation. As a result Anselm offers a rather speculative account of the Trinity, especially in the Monologion. The actions of the Trinue God in the drama of redemption as disclosed in Holy Scripture are not given a determinative enough role in theologian's treatment of this most important teaching.

This is exactly the point where Calvin  differs from Anselm. The Reformer does not shy away from the use of philosophical terminology such as 'person', and 'essence' in formulating his doctrine, but he wants to rein in speculation as much as possible. He does not begin with the simple divine essence and posit that God's Word must be God and that the Love between God and the Word must also be divine. He appeals to divine revelation, "While he proclaims his unity, he distinctly sets it before us as existing in three persons" (I:XIII:2). The tripersonality of God is not arrived at by a process of reasoning, 'he proclaims...he distinctly sets it before us.'  And God reveals this truth about himself because he does not simply want us to believe that there is a divine being, even One who is 'something-than-which-nothing-greater-can-be-thought', but that we might know him personally. "These we must hold [God's unity and three persons], unless the bare and empty name of Deity merely flutter in our brain without any genuine knowledge." (I:XIII:2).

Calvin justifies the use of extrabiblical terms in with reference the doctrine of the Trinity in order to safeguard the meaning of biblical truth which was under attack from heretics. But he would much rather a minimalist approach that sticks as closely to the language of Scripture as possible. "I wish, indeed, that such names were buried, provided all would concur in the belief that Father, Son and Spirit, are one God, and yet that the Son is is not the Father, nor the Spirit the Son, but each has his peculiar subsistence." (I:XIII:5).

Notwithstanding, Calvin is insistent that the word 'person' is appropriately used of the Three. This is important, because although Anselm also speaks of one God in three persons, his account of the intertrinitatian relations tends to undermine the distinct personhood of the Son and the Spirit. As noted earlier, he refers to the Word/Son as God's truth, which cannot be anything other than God, and the Spirit as the Love that proceeds from the Father and the Son. This is to confuse attributes and persons. The Son is not simply God's truth. He is a person with the same essence as  the Father, sharing all the attributes of his divine being. The Spirit is a person who loves the Father and the Son and is loved by them, not merely the Love that proceeds from the Father and the Son. Anselm knows this saying, "whatever each is singly, that the whole Trinity is together, Father, Son and Holy Spirit" (p. 100). He was certainly no modalist, but his Augustinian psychological model of the Trinity does not do justice to the full personhood of the Son and Spirit. That failing can in part be traced to the fact that he seeks to deduce the three persons from the simple divine essence rather than giving proper attention to the communicative action of the triune God disclosed in the Scriptures. Calvin is more in tune with the trinitarian dimensions of the drama of redemption, "But as God has manifested himself more clearly by the advent of Christ, so he has made himself more familiarly known in three persons." (I:XIII: 16). The Reformer cites the baptismal formula issued by Christ is a case in point (Matthew 28:19).

Another thing. In the Monologion, Anselm claims that "The Son...has his essence from the Father as well as having the same essence as the Father." (p. 58). It is proper that the Father as supreme spirit begets the Son and that the Son was begotten of him (p. 52). But this introduces an element of subordination into Anselm's doctrine of the Trinity. The Father's essence was unbegotten and therefore without origin or derivation, but the Son's essence was derived from the Father. Calvin will have none of this. He dismissed as "an absurd fiction" (I:XIII:29) the scholastic teaching on the eternal generation of the Son. To him, the idea that the Father eternally generated the Son's divine essence was the wost kind of theological speculation. Instead, he proposed that "the Godhead is absolutely of itself [autotheos]. And hence also we hold that the Son, regarded as God, without reference to his person, is also of himself [autotheos]; though we also say that, regarded as Son, he is of the Father. Thus his essence is without beginning, while his person has its beginning in God". (I:XIII:25). He is the Son of the Father, but he is God because he is God. According to B. B. Warfield with Calvin's "firm and unwavering assertion of the autotheos of the Son...the  homoousios of the Nicene Fathers at last came into its full right, and became in its fullest sense the hinge of the doctrine". (Calvin's Doctrine of the Trinity, in Calvin and Augustine. p. 283 & 284, P&R, 1980).

Much work has been done in recent decades to show that it is simplistic to drive a wedge between the 'speculative scholasticism' of the Medieval Church and the 'pure biblical theology' of the Reformers. Calvin drew on the insights of scholastic theology, while deprecating its excesses. But Calvin's handling of the doctrine of the Trinity seems a world away from that of Anselm. He has less confidence in the power of human reason and his teaching is more explicitly shaped by the drama of redemption as revealed in Holy Scripture. He is respectful of the theological heritage of the Church, but he does not simply repeat Augustine's psychological 'Lover, Loved and Love' account of the Trinity. He offers a corrective to the subordinationist strain in Western theology, with his emphasis on the autotheistic  character  of the Son's divine essence. He recognises an order of persons in the Trinity, but this is not based on derivation of essence, but the personal relations of Father, Son and Holy Spirit.

God has revealed himself as a Trinity in order to bring his people into union and communion with himself. True knowledge of God in his three persons does not 'flutter in our brain'. We believe in order to understand. And understanding should lead to the worship our triune Creator, Redeemer and Perfecter. In in the words of Gregory of Nazinus that 'vastly delighted' Calvin,


No sooner do I conceive of the One than I am illumined by the Splendour of the Three; no sooner do I distinguish Them than I am carried back to the One. When I think of any One of the Three I think of Him as the Whole, and my eyes are filled, and the greater part of what I am thinking of escapes me. I cannot grasp the greatness of That One so as to attribute a greater greatness to the Rest. When I contemplate the Three together, I see but one torch, and cannot divide or measure out the Undivided Light. (Gregory of Nazianzus' (ca. 330-391) Orations 40.41)