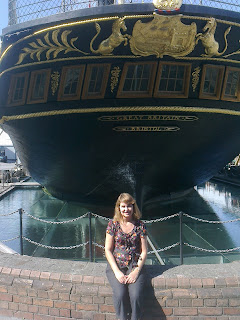 Last Saturday we headed for Bristol. Although the city isn't too far from where we live, we don't often go there. In fact we only went to Bristol on Sagturday morning to drop our teenage children off at a youth conference at Philip Street Baptist Church. After that was done we intended to return home only to pick them up later in the evening. However, having made the effort to get there (it took about an hour), Sarah and I decided that we may as well stay in Bristol for the day.

On the spur of the moment I thought it might be a good idea if we went to see the ss Great Britain and afterwards have a wander around the city centre. As a boy I remember being taken to see Isambard Kingdom Brunel's mighty propeller-driven steam ship, which is moored in Bristol docks. I can't remember much about the visit, or when it was, but I don't think I was that old. The liner was brought from the Falkland Islands to Bristol in 1970, when I was 4 years of age.


One problem. Unusually for me I had forgotten to bring my mobile phone. The ship is a major tourist attraction and was bound to to have a website from which I could get a postcode for the SatNav. No phone, no Google. But then  I remembered that our Nuvi Sat Nav has a Places of Interest search thingy. I tapped in "ss Great Britain" and up came the coordinates. A closed road confused matters a little, but we got there eventually and found that we could park all day on a Saturday for £1.10, which isn't bad.

The ss Great Britain is brilliantly exhibited. It is surrounded by a glassy sea (which sounds kind of biblical). Beneath the "sea" you get to see the liner's  iron hull, which is badly corroded in places. A state-of-the art de-humidifying system helps keep further corrosion to a minimum.

The old transatlantic liner has been painstakingly restored and looks great. It was fascinating to explore the ship below decks. The First Class accommodation looked pretty cramped and basic until compared with even more Spartan Steerage living quarters. The large dining room was suitably plush and grand. An informative audio commentary, together with wax figures of passengers and crew helped bring it all to life. Not to mention the sometimes all too authentic smells of life on board. Including a faint whiff of seasick. Nice. 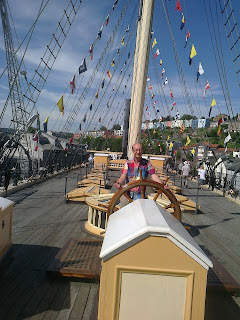 If that doesn't put you off your lunch, the nearby Dockyard  Café  Bar does some decent paninis and serves good coffee. We bumped into a couple of friends at the café, who, unbeknown to us were also spending the day in Bristol while their daughter was at the conference.

After lunch we went for a walk into the city centre and enjoyed wandering around Bristol Harbour, with its many shops and restaurants. Looking for somewhere we could grab an an evening meal, before collecting our two from their conference we came across Lloyds Bar and made a mental note. Two meals for just over £8. Later we returned and had steak and kidney pud, chips peas, and gravy. Not bad too.

But before that we headed for the "west end" shops, wandering past the Cathedral and ended up taking a look at Bristol Museum. The art gallery was pretty good. The more modern installations didn't do much for us, but there was a decent portrait of Martin Luther and an amazing Wafer Throne carved out of wood.

The ss Great Britain serves as an apt metaphor for the country after which it was named. Above the waterline all looks well. Especially after the triumphs of the summer's Olympic and Paralympic Games. But peer beneath the waterline and the ship of state is in danger of rusting to pieces.

So there really is a portrait of Martin Luther in Bristol City Museum. Some years ago I was passing and my eye was caught by a poster showing a picture of the great reformer. I rushed in excitedly and asked the first members of staff I met where I could find it in the art gallery. "Martin Luther, Martin who?... I don't think so. Do you mean Martin Luther King?"