Procrastination without hurrying for any 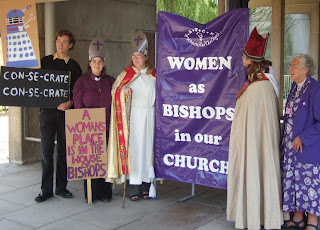 I realise that the women bishops thing was last week's news and that a week is quite a long time in the fast moving world of blog-land. But it's taken until today for me to muster the motivation to write something about the affair. Even now I can hardly be bothered. I mean, I'm not an Anglican and I don't believe in diocesan bishops, whether male or female. Bishops or overseers are simply elders of local congregations. They are not mitre wearing, crook wielding princes of the church. And according to the Bible, elders are male and that's that. It's not really my concern as a Reformed Baptist that the ordination of women bishops failed to attract enough support in each of the Church of England's electoral collages.

So, why am I writing about this now? It's because this issue has highlighted the anomaly of us having an Established Church. In the wake of the no vote, or at least the not enough yeses vote, outraged MPs have weighed in, demanding that the CofE gets its house in order and fast track the ordination of women bishops. Some mutter darkly that the State Church should not be exempt from equality legislation. David Cameron has demanded that the Church of England, "get with the programme", whatever that means. The fact that half of the opponents to women bishops were women rather than crusty old male chauvinists (see here) doesn't seem to figure.

The trouble is that as the Established Church, with bishops in the House of Lords, the Church of England is vulnerable to such Erastian pressure. Erastianism is the view that the Church is in effect the religious arm of the State and should jolly well do what it's told by its political masters. Henry VIII was an Erastian. So, it seems is David Cameron, although in a much nicer way. After all, not even the Tories are the 'nasty party' any more.

I'm a Free Church man. I don't believe in the establishment principle. Church and State are distinct institutions, with very different roles and functions. What God hath separated man shall not join together. Robert Browne, seceded from the Church of England in the 1580's over just this point. The Separatist wrote an influential book Reformation Without Tarrying for Any, arguing that the church should not wait for permission from the State to instigate reformation according to the Word of God. The treatise, which outraged the authorities, was in effect his death warrant. But by the same token, the church should not give in to pressure from the State to make changes to its biblically grounded teaching and practice.

The fact that the Church of England is the Established Church complicates matters. If the Church has a say in the State, then the State will demand a say on what happens in the Church. But when it comes to making a decision on women bishops, I suggest that Anglican leaders man-up and resist the pressure from politicos rush things through. Procrastination without hurrying for any, if you like. That should give some time for an accommodation to be reached with opponents of the measure. However, there is one thing that cannot be delayed and that is the disestablishment of the Church of England that will free it from from political interference in the first place.

What Evangelicals are doing in the middle of this unholy muddle, though I can't quite understand.
Posted by Guy Davies at 9:28 am

Email ThisBlogThis!Share to TwitterShare to FacebookShare to Pinterest
Labels: Church

While agreeing that the disestablishment of the Church of England is an outcome devoutly to be wished, I'm not at all sure it would in any way ensure their freedom from political interference. Politicians of all colours have a taste for interference and all the signs are that they will be wanting their say, not only in the running of the Church of England, but in the conduct of any church, Free or not.

My thoughts almost exactly - the whole thing's irrelevant, and what on earth are evangelicals playing at? (You meant 'seceded' I think, not 'succeeded' - but hey! What's a few letters between friends!

True Ben, but establishment gives the politicians more of an excuse to interfere.