The wonder of creation 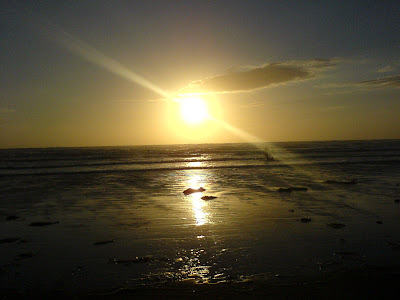 I sometimes get the impression from fellow evangelicals, that God gave us the doctrine of creation to equip us to oppose Darwinian evolution. Also, I often reflect on whether our creation apologetics is too narrowly focused. Creationist literature seems to be aimed at convincing sceptical atheists or hard nosed scientists that God created the universe in six days. Much time is spent discussing the fossil record, the speed of light etc. in a highly intellectualised way. Of course this kind of thing needs to be done, but there is a danger of reducing the biblical doctrine of creation to an argument over dead lizards. We seem to have forgotten that human beings are not simply data processing machines. We have emotions and imaginations. Our presentation of the doctrine of creation should appeal to the human sense of wonder at the beauty and complexity of the universe. We need to address the heart that is inexplicably moved by a sunset as well as the mind with its capacity for reason and empirical investigation. If we simply appear to be clever clogs who can score points against old Darwin, then we have lost the battle before we have begun.
Richard Dawkins is aware of this. He thinks that religion gives us an impoverished view of the universe,
"The universe is genuinely mysterious, grand, beautiful, awe-inspiring. The kinds of view of the universe which religious people have traditionally embraced have been puny, pathetic, and measly in comparison to the way the universe actually is. The universe presented by organised religions is a poky little medieval universe, and extremely limited."
This needs to be challenged. Christians appreciate the wonder universe on an intellectual level in terms of grand scientific description. We can do this because God has given us the capacity for rational thought and empirical investigation. The universe is capable of being understood on that level because it is the product of a wise and good God. But beyond that, we stand before the vastness of space and are forced to contemplate the meaning of our own existence in relation to our Creator,
When I look at your heavens,
the work of your fingers, the moon and the stars,
which you have set in place,
what is man that you are mindful of him,
and the son of man that you care for him?
Yet you have made him a
little lower than the heavenly beings
and crowned him with glory and honor.
(Psalm 8:3-5)
Much of the Bible's doctrine of creation is written in song rather than in narrative prose. The psalmists consider the universe in all its vast complexity of stars and planets. They joyfully describe the earth with its mountains and valleys, rivers and seas, teeming with all kinds of life. Theirs is not a "poky little universe". Has Dawkins never read Psalms 19, 104 or 148? In these songs, the universe in all its wondrous diversity and splendour declares the glory of God. All created things exist to praise the name of the Lord whose glory is above earth and heaven. Christians have a capacity for awe but we will not limit ourselves to wondering at the mysteries of time and space. Ultimately we stand astounded before our infinitely wonderful God. Creationist literature, in limiting itself to the scientific arguments often fails to convey the sheer, uninhibited joy of the creation Psalms. These biblical songs should inform our apologetic. We need to allow not just Genesis 1, but the whole rich variety of biblical witnesses to testify of God's creative work. We don't simply want to win arguments, but invite people to experience the wonder of having a God entranced vision of creation. The alternative is not a universe of which we may stand in reverential awe, but a terrifyingly pitiless prospect. Here is Dawkins on life in a godless universe,
"Such a universe would be neither good or bad in intention. It would manifest no intentions of any kind. In a universe of blind physical forces and genetic replication, some people are going to get hurt, other people are going to get lucky, and you won't find any rhyme or reason in it, or any justice. The universe that we observe has precisely the properties that we should expect if there is, at bottom, no design, no purpose, no evil and no good, but blind, pitiless indifference." (Cited in "Does God believe in Atheists" by John Blanchard, from an article by Dawkins in the UK Daily Telegraph 10 May 1995)
The Christian vision is far different,
Heaven above is softer blue,
earth below is sweeter green,
something lives in every hue,
Christless eyes have never seen.
(From the hymn Loved with everlasting love by George Wade Robinson (1838-77)
Let's discuss the fossil record and exegete Genesis 1 accurately. But let us also invite people to consider the Bible's alluringly beautiful, rich and deeply moving account of creation. May all that breathe join in the great chorus of praise that echoes through the universe singing, "the heavens declare the glory of God".
Sticking with this theme, in the next day or so, I plan to post on the drama of creation, where I hope to reflect on creation, redemption and new the creation.
Posted by Guy Davies at 2:18 pm

Brilliant post. As one who has had more than enough silliness about this, this is a huge breath of fresh air. What a discovery: that the doctrine of creation is good news!

Mind you, we are experiencing a bit of Gen 6-9 at the moment up in Oxfordshire...

Thanks Michael, In the next post on the drama of creation, (posted above), I make reference to the floods as an example of the effect of the fall upon creation.