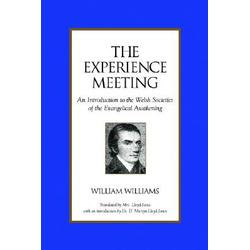 During the Evangelical Revival in 18th Century Wales, converts to the Calvinistic Methodist cause were gathered into small groups to share their spiritual experiences. I think that it is a good thing for Christians to testify to their experience of the Lord and his ways. We had such a meeting on Wednesday evening and it was wonderful to hear the saints speaking of God's goodness to them during the last year. Some had known times of trial, but each was able to speak of the Lord's help and grace.
William Williams is better known these days for his hymns, but he was also preacher of the gospel and a discerning spiritual leader in the Calvinistic Methodist movement. He wrote a book, The Experience Meeting, to commend such meetings to believers and to give guidance on how they were to be conducted. This book was translated from the original Welsh by Bethan Lloyd-Jones, wife of the famous preacher Dr. D. Martyn Lloyd-Jones. My copy was jointly published by Evangelical Press and The Evangelical Movement of Wales back in 1973. The work has since been reprinted by Regent College Publishing (here).
I would commend experience meetings to pastors and church leaders. Believers may at first feel a little reticent about sharing their experiences, but it is worth persevering. It is moving to hear of the Lord's dealings with our people. We can pray more meaningfully for one another as we open up and speak of those things that are closest to our hearts. These meetings can be a real stimulus to experiential godliness and life in the Spirit.
Williams' book takes the form of an imaginary dialogue between Theophilus, a wise spiritual counsellor and Eusebius, a new convert. Theophilus explains to his young friend why experience meetings can be profitable for believers. Here is one of his reasons,
"This kind of meeting is profitable because it gives us the opportunity to declare the work of God on our souls, and to praise His name for it. David calls upon the saints (Psalm 66:16) saying: 'Come and hear, all ye that fear God, and I will declare what he hath done for my soul'. And everyone, who is of the same spirit as David, again longs to declare the great things that God has done to him, wanting all the Lord's people to give thanks on his behalf. Oh! how difficult it is for a man who has received great treasures, and those unexpectedly, either from a loved one or in any other way, not to reveal this to all those who would rejoice with him! The woman who found the silver piece that she had lost could not conceal the matter, but called her friends together, saying: 'Rejoice with me; for I have found the piece which I had lost'. How much greater the desire of the godly man, who has been long in darkness and has now come into the light, to tell of the Lord's mercies to him! Oh! the joy of contemplating forgiveness of sins! Of viewing the eternal love of the Lord and the treasures of grace in the promises of the New Covenant! - it is such that a believer cannot refrain from telling it forth with the greatest joy." (p. 16).
Posted by Guy Davies at 9:10 pm

Greetings from Upstate New York! Just happened to be doing a google search on William Williams and your blog came up. Enjoyed reading some of your posts. I am particularly curious as to why the hymns of Williams seem to go unpublished. Are they even translated into english? And for that matter, are there any sermons of Daniel Rowlands in existence? Any light you could shed on this would be greatly appreciated!

Some of Williams' hymns have been translated into English and are sung in UK churches today. A fellow blogger has posted some here:

You can also find some Daniel Rowland sermons in English here:

Hi, bit of a long shot here but I was wondering do you have a list of the questions they used in these meetings