Pierced for our Transgressions, a review 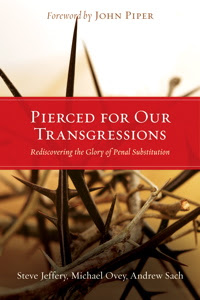 "The fact is that the cross isn't a form of cosmic child abuse - a vengeful Father, punishing his Son for an offence he has not even committed." (The Lost Message of Jesus, Zondervan, 2003, p. 182)

Do you think that the cross is a form of cosmic child abuse?

Neither does Steve Chalke...

I think we've been over this one before. In an online article, Chalke makes it clear that in his view, penal substitution makes the cross into an act of cosmic child abuse:

I think it's really interesting that the Eastern church has never accepted penal substitution the way the Western church has. They see Jesus' life and death as more of a rescue mission than God ransoming us from the devil. For them, the issue is more about death than guilt. Their model of the atonement is "incarnational"...Jesus became human so that we may once again be united to God and participate in the divine life of God. I think this is emerging more clearly in Western theology as the "Christus Victor" theory of the atonement. Admittedly, I sort of like that view more than a God who can't forgive without killing something first.

I think that the Bible is pretty clear that God forgives sin on the basis of blood sacrifice. That is certainly the message of the Old Testament sacrificial system as summarised by Hebrews 9:22, "without the shedding of blood there is no remission". See also Ephesians 1:7, "In him we have redemption through his blood, the forgiveness of sins according to the riches of his grace." God pardons sin on the basis of sacrificial death, because he forgives justly.

Christ triumphed over the devil because he bore the penalty of sin on the cross, fulfilling the law so that we might be forgiven (Colossians 2:13-15). As Sinclair Ferguson said recently, "We cannot have Christus Victor without Christus Propitiator."

The incarnation on its own could not have saved us. Christ became man to die for our sins. The Eastern model does not necessarily exclude penal substitution. The book reviewed cites formative Eastern theologians Athanasius and Gregory of Nazianzus in this respect. But the West has not always given due emphasis to the fact that believers partake of the divine nature in Christ. See my posts on this under Favourite Posts and Series on the main blog page.

The book itself gives a more detailed response to the issues you raise.

The fact of the matter is, is that there are not really many (if any) outright penal metaphors of atonement without other pictures used - i.e. sacrifice (as you yourself show), Christus Victor (as mentioned), propitiatory, etc., etc.

I ascribe to penal substitution whole-heartedly but I don't place it in hegemony over the others. It is a useful metaphor for conceiving of the atonement but it is not a pervasive image. The problems arise when you seek to squeeze God's action within human language - that, in every case, will reduce down the full scale of the divine act.

I've enjoyed your review of this excellent book, andl also the comments here in the thread. I think that what may be lacking in the meta here is a serious engagement with the authors' arguments. For me Pierced for Our Transgressions represents a major hurdle for anyone who would deny/demote/question the doctrine of penal substitution, precisely because of the way in which it allows the Bible to speak for itself. The message of this book is the message of the Bible, and of historic evangelical Christianity to boot.

I reviewed the book on my own blog a couple of weeks ago, and my conclusions are exactly the same as your own.

Thanks for giving this superb book such good airtime here at Exiled Preacher.

I am definitely going to read the book. This is core to the gospel.

The book is careful to not to allow PSA to swamp all other biblical perspectives on the cross.

Thanks Andrew! I saw your review. Glad you enjoyed the book too.

"The book is careful to not to allow PSA to swamp all other biblical perspectives on the cross."

Which is precisely what your readers are suggesting it should do in their comments...

I'm not sure that anyone is saying that, Jon. But some strange people do sometimes turn up here...

"This is core to the gospel"

Sorry to bang on Guy but the implication is that PS is the only true notion of atonement upon which all the others rely...

Well, if death is the penalty for sin (which it is - Rom 6:23), then the fact that Christ died for our sins is a core gospel truth (1 Cor 15:1-5). This is not the only thing that should be said about the cross, neither is it the entire gospel, but it is pretty important. Wouldn't you agree?

I think you have to be careful when you construct any notion of PSA. I agree yes that Jesus takes the sin of the sinner upon himself. Yes that is a core doctrine of the Church. However, the notion of Christus Victor is equally important - Christ died to conquer sin. Without this any notion of PSA would be, ultimately, fruitless. Repeat this for any metaphor or model of the atonement and you lose something of the wonderful richness of Christ's death on the cross.

Where I do agree with Chalke (although this is probably only an agreement of attitude - please do not misconstrue me - I hardly follow everything he says) is that the notion of PSA should NOT make the cross into a form of cosmic child abuse. Were it to do this, you must agree, there would be a problem with it.

I see the problems as dual - the doctrine is being pulled apart from two sides. On one side, there are those who seek to defend their evangelicalism to the death by staking their all upon PSA - that is not only bad theology, but detrimental to the gospel. To reduce down the atonement to PSA (which is amazing I know but the cross is so much more than the sum of its parts - this should really make us worship God! Imagine the many different ways he has saved us!) is to reduce down the gospel. Secondly, we have those evangelicals who are committed to PSA not thinking through the issues which are raised by PSA, assuming that AFFIRMATION is everything. One should not just construct a theory and leave it hanging but must work through it.

Sorry to be rambling and long and to seem polemic. My desire is that the atonement is not reduced down to a pithy evangelical formula.

You should really get hold of and review Stephen Holmes' new book "The Wonderous Cross" - he looks at various issues surrounding the evangelical notions of the atonement.

I've seen a review of Holmes book over at Jason Goroncy's blog. But I haven't got it yet.

Have you actually read PFOT? The writers are careful to stress that PSA is not the be-all-and-end-all of the cross. They stress the importance of other perspectives such as Christus Victor. They are also careful to explain PSA in a way that does not construe the doctrine as cosmic child abuse. If you haven't already, give the book itself a read, because I think that it will answer your concerns.

I don't have a problem with the book in the slightest. I imagine I would agree with the authors almost completely. However, what I dislike (as I'm sure the authors would too) is the jingoistic, cavalier attitude of those who jump on the bandwagon and promote the book as the saviour of evangelicalism. I appreciate that you are not one of these people Guy and I appreciate the seriousness with which you face the big theological questions so thanks for dialoguing.

I will try to get this book read and will no doubt enjoy it. Thanks for the review!

The crucial importance of penal substitution needs to be emphasised within evangelicalism at present precisely because it is at this point that the gospel is being attacked. It certainly is not the only model for understanding Christ's work, but surely the gospel must be defended where it is attacked.

I think Jon has a point in that it's important that PSA isn't made into a bandwagon, but Chalke has thrown a hand grenade into the Christian world which must be responded to strongly and extensively.