As Lloyd-Jones once said... 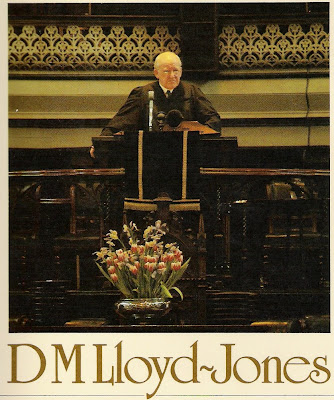 In my review of Iain Murray's Lloyd-Jones Messenger of Grace, I deplored the tendency of some to quote "the Doctor" in such a way that all discussion is brought to a halt, as if his opinion is our final authority. Having said that, Murray includes many thought-provoking nuggets of wisdom in the chapter, Some Convictions of Lloyd-Jones in Minature. Here are a few of my favourites:
"Some tend to think that Christianity is a matter of being nice. But niceness is purely biological. One dog can be nicer than another."

"We have come to realise that a man can be educated and cultured and still be a beast!"

"Putting all the ecclesiastical corpses into one graveyard will not bring about a resurrection!"

"A man who does not realise that he himself is his own biggest problem is a mere tyro!"

"The men who have accomplished most in this world have always been theologically minded."
Posted by Guy Davies at 8:29 pm

Email ThisBlogThis!Share to TwitterShare to FacebookShare to Pinterest
Labels: Lloyd-Jones

Of course. I only reviewed it under the correct title in the post below.