John Calvin on the resurrection of the body (7)

The Resurrection of the Wicked & Concluding Reflections 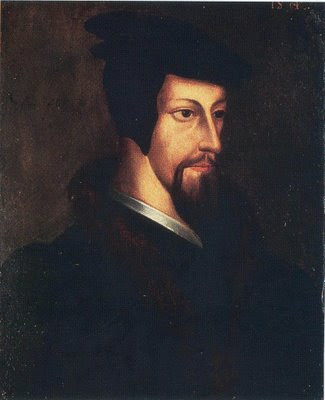 This series on John Calvin and the resurrection of the body has been on hold since about this time last year, so I thought that it was about time to wrap things up. (All quotes from The Institutes of the Christian Religion Book III:XXV - see here).

The Resurrection of the wicked

Following the emphasis of Scripture itself, Calvin gives greatest attention to the resurrection of the believer. But he does not neglect to say something on the resurrection of the wicked. He addresses the question, "How can the resurrection, which is a special benefit of Christ, be common to the ungodly, who are lying under the curse of God?" (III:XXV:9). In Adam all died. Does the promise of resurrection mean that all will be indiscriminately raised to life? Calvin regards such a universalistic option as "incongruous". He draws attention to the witness of Scripture on this matter. Christ will divide the sheep from the goats, Matthew 25:32. God in his common grace showers his blessings upon the righteous and wicked alike in this life. But this does not mean that they will share the same eternal destiny. The Reformer alludes to Paul's reaching in Romans 1:18-21, to argue that the wicked will be rendered all the more inexcusable and receive greater damnation for stubbornly refusing to acknowledge God's goodness.

Calvin dismisses annihilationism - the idea that the wicked will snuffed out of existence at death. He anticipates the argument of Jonathan Edwards, that sin against the infinite majesty of God deserves and infinite and unending punishment,

"It ought not to seem in any respect more absurd that there is to be an adventitious resurrection of the ungodly which will drag them against their will before the tribunal of Christ, whom they now refuse to receive as their master and teacher. To be consumed by death would be a light punishment were they not, in order to the punishment of their rebellion, to be sisted before the Judge whom they have provoked to a vengeance without measure and without end." (III:XXV:9).

In the light of prominent Evangelicals such as John Stott and Philip Edgecumbe Huges flirting with annihilationism in the latter part of the 20th century, Calvin's words should be carefully weighed. The wicked sin in the body and they will suffer eternal, conscious punishment in their resurrected bodies. The Reformer dwells on the nature of that punishment,

"Moreover, as language cannot describe the severity of the divine vengeance on the reprobate, their pains and torments are figured to us by corporeal things, such as darkness, wailing and gnashing of teeth, inextinguishable fire, the ever-gnawing worm (Matthew 8:12, 22:13; Mark 9:43, Isaiah 66:24)." (III:XXV:12).

Is there a more than a figurative dimension to the "corporeal" or bodily aspect of the Bible's teaching? The wicked will be raised up bodily to suffer eternal punishment. This is too awful to contemplate. But it is part of the witness of Scripture which cannot be rejected simply because it we find it emotionally disturbing. We should be disturbed! Consideration of these things should make us ponder the terrible consequences of being alienated from God, both for ourselves and for others. Calvin conjures a terrible picture of the whole creation acting as an instrument of judgement upon the ungodly, "Next, all the creatures are the instruments of his judgment, so that those to whom the Lord will thus publicly manifest his anger will feel that heaven, and earth, and sea, all beings, animate and inanimate, are, as it were, inflamed with dire indignation against them, and armed for their destruction." (III:XXV:12). This is no mere linguistic extravagance, but a true prelude to the day of judgement. Calvin concludes with a thundering exhortation,

"Hence unhappy consciences find no rest, but are vexed and driven about by a dire whirlwind, feeling as if torn by an angry God, pierced through with deadly darts, terrified by his thunderbolts and crushed by the weight of his hand; so that it were easier to plunge into abysses and whirlpools than endure these terrors for a moment. How fearful, then, must it be to be thus beset throughout eternity! On this subject there is a memorable passage in the ninetieth Psalm: Although God by a mere look scatters all mortals, and brings them to nought, yet as his worshippers are more timid in this world, he urges them the more, that he may stimulate then, while burdened with the cross to press onward until he himself shall be all in all." (III:XXV:12).

Calvin certainly does not shy away from setting before us the biblical teaching on the resurrection of the wicked in all its sombre reality. But he does not make this the main point of his consideration of the resurrection of the body, "But although we are to hold, as already observed and as is contained in the celebrated confession of Paul to Felix, “That there shall be a resurrection of the dead, both of the just and unjust,” (Acts 24:15); yet Scripture more frequently sets forth the resurrection as intended, along with celestial glory, for the children of God only: because, properly speaking, Christ comes not for the destruction, but for the salvation of the world: and, therefore, in the [Apostle's] Creed the life of blessedness only is mentioned." (III:XXV:9).

Over the course of this series we have considered the various features of Calvin's highly compressed and yet comprehensive teaching on the resurrection of the body as set out in the Institutes. There can be no doubt that the Reformer grasped the importance of the resurrection hope for the Christian faith. The believer's resurrection is rooted in his union with Christ. He provides the model and dynamic of his people's resurrection glory. We shall be raised like Christ by Christ. Reformed systematic theology has not always given the attention it should to the resurrection of Christ. In terms of the loci of systematics, it is usually the case that Christ's atonement is discussed, followed by consideration of the application of redemption. It is as if we could be saved by a dead Jesus. Richard Gaffin has done sterling work to redress the balance in a more biblical direction, especially in his Resurrection and Redemption, P&R, 1987, where he says, "Justification, adoption, sanctification, and glorification all have a common redemptive-historical, resurrection-qualified origin and complexion. Further, as with Christ, so with believers, these are not distinct acts but different facets of a single act, in the case of the latter, the act of being raised with Christ, that is, being united to Christ as resurrected." (p. 136).

We have a lot to learn then, from Calvin's rich and helpful teaching on this subject. But beyond giving us some valuable theological insights, John Calvin directs us to the believer's ultimate hope - that we shall share in the glory of the risen Lord,

"Peter declares that the purpose for which believers are called is, that they may be “partakers of the divine nature,” (2 Peter 1:4). How so? Because “he shall come to be glorified in his saints and to be admired in all them that believe,” (2 Thessalonians 1:10). If our Lord will share his glory, power, and righteousness, with the elect, nay, will give himself to be enjoyed by them; and what is better still, will, in a manner, become one with them, let us remember that every kind of happiness is herein included. But when we have made great progress in thus meditating, let us understand that if the conceptions of our minds be contrasted with the sublimity of the mystery, we are still halting at the very entrance." (III:XXV:10).