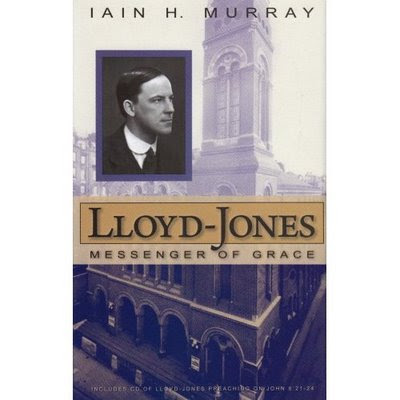 Nothing is more important than that you should listen to that CD Guy!

Actually it is a masterly presentation of the Gospel and well worth the listening effort. It could be recommended to anyone and everyone.

"How many of those who follow Lloyd-Jones in preaching series of expository sermons also maintain his commitment to preaching evangelistically?"

Let me count. I might need all the fingers on one hand.

But seriously, its a great question and one that 'certain' people have been asking for many years, particularly one very prominent London pastor who sat under the Doctor for three years and was married by him, who has always copied him in this respect.

My assistant Pastor lent me Preaching and Preachers and the other book that I have on my self that I haven't finished yet is Spiritual Depression. Both books are excellent and pastoral in nature.

P.S. I will come back and read more. I googled Gordon D Fee and your blog was listed.

I did hear Lloyd-Jones once - that was my excuse for not listening to the CD but we've been told now. What I liked best about the book was it's myth dispelling (or should that be disspelling - certainly not thispelling). As for JH's question. There's plenthy of it in Wales. Does anyone use all 3 Lloyd-Jones styles (am teaching, pm evangelism and Friday night study)? I doubt it.

It wasn't my question, it was Guy's!

Ok, I've listened to the sermon this afternoon. Magnificent; unlike Gary Br, I've heard the Doctor many times, but this is him at his best I think. Perhaps one reason why there're so few ministers who follow his pattern is that we can't preach like this. But it's no excuse; and it's no help that there's plenty of it in Wales, either. When we've said all that needs to be said about the need to be ourselves rather than slavish imitators of others, yet still the need to preach evangelistically cries out.